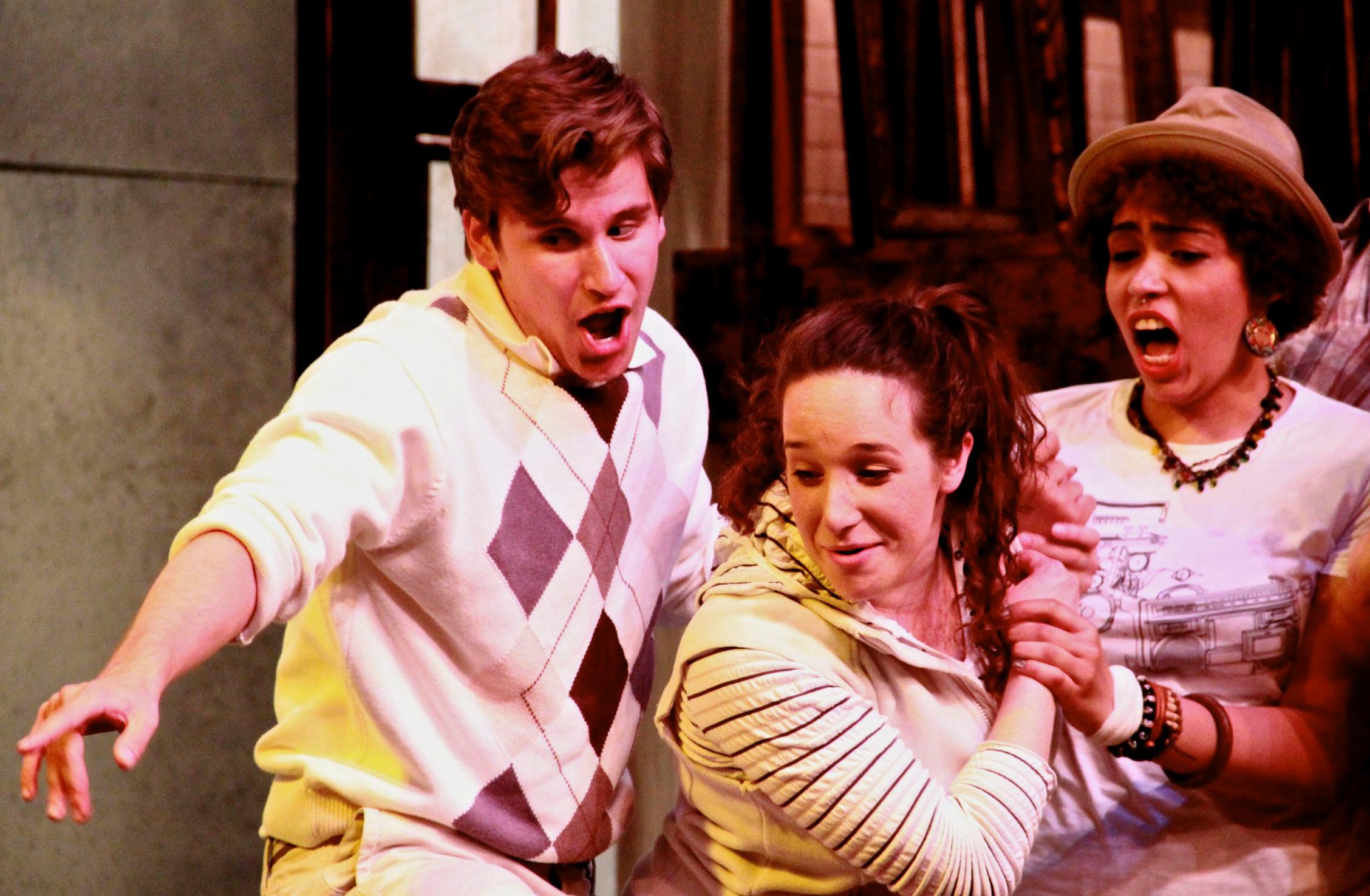 As the artistic counterpart to Lawrence’s Substance Abuse and Mental Health Services Administration grant, the LU theatre program presented “Show Your Face(s): A Masque” Thursday, May 10 through Saturday, May 12.

A highly collaborative effort inspired by Question, Persuade, Refer suicide prevention training, the script to “Show Your Face(s)” was constructed from a variety of sources to examine the range of human emotion and to explore the “outcomes of hiding and sharing”.

Armed with the tough task of portraying inward and outward emotional states, “Show Your Face(s)” employed a variety of theatrical techniques to capture the essence of humanity’s most hallowed and joyous conditions. Continuously pondering feelings of invisibility for instance, “Show Your Face(s),” twisted traditional notions of the mask — and the masque, for that matter — in order to question individuals’ awareness of others and struggles with self-identity.

Furthermore, the play, as an assemblage of texts written by Lawrentians, community members and outside authors, operates as a series of diverse vignettes which seamlessly flow into one an other through the help of music and movement.

Symbolically, “Show Your Face(s)” is very rich. With masks reoccurring throughout, a smattering of simple clothing adorning the walls, and actors donning shades of white, grey and beige, the play creates a stark atmosphere that paints its characters as unremarkable, yet easy to empathize with. Indeed, there is an overwhelming sense that any of “Faces”‘ frustrated, lonely or blissful characters could be you.

Garnering such empathy by developing a seamless and ever-shifting array of social, familial and romantic situations, “Show Your Face(s)” lets viewers into the lives of everyone. From the childhood isolation to the excitement of a sports team prior to game time, a disconnected married couple and a nervous young girl waiting for her crush, “Faces”‘ plethora of vignettes weave together to form a colorful patchwork of human desire, loss and hope.

That being said, while “Show Your Face(s)” is undoubtedly all-encompassing, its diversity in presentation, creates an at-times disjointed appearance. Differing in dialogue from scene to scene, some vignettes are much more memorable than others.

Clearly, in attempting to portray a variety of emotional perspectives, certain vignettes lend themselves to more speech, while others develop their identity through simple catch-phrases: some scenes raised grand questions and others focused on bodily motion, visual text or repetition of a mantra.

In the end though, Lawrence’s fantastic ensemble of actors ultimately won the crowd over and the play’s highly detailed set demonstrated tremendous levels of dedication. Additionally, in utilizing music completely composed by Lawrence students and alums, “Show Your Face(s)” was able to showcase another world of LU artistry.

Furthermore, a major highlight from “Show Your Face(s): A Masque” was a monologue performed by freshman transfer student Sarah Jane Rennick towards the play’s end. Serving as a culmination of the work’s emotional exploration, Rennick’s lengthy speech traversed a conversation between a mother and daughter, striking to the heart of hope and allowing the production to revel in its goal of taking off a mask, to unveil a the numerous possibilities within human emotion.