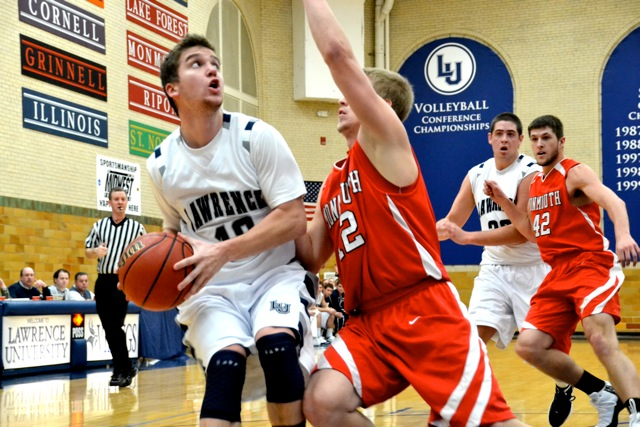 Last Saturday afternoon, the Lawrence University men’s basketball team hosted conference rival Monmouth College at Alexander Gym, and won 67-63. The two teams had locked horns once earlier this season at Monmouth where the Vikings won convincingly by a score of 87-74, driven by Tyler Crisman’s 29 points.

However, going into Saturday’s contest, both teams held 2-5 records within the conference — and Monmouth had the momentum, coming off a victory against a Carroll University squad that had defeated Lawrence earlier in the week. Lawrence was still reeling from an exhausting loss to a tough Grinnell team from the night before.

As advertised, the matchup was a well-balanced one, and the first half of the game was a seesaw affair. The lead changed hands five times, and the score was tied five times. At one point Lawrence held a nine-point lead, but ultimately was unable to pull away. If one team made a run, the other would counter with a run of its own.

The first half was dominated by defense and some sloppy offense by both teams. In particular, Lawrence was having difficulty hitting any shots from distance and at times coming up with rebounds. Six seconds before the half, first year basketball player Tyler Mazur — although a junior at Lawrence — nailed a three-point shot to give the team a 31-27 lead going into the break.

Monmouth came out in the second half surging, and took a 40-35 lead after just seven minutes of play. After a timely time-out by Lawrence, junior Conor Klusendorf scored five points consecutively to tie up the game at 40.

After Lawrence lost the lead once again, sophomore Davis DeWolfe knocked down a huge three point shot to give Lawrence a lead they wouldn’t relinquish. DeWolfe proved to be the player of the game, as the big man gracefully hit three of four shots from behind the arc, and finished with a total of 17 points.

After DeWolfe’s three, Lawrence took off, going on an 11-0 run that was capped by a three-point shot from sophomore Max Burgess. Crisman also proved key, as he finished with 16 points of his own with four assists and two steals.

With the score at 53-44 and less than seven minutes to play, Monmouth cut the lead to two at the 2:48 mark. After a layup from Crisman and a defensive rebound by DeWolfe, Lawrence took commanding control and the momentum. Monmouth kept it close until the end, but with 30 seconds left, Monmouth began fouling and Lawrence made their free throws ending the threat of a comeback. It was a strong team win that highlighted several stand out performances from many players.

Lawrence looks to build upon last Saturday’s action at Knox College, where they will play this Saturday, Jan. 20.