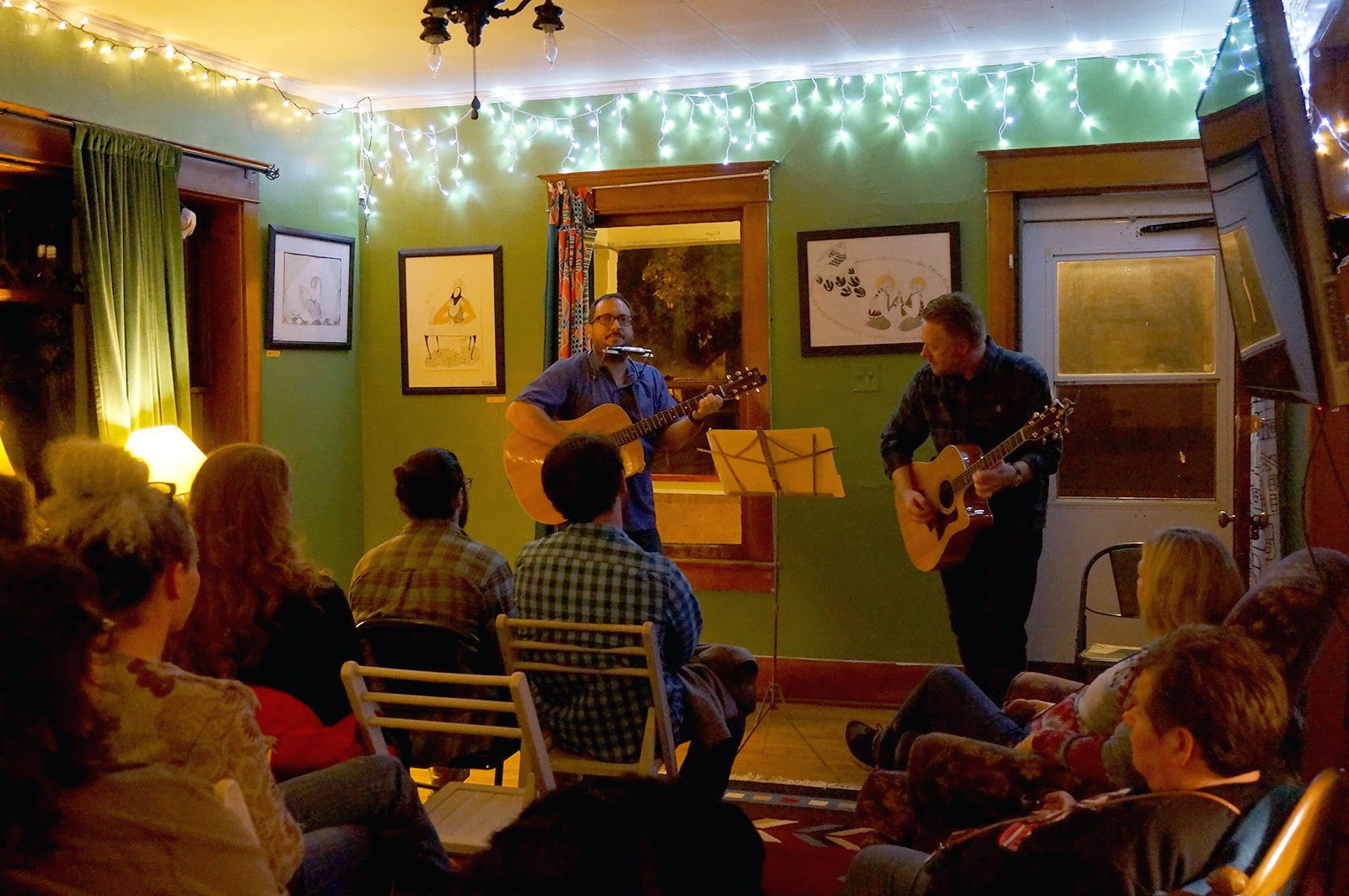 This past Saturday, Oct. 1, singer-songwriter guitarists Ian Moore and Derek Pritzl graced the welcoming living room of Appleton’s 602 Club. Located on 602 N. Lawe Street, the unique venue—which is a house and not a small concert hall like one might expect—hosts many different events including—but not limited to—concerts, book discussions and candlelit yoga. I have been to a few concerts there since I heard about it last year and have enjoyed each immensely. The programmers do a wonderful job of showcasing the cream of the crop of many types of music, so although I had never heard of Moore or Pritzl, I knew it would be a mistake not to go, having a special place in my heart for folk artists rooted deep in the tradition.

As I walked in to the warm house full of people, I smelled a home-cooked potluck, saw two friendly dogs and thus experienced immediate affirmation that I had made the right choice. The calm, joyous atmosphere was only enriched when Moore stood in the front of the living room and began to play and sing. He had an assertive yet thin voice, strangely reminding me of John Linnell of They Might Be Giants, but pleasantly rough around the edges. His singing was accompanied by full, open chords on acoustic guitar, each individual note ringing out and bouncing around the room. Both sets were not microphoned, adding to the charm and ambience. Imagery of the Midwest interjected ambiguous personal feelings, and I felt connected and content, relishing the folk in this environment, as everyone around me seemed to as well. For the last few songs of his set, Moore was joined by his friend, and their close harmonies and powerful guitar playing echoed into the break before Pritzl’s set.

During the short break, the attendees talked and ate, everyone enjoying each other’s company. Most of the concert-goers were close friends with the performers, and I recognized a few townies that frequent experimental concerts at Lawrence such as ImprovisationaLU and IGLU recitals. But other than that and the friend I went with, I was outside of Lawrence’s music scene but still felt at home. As much as I love the concerts and people at Lawrence, it is nice to step out and into a different community of music-lovers. I even see it as vital for me, no matter how much I enjoy one venue or community over the others. As the break simmered down, Pritzl got comfy on his chair, guitar ready and drink in hand.

A completely different songwriter than Moore, Pritzl lightly picked his acoustic, sometimes barely being audible. Dexterously moving from note to note, it was the perfect accompaniment for his often soulful and quiet voice. At times, his voice was raspy, but the perfect amount so, and its roughness increased as he sang louder, giving his voice character. This character was especially true due to the contrast it had with guitar. Each note he plucked out was sweet and delicate, no matter the range or dynamic. He effortlessly played basslines, little melodies, licks and ornaments on the six strings—sometimes simultaneously—adding a whole new dimension to the simple chord progressions. With his technical abilities meshing with musicality, the sounds had so much life in them, smoothing and crackling underneath his voice.

While his fluid, warm guitar playing is what originally drew me in, I became just as hooked on Pritzl’s genuine, humor-infused lyrics and personality. The distinction between his stories in between songs and the songs themselves was minimal, and the two built off of each other perfectly. Being so familiar with his songs, Prizl delivered each with the looseness and honesty of his stories, opening himself up to the audience. His stories—both through talking and singing—covered a wide range of topics such as heartbreak, travelling all around the States, working and kicking back with friends and family. Although fairly normal and relatable subjects, he painted them in a beautiful way, bringing the audience to each specific moment. He made such an effort to create a community within the venue, which did not go unnoticed—the audience smiled and laughed with him, with open ears and warmness to both him as a person and as a musician.

I left the event with an eagerness to go back to the 602 Club for yet another unique performance, and to see both songwriters. It is one of the best feelings to be able to see a performance of some people I have never heard of, connect with them and then write about it.
You can follow the 602 Club, Moore and Pritzl through their Facebook pages.

Guest singer-songwriters play at the 602 Club at 602 N. Lawe St. Photo by Angelica Hurtado This past Saturday, Oct. 1, singer-songwriter guitarists Ian Moore and Derek Pritzl graced the welcoming living room of Appleton’s 602 Club. Located on 602 N. Lawe Street, the unique venue—which is a house and not a small concert hall…