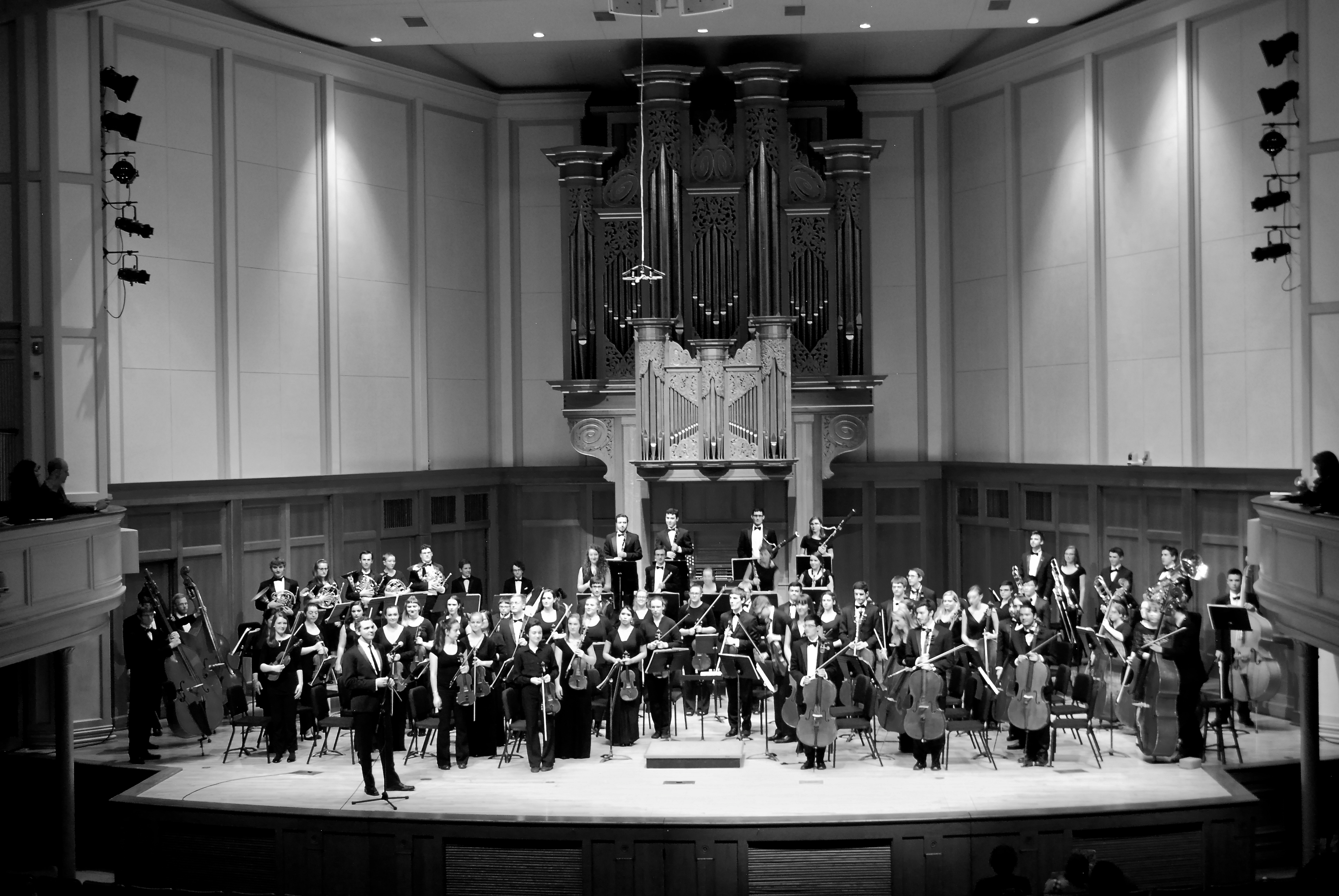 The LSO performs under the baton of maestro Mark Dupere in the Lawrence Memorial Chapel.
Photo by Angelica Hurtado

Friday, Oct. 14 marked the first concert of the year for the Lawrence University Symphony Orchestra (LSO). Additionally, it was their premier performance with Assistant Professor of Music and Director of Orchestral Studies Mark Dupere. Titled “Folk and Folklore,” the orchestra performed a fanfare and two symphonies in the Lawrence Memorial Chapel. The excellent song selection made for a wonderful night of touching and well-performed music.

The orchestra began with “La Péri: Fanfare” by Paul Dukas. The piece was a short but brilliant feature of the brass section, and it opened with resplendent and grandiose harmonies. It also featured a slower and calmer section before ending with another dramatic crescendo. The fanfare was a fine opener; however, the real meat of the performance had not yet begun.
The orchestra’s next piece was the challenging “Symphony No. 104 in D major” by Franz Joseph Haydn. Lasting about 28 minutes, the symphony was composed of four movements, each one equally entrancing and beautiful. The orchestra performed with natural horns, similar to the instruments that would’ve been used during Haydn’s career.

The piece started in dramatic unison, but immediately slowed to a calm, sweet and romantic melody. The orchestra played the sudden tempo and dynamic changes impressively well. Quiet sections were played with such precision and delicacy, while the magnificent crescendos seemed to breathe life into the audience. The third movement showed off the orchestra’s clean releases on each rest, and the melody lines were strongly complimented by the percussionists. The Finale was full of fast-paced, busy and complex lines, ending the symphony on a high note.

After a brief intermission, the orchestra ended the night with Peter Tchaikovsky’s “Symphony No. 2 in C minor.” The first movement started with a loud hit, and a beautiful and moving horn solo immediately followed it. After a calmer section, the harmonies of the strings suggested something was brewing, and an impressive forte section filled up the Chapel. The grandeur of the horns brought tears to my eyes; this moment was the climax of the concert.

This symphony takes melodies from several folk songs, and this was apparent in its jubilant, warming and rustic sounds. The third movement was fast, intricate and featured rapid fluttering of flute and clarinet. The finale was full of broad, exquisite harmonies that were nearly danceable. Electrifying energy from the musicians could be felt by every audience member. A gong was rung, and the symphony ended in a presto section full of vitality.

Throughout most of the “Folk and Folklore” performance, the orchestra was in a state of focus; every bow rose and fell precisely together. Each piece was played with extreme seriousness. But every once and a while, if you were lucky enough, you could catch a few of the students smiling over at each other. Presumably, these actions could be explained by extreme satisfaction at the beauty of the music they produced. It was touching. Any member of the audience was lucky to witness such a phenomenal first concert.

The LSO performs under the baton of maestro Mark Dupere in the Lawrence Memorial Chapel. Photo by Angelica Hurtado Friday, Oct. 14 marked the first concert of the year for the Lawrence University Symphony Orchestra (LSO). Additionally, it was their premier performance with Assistant Professor of Music and Director of Orchestral Studies Mark Dupere. Titled…