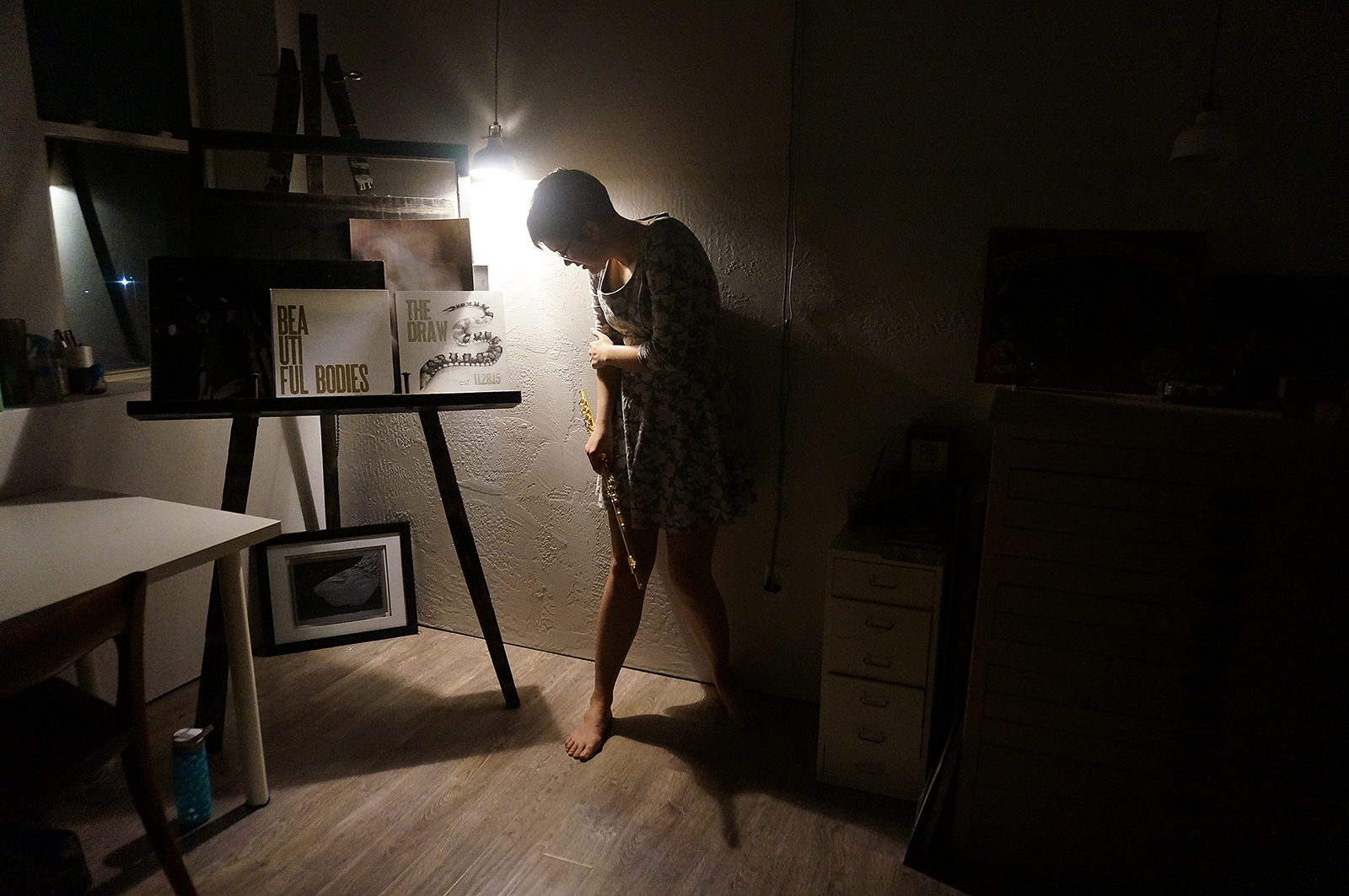 Junior Emma Reading, flute, performs in a micro-opera at “The Draw.”
Photo by Angelica Hurtado

On Monday, Oct. 24, a group of Lawrentians performed a series of improvised micro-operas called “Straight from the Hip” at an off-campus venue—a nearby art gallery called The Draw.

The performances were directed by Matt Turner, Instructor of Music; Copeland Woodruff, Director of Opera Studies and Associate Professor of Music and Margaret Paek, Instructor of Dance. Comprised of students from the Improvisation Group of Lawrence University (IGLU), opera studies and the dance program, the performances confronted the topic of gun presence in our community and provided for a thought-provoking night.

In an untraditional but interesting format, the venue was split into eight different sections, each with a separate performance. In the first vignette, performers mimicked carefree children playing with toy guns. Gradually, this portrayal of guns as child’s play was replaced by feelings of fear and unrest. In a violent and spastic gesture, senior Nathan Montgomery symbolically morphed his guitar into a gun, and the rest of the performers fell to the ground, dead.

Following a similar theme, junior Nathan Brase’s performance, “On Top of The World and Falling,” was particularly dismal. He began by jovially singing, “I feel good today.” The performance took a dark turn as Brase began to writhe in pain and frustration, unable to complete the phrase he was shouting so confidently before. Insanity filled The Draw as Brase hysterically insisted he felt fine before raising a chair over his head in a violent and suicidal manner.

Upstairs, the performances were held in small rooms, making for a very intimate setting. One of the vignettes portrayed a happy group of people playing music until another performer emerged from behind a door. In a startling and creepy manner, the man approached the group, grabbing their instruments and creating a sense of unease and fear for everyone present.
The convincing and realistic nature of these scenes continually forced the audience to question the presence of guns.

In the vignette “Unpredictable Machine,” senior Lizzie Burmeister outstandingly played the role of a student who witnessed gun violence. Repeatedly, Burmeister stated that there was a bullet in the window by her locker. With each repetition of the phrase, she became more frantic and terrified until she eventually began to scream. In the background, instruments provided an uncontrollable cacophony of sound. It was a disturbing experience.

Each one of the performances equipped the audience with moving takes on gun presence. Throughout the event, IGLU musicians used their instruments to mimic the sounds of gunshots. This effect, matched with chilling singing, hushed whispers and bloodcurdling screams, often filled the venue with an extreme uneasiness. The event was not by any means lighthearted or pleasing, but it was not supposed to be. Instead, the audience left disquieted, questioning the important topic of gun presence—surely that is what the performers and directors of “Straight from the Hip” wanted to evoke.

Junior Emma Reading, flute, performs in a micro-opera at “The Draw.” Photo by Angelica Hurtado On Monday, Oct. 24, a group of Lawrentians performed a series of improvised micro-operas called “Straight from the Hip” at an off-campus venue—a nearby art gallery called The Draw. The performances were directed by Matt Turner, Instructor of Music; Copeland…