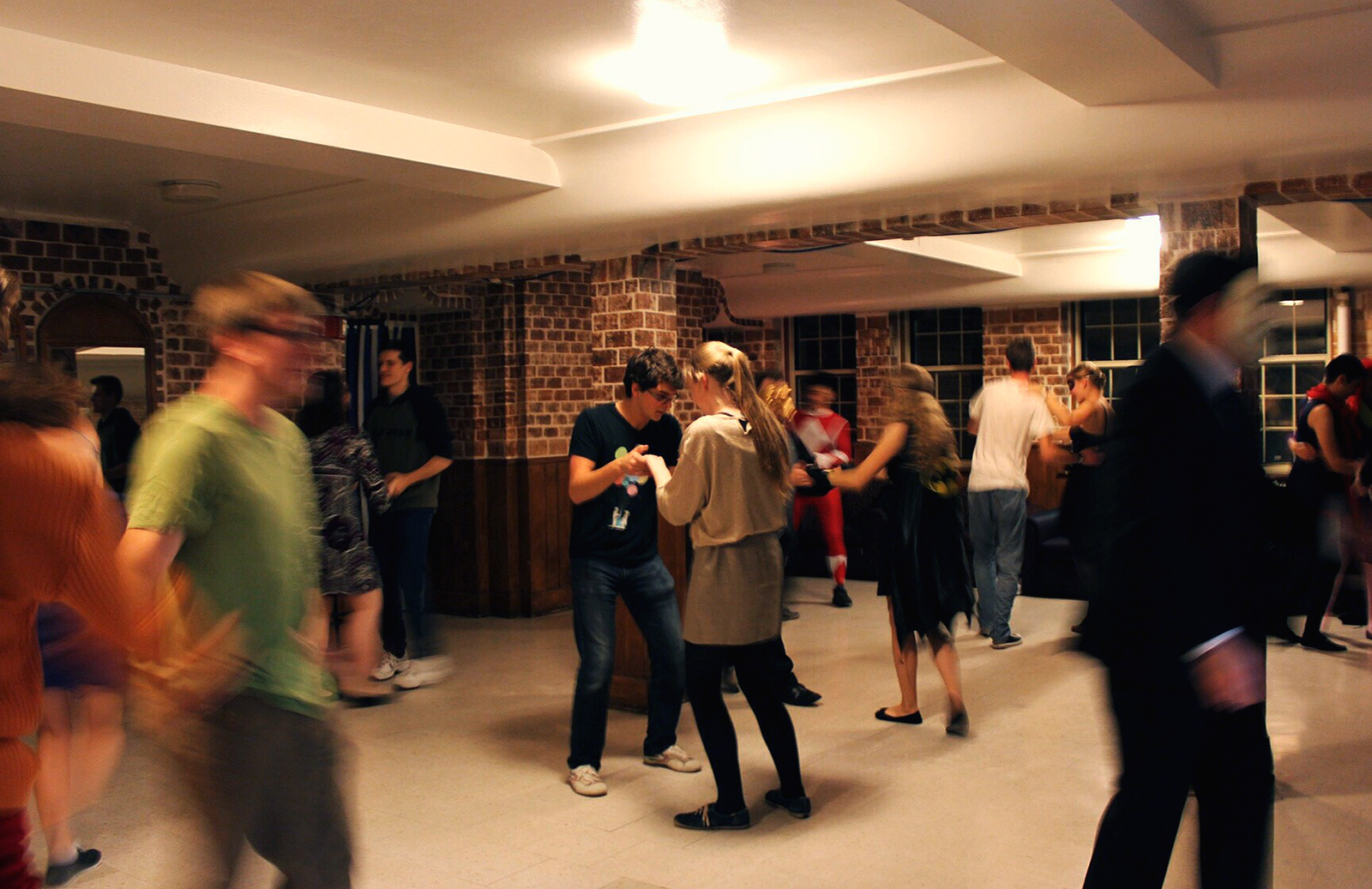 Students swing dance the night away.
Photo by Ben Tran

In honor of All-Things-Halloween, this past weekend the Lawrence Swing Dancers (LSD) hosted a Masquerade Swing Dance on Oct. 28 in the Swing House. Students showed up at the Swing House dressed in their costumes and masquerade masks to dance to some old-fashioned tunes and to kick-off the Halloween weekend.

“Swing dance club is a fun place where you can both learn a different way of dancing and meet new people,” stated freshman Tashi Haig, who attended the event dressed in her Eowyn of Rohan costume from “The Lord of the Rings.” When describing the event’s atmosphere, Haig said, “Everyone is very friendly and helpful to newcomers which I really appreciate.”
Additionally, freshman Joseph Wetzel, in attendance of the Halloween Masquerade, stated, “I like the swing dances for some of the same reasons I like team games. I like practicing something collaborative and getting better at it together.”

Created with an emphasis on teaching swing dance to individuals at all levels, LSD has been an official club at Lawrence since 2001, but was originally founded in 1998 by Dane Tice ’02 and Suzanne Butz ‘02. LSD covers many variations of swing dance styles, including Jitterbug, Charleston, West Coast Swing, East Coast Swing, Lindy Hop and the Modern Jive, just to name a few. The LSD started out with a focus on instruction in East Coast Swing, as well as a lesser focus on instruction in Lindy Hop.

The differences between East Coast Swing and Lindy Hop lie in how these dances evolved. East Coast Swing is a form of partner swing dancing that emerged in the 1940s when swing was in popular demand, but the already known Lindy Hop was viewed as potentially too difficult to newcomers. East Coast Swing is a fast moving swing that works under rock-n-roll or boogie-woogie style songs. Evidently, Lindy Hop preceded the emergence of East Coast Swing, developing throughout the ‘20s and ‘30s as the jazz era progressed. Lindy Hop is a mixture of several popular dances that prior to it, like tap and Charleston. It is built around both solo and partner work and is known for its more improvisational qualities.

Back to a more recent time, as of 2004, not only had LSD officially established their Swing House on campus, but they had also developed a much greater emphasis in instruction on Lindy Hop, encouraging this more improvisational and collaborative dance to be developed by all sorts of Lawrence students.

Super senior Sara Larsen started with LSD as a freshman by attending a few dances a term. By her junior year, she had become highly-involved with the group by becoming a member of the board. She stated, “I got involved because I really love to dance, and Lawrence Swing Dance seemed like the perfect group to do it with.”

Larsen also shared what swing dance meant to her. “Lawrence Swing Dance is important to me because it gives me an outlet for creative movement,” said Larsen. “This group also provides an environment full of learning, trying new things, improvising and sometimes just being silly! I love the community aspect of social dances and I love getting the opportunity to dance with old friends and brand new beginners.”

This weekend’s Halloween swing dance was a spooky success, and there are many more opportunities to learn more about the group and swing dancing. The Lawrence Swing Dancers host New Move Monday Lessons, lessons in Lindy Hop on Wednesdays, beginner lessons on Friday nights and following those Friday night lessons is a Swing Dance. All of these lessons go from 8 p.m. until 9 p.m. and on Fridays the Swing Dance takes place after the beginner lessons until 11 p.m. The Monday and Wednesday lessons are always in the basement of the Swing House, and the Friday lessons take place in whatever venue the Swing Dance will be held in that weekend.

Students swing dance the night away. Photo by Ben Tran In honor of All-Things-Halloween, this past weekend the Lawrence Swing Dancers (LSD) hosted a Masquerade Swing Dance on Oct. 28 in the Swing House. Students showed up at the Swing House dressed in their costumes and masquerade masks to dance to some old-fashioned tunes and…