Sell Us Your Major: Theatre Arts 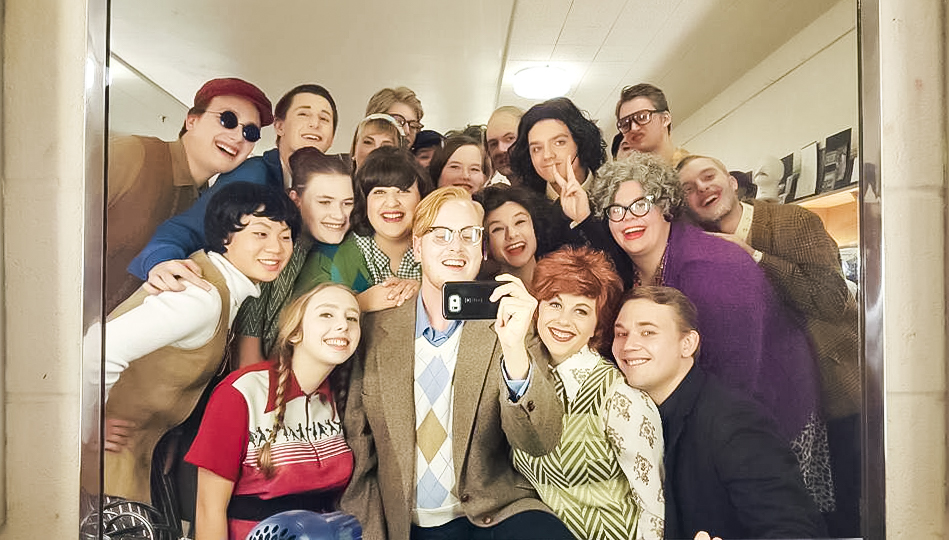 Cast of the fall play, A Man of No Importance, takes a selfie in full costume.
Photo courtesy of Matt Kierzek.

This column is devoted to sharing student and faculty input on the various majors offered at Lawrence. The goal is to highlight areas of study that are not well known and to provide undecided students an inside look at things they may want to study.

Here at Lawrence University, the many areas of study are not limited to the boundaries of its subject matter. This way of thinking applies in more ways than one to the Theatre Arts degree offered on campus. Learning how to weave theatrical stories requires knowledge pertaining to every aspect of how that story is created. In doing this, Lawrence University’s Theatre Arts department teaches about more than just how to put on a play, but also about the play as an integral component to our society and how we go about understanding one another.

Theatre Arts sets out to study theatre through understanding its history, literature and production. For students to learn how to share captivating stories on stage, they must be aware of every aspect of what goes into making a story captivating. This involves an educational foundation in performance techniques as well as administrative and technical training.

Theatre Arts meshes seamlessly into the ideals of a Liberal Arts Education. Troy stated, “I think it’s an ideal course of study for the liberal arts, because by the nature of making theatre you are integrating learning beyond just how to perform. You’re learning how to read a narrative critically and insightfully. There are plays about physicists so you have to learn about physicists. There’s plays about historical figures and you have to learn about their time and place and it just goes on. You can’t not be liberal arts in the theatre.”

Sophomore Mikaela Bolker stated, “In the department you hear a lot that if you study theatre you study everything. That’s true in a lot of ways. You have to know about so much about every play you work on. You’re going to need to know a lot about history, psychology and sociology. If you’re going to do a play, there are so many factors that all require research. By the time you do multiple productions, you’re going to know a lot more than just the story of the plays themselves.”

Bolker expressed that her favorite part about studying theatre is seeing a show put together from start to finish. She stated, “I just really like seeing something start from nothing and to see how that changes. To feel the excitement of seeing it go from having no set, no memorized lines to then move towards full costumes and the full production. It’s really cool thing for me.”

Students emerging from their Theatre Arts degree have a wide array of career options available for them. Troy stated, “We know how important theatre is to society and in that way every generation needs to learn from theatre in the past and push it forward. And that’s one of the thing that college theatre departments do. Additionally, the skills you learn from doing theatre are applicable to many other areas. So there’s no downsides, even if you don’t end up going into theatre. Learning how to communicate clearly, present well, organize as a group and maintain nonnegotiable deadlines are all good life skills.”

Troy and the rest of the theatre department place heavy emphasis on crafting their students into broad ‘theatre-makers.’ “There’s no ‘just’ in front of any role,” Troy explained. “I’m not ‘just’ an actor or ‘just’ a director. We hope that mindset is sort of melted away; made more permeable. Because you will do any of those individual roles better when you know about the entirety of it. All of the experiences feed into each other when I’m in the front of the room directing. We really hope our students get a feel for that, too.”

In studying Theatre Arts, students are studying snippets and snapshots of the complexities “Something that’s been really important for me is the time I spent last term in an ESL classroom,” Bolker said. “I got to see different world views than what I’d known before. I think it’s really useful to apply to a theatre because theatre requires you to understand things from new perspectives.”

The Theatre Arts Department at Lawrence is unique in that it celebrates every aspect of theatrical performance. It emphasizes deep and honest understanding of a story’s message and context. It advocates for the practice of understanding a play through research into that play’s content and it celebrates a play’s ability to expose new perspectives. Its faculty are working to push students to understand their role in a show in order to better understand their role in the world.