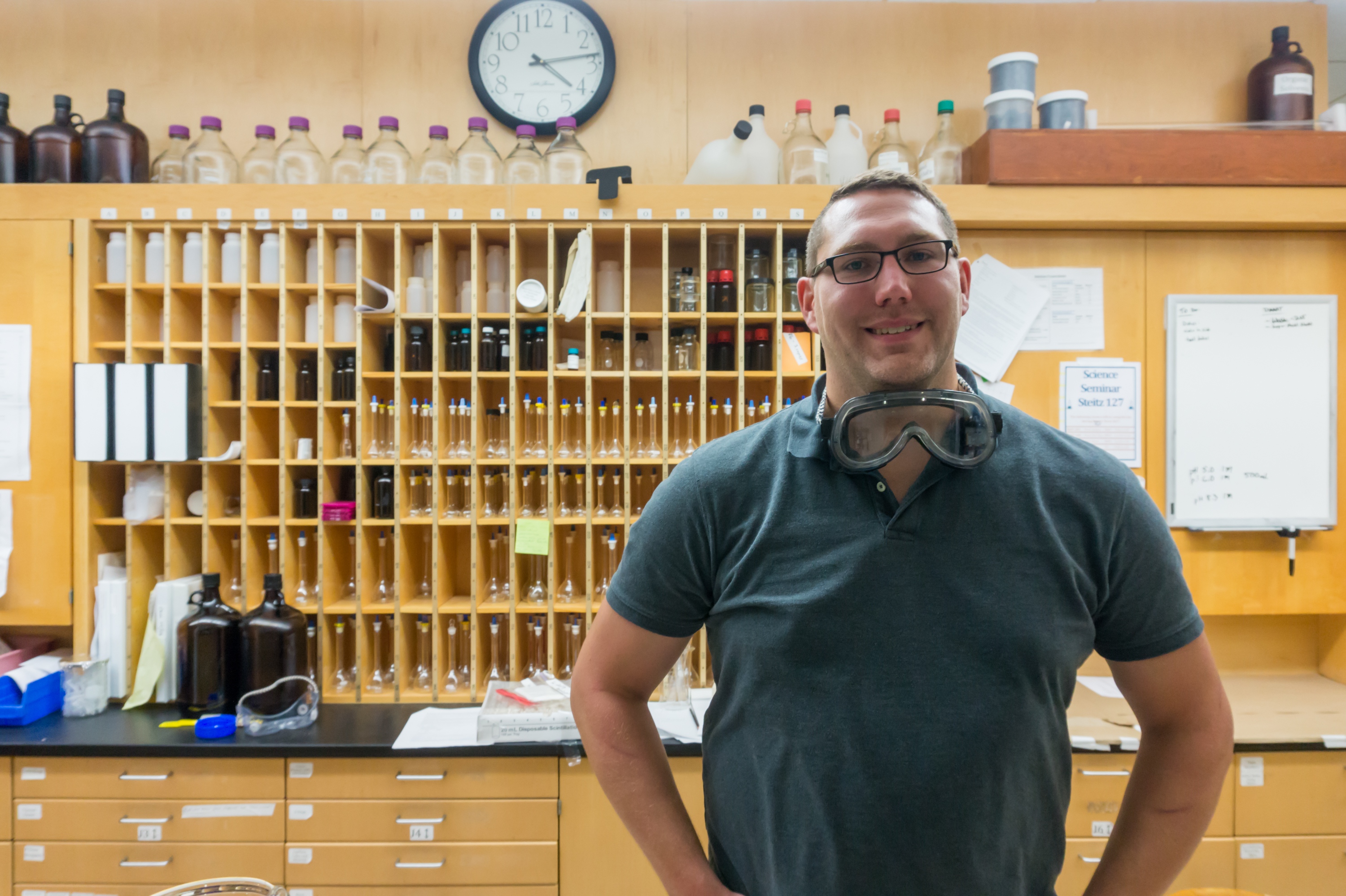 Lawrence University is a school that is no stranger to busy schedules and the community dabbling in many subjects. This hidden figure exemplifies the Jack-of-All-Trades archetype. Daniel Martin ‘07 is currently the Laboratory Supervisor for the Chemistry Department, as well as the Assistant Swimming & Diving Coach. Martin shared what he has been doing during his time at Lawrence as an alumnus.

Martin started his work at Lawrence as a student his freshman year, and graduated in 2007 with a B.A. in chemistry. As a student, Martin thought about majoring in physics and also gained exposure to anthropology and biomedical ethics. He still believes that ‘The Lawrence Difference’ is being exposed to different opportunities, ideas and thoughts at multiple levels. “I have been here for a long time, but it has not all been the same thing,” joked Martin.

Working in the Chemistry Department was not Martin’s first job. In fact, after he graduated, Martin worked in the Campus Life Office for one year. At the time, he filled a temporary position to help with assisting in trip registration, pre-trip planning and renting vans. As treasurer for the rowing team, Martin had learned accounting and finance budgeting prior to his Campus Life job. He then met Andrew Fleek, the current head swim coach and told him since he had been on the swim team as a student, he would be able to coach for the swim team at the same time his temporary job was ending. Martin then became assistant to the swim team for nine seasons and is now starting his tenth.

As the assistant of the swimming and diving team, Martin is dubbed “The Team Mom,” as he supervises on-deck practices, running workouts, timing the swimmers when they need to be on certain intervals, helping with submitting entries for meets, instructing student workers on keeping an eye on the timing system and handling the medical kit to help with emergencies when needed.

Martin has been working in the chemistry lab for the past five years. His duties entail ordering chemicals and supplies, setting up for the labs, having solutions prepared, turning on gases on nitrogen lines, supplying liquid nitrogen for the Nuclear Magnetic Resonance (NMR), providing gloves and safety goggles and coordinating with professors if they are working with a strong acid or dry ice. He believes it is important that the lab equipment is prepared and safe for student use.

When he is not working, Martin is occupied with three nieces and a nephew. He also enjoys bike rides around the area that are over 20 miles long. The longest distance he biked was 45 miles to his sister’s house. After a long day of work, Martin prefers relaxing on his porch.

Additionally, Martin likes taking vacations. Last year he took a train from Chicago to Colorado. He thought it would be better than a road trip. He grew up in Texas, and as a student he and his family would drive north to Wisconsin. He thought it was boring to drive by all of these rural areas just to arrive to an exciting destination. Martin has driven to North Carolina where he white water-rafted. Another time, he drove to Oklahoma, ‘couch surfed’ and met a local who showed him around Wichita, Kan.

Martin is inspired by people who help for the sake of helping out like volunteers for the Fox Cities Marathon or the Soul Burner 5K in the spring. They show up rain or shine with a positive attitude and willingness to lend a hand.

This description sounds very similar to Martin himself, who is always willing to lend a helping hand. This quality and many more make him an excellent Hidden Figure and long time member of the Lawrence community.

Chemistry Lab Supervisor and Assistant Swimming & Diving Coach Daniel Martin with equipment he helps manage. Photo by Larissa Davis This column is devoted to highlighting staff members that play a huge role in the everyday experiences of the Lawrence community. The goal is to focus on the “Hidden Figures” of Lawrence University and their…