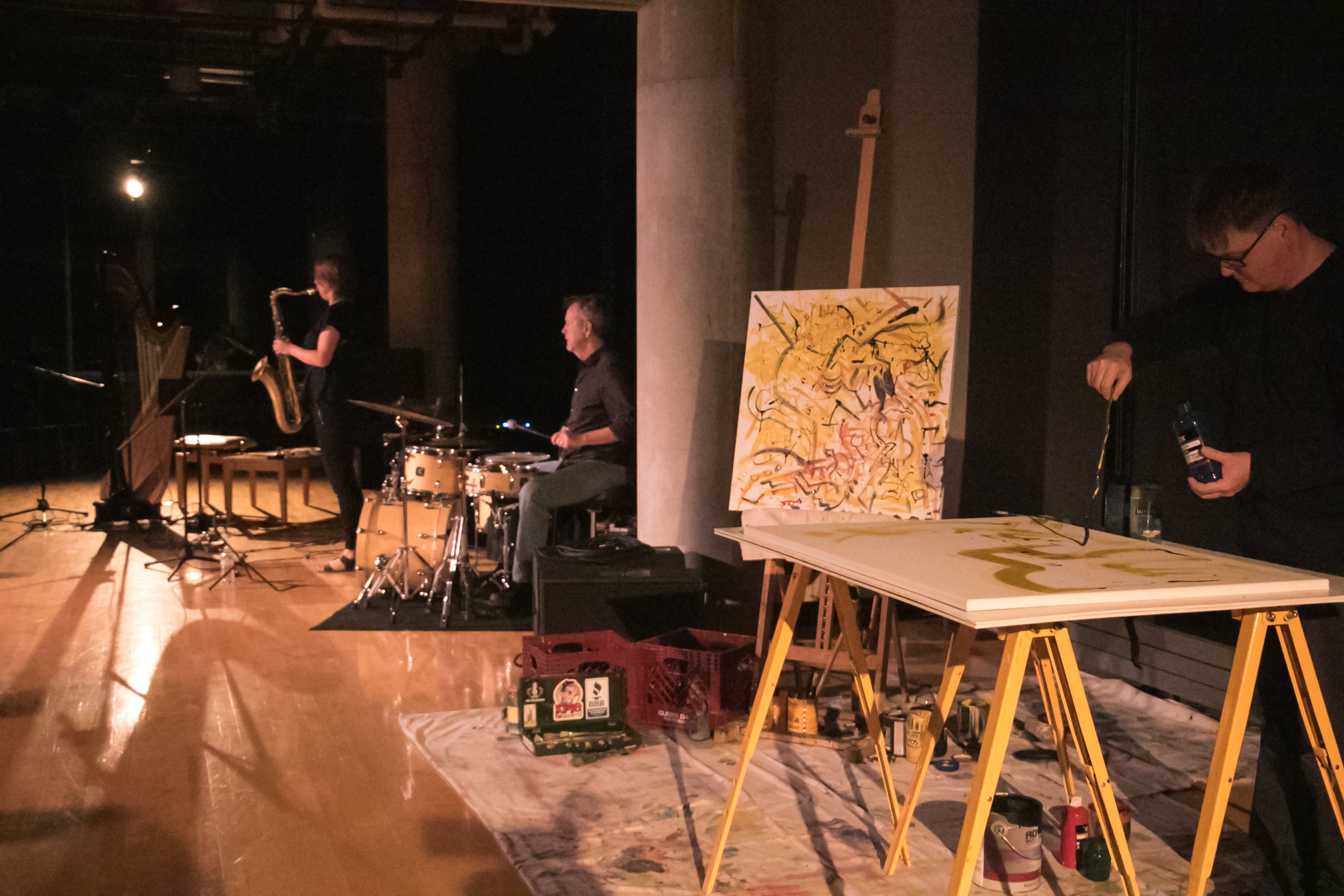 Friday, Sept. 29 and Saturday, Sept. 30 marked an exciting weekend for Lawrence. This past weekend was the second annual ImprovisationaLU, Lawrence University’s Festival of Improvised Art. Last year, this festival was one of my favorite events, so I was extremely glad to see that it was coming back in 2017. The weekend consisted of six shows, a Deep Listening Sound Walk, many workshops and an Open Sound Space at the end of both nights. While I did not have the chance to attend every one of these extraordinary events, I did attend the six concerts and was thoroughly moved by each of them.

It is important to note that the entire weekend was accompanied by a live painter, Lewis Achenbach. Achenbach painted throughout each set, and always presented his finished products to the audience afterwards. Each painting was beautifully unique, and they were presented as a collection at The Draw, an off-campus venue, both nights after the shows.

On Friday night, guitarist Brandon Seabrook played a solo set in the Esch-Hurvis Studio in the Warch Campus Center. He strummed chords quickly and softly, but as soon as the audience seemed to fall into a trance from this repetition, the guitar would suddenly produce sporadic, loud outbursts of static. As Seabrook was playing, his body often shook with vigor, passion and what at times seemed like rage. Each song produced a wall of sound; a moment of rest or pause was rare after the bombardment of music began.

Next, saxophonist Ingrid Laubrock and drummer Tom Rainey took the stage. Seabrook also joined them for a few songs at the end of their set. Laubrock created a sputtering and breathy sound on her saxophone. Rainey began the set by rustling a water bottle; this rustling coupled with Laubrock’s playing created an electrifying atmosphere. As soon as Rainey began playing the drum set, a repetitive groove finally brought the two artists completely together. Often, there was so much happening musically during the performance that your mind and ears were pulled in several different directions. This created an entirely alluring and sensorially fulfilling experience.

The last artist on Friday night was harpist Zeena Parkins. Of the two event-filled nights, Friday’s performances affected me most. Friday was generally the louder, more abrasive night of the two, and was able to grab my attention entirely. While I wish I had space to discuss each of the artists I saw at length, I am only able to briefly touch on the three artists of the second night. These artists were Deep Listening expert Stuart Dempster, pianist and alumnus Matt Blair ’17, and the duo of cellist Tomeka Reid and drummer Jon Mueller.

My favorite part of Saturday night was a Deep Listening exercise conducted by Dempster. The audience formed a large circle, each person placing one hand on their heart and one hand on the back of the person next to them. Dempster instructed us to “sing, chant, intone ‘AH’ on any pitch that will resonate your heart.” This was a powerful and healing moment for many members of the audience. It was a personal and intimate moment to share with a room of friends and strangers alike. For me, this was one of the highlights of the entire weekend; this span of 10 minutes alone stressed the importance of improvised art and its therapeutic abilities. The entire weekend was extremely moving, and I am patiently looking forward to the third annual ImprovisationaLU next year.