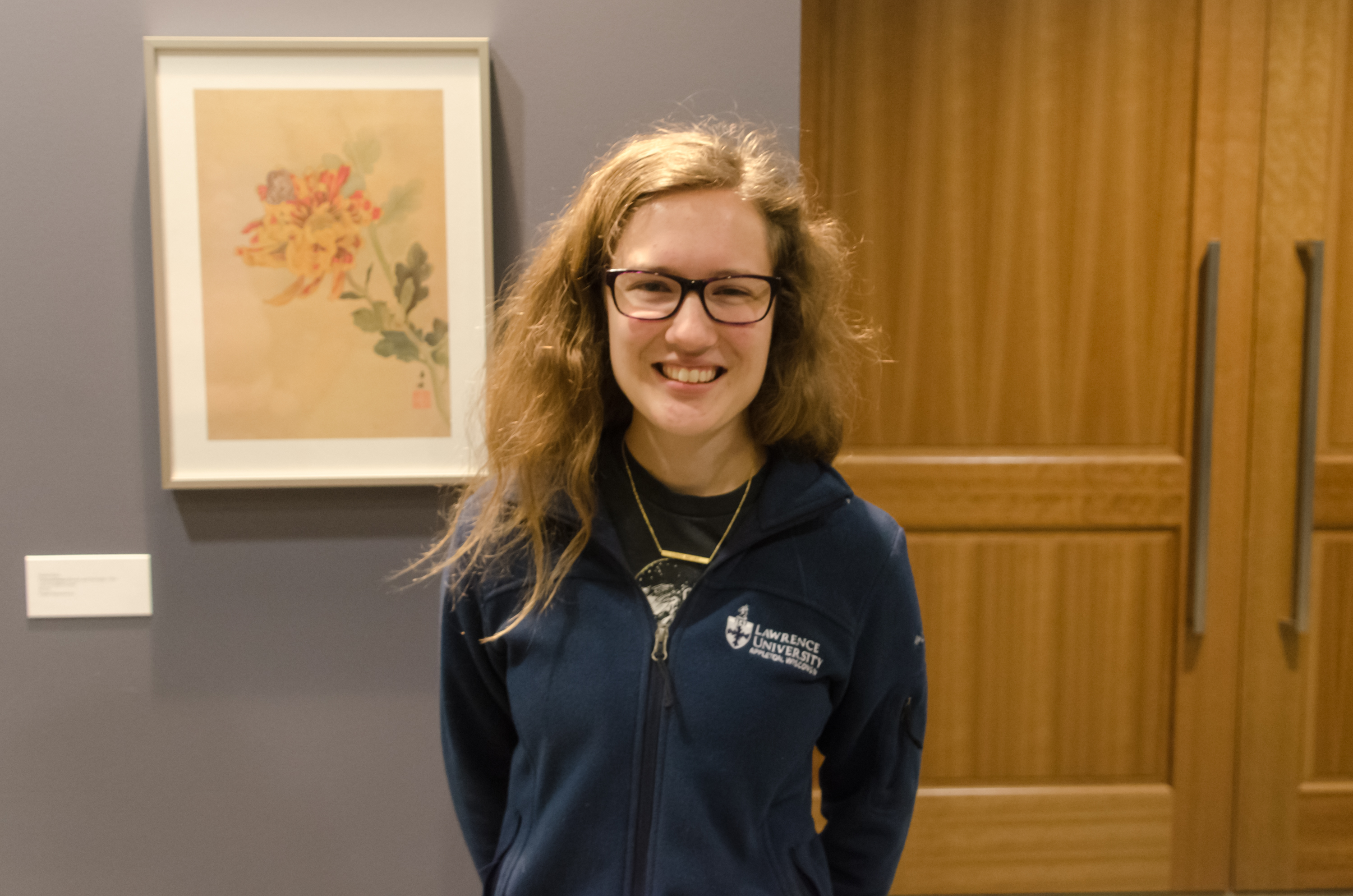 Senior Linguistics Major Ellen Jacobson in the Somerset Room on the third floor of the Warch Campus Center.
Photo by David Baldwin

Students at Lawrence are encouraged to engage in multiple perspectives of learning, hoping to understand that there are many ways to think. In this process, different ways of thinking can converge into a nuanced and inherently interesting conversation. In a similar light, for senior Linguistics major Ellen Jacobson, all the languages of the world represent all the different ways similar ideas are communicated through different means. By understanding this, all these languages have innate value and function together to help tell a greater story.

Jacobson has been confident she has wanted to study languages, and more-so, linguistics, since she was in high school. “I studied Spanish in middle school and French in high school,” she explained, “and I thought it was so cool seeing all the similarities between the two languages and learning about how the languages worked. As native speakers of English, we know how English works, but we don’t necessarily know the rules. So, getting to learn the rules is exciting.”

Jacobson’s interest in language is rooted in understanding the rules, but also stems from her appreciation of how complex every system of language can be. Jacobson stated, “A lot of people think that studying linguistics is about learning proper language use and that I’m going to tell them if they’re using rules wrong or speaking incorrectly. But linguistics is a lot more about describing how language is used in general. There’s no right or wrong for language. If people use it, then it’s inherently grammatical. It’s appreciating language and how versatile language can be.”

Language is a balance of a very human pursuit, yet also structured with an incredibly systematic backbone. This balance intrigues Jacobson. “Linguistics is broad because it combines humanities and social sciences,” she said. “Language is so human, but it’s also mathematical; that’s the thing. You can’t just look at the theory, you have to see how humans use it. But then you also have to understand the basics of how the language actually works, too.”

What has kept Jacobson compelled and excited about language is its ability to tell and retell familiar stories in countless ways. Jacobson elaborated on this as she stated, “I think it’s so cool that we’ve come up with these styles and different ways of communicating the same idea but differently. There is so much variety. In another language, they might have so many different words for love, like in Greek. I think in every language, there are so many different meanings, and each language has its own strong points of what it can express.”

Last spring, Jacobson spent the term in Senegal as part of Lawrence’s off-campus Francophone seminar in Dakar, where she was able to live with a host family and be immersed in the French language. Jacobson most enjoyed her experiences she gained living with a host family. “I loved that immersive context and being able to speak French with them,” she explained. “My French got a whole lot better. And my host family was just so wonderful. They would teach me all words and laugh when I’d get it wrong, which was okay, because it was really fun.”

One of the main things Jacobson found herself interested in during her travels was the language of Wolof spoken throughout Senegal. This interest has inspired her Senior Experience Project she is currently working on. She explained the language of Wolof, stating, “There are many different ethnic groups in Senegal and they all have their own languages, but they all speak Wolof. What I found really interesting is that they have three different clause structures in Wolof. There’s a subject-oriented clause where the emphasis gets put on the subject, there’s an action-oriented one, where the verb is emphasized, and there’s an object-oriented one. And each of these structures have their own pronoun paradigm.”

Jacobson boasts her interest in language is rooted in all the ways different languages communicate the same experiences, but with variance, and how that variance is significant. She carries that same interest as she’s working on her senior project. These three separate clauses might seem purely a grammatical rule, but Jacobson has noticed that these clauses affect the meaning of words in Wolof. This observation has spurred her project overall. She explained this as she stated, “Because of these three clauses, there’s a word that means ‘I’ that’s a separate word from the word that means ‘I’ in the action-oriented clause, that’s separate from the word that means ‘I’ in the object-oriented clause. All three of them mean ‘I’. I want to look at the conversational context that leads speakers to choose between which clause structure they want to use.”

After Lawrence, Jacobson wants to use her studies to serve others. She wishes to work in some place where she could help teach English to those who need it. She explained, “There’s so many refugees coming in all over the world, and I’d like to help them somehow to learn new languages so that they don’t have all the burden upon them to learn English.” Jacobson summed up the inspiration for this goal in one sentence as she stated, “I want to use all of this to help people.”

Senior Linguistics Major Ellen Jacobson in the Somerset Room on the third floor of the Warch Campus Center. Photo by David Baldwin This column intends to find out what it means to be empathetic, to strive for understanding and to document fulfillment in action by having conversations with students working on Senior Experience Projects at…