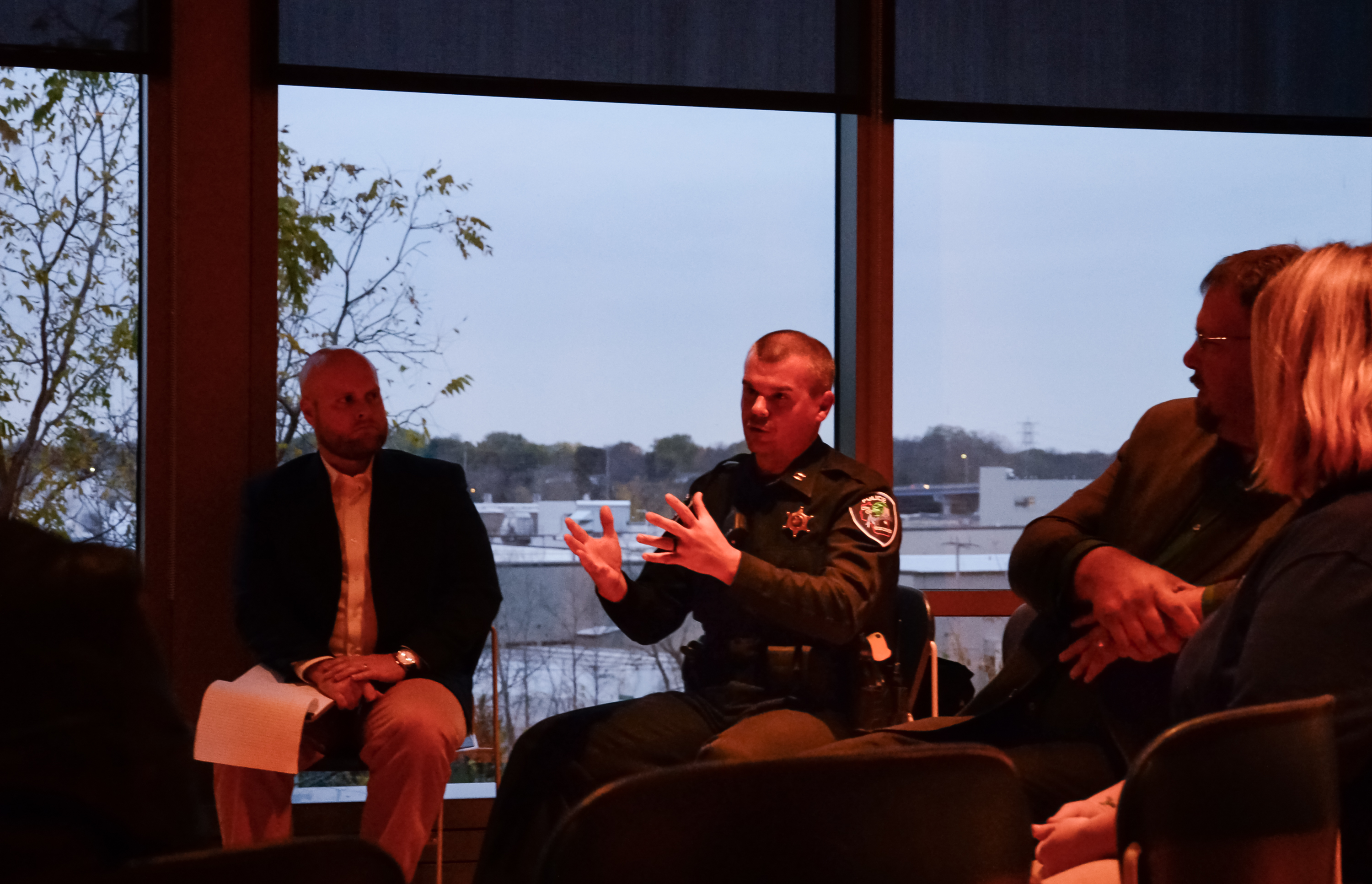 In order to discuss possible measures to increase safety on College Ave., Vice President for Student Life Chris Card hosted a forum in the Esch Hurvis Room last Wednesday, after a drunk-driving incident that resulted in the injury of a student pedestrian. There have been three accidents involving Lawrence pedestrians in this term alone. Many see the intersections around the school as dangerous, especially those on Lawe St., Drew St. and the one by Raymond House, behind the library.

Dean of Students Curt Lauderdale explained the circumstances of the incidents prior to the discussion. The first involved a student riding on her bike from the Chapel toward Main Hall on Lawrence’s special crosswalks. According to Lauderdale, the student rode through the north half of the crosswalk, but did not pause before riding through the south half. The second happened on the intersection of Lawe St. and College Ave., when two students crossing toward Plantz Hall were struck by a car making a left turn. As with the case involving the student on the bike, the injuries were all minor.

The third and by far the worst incident took place when a Lawrence student, also crossing at the Lawe-College intersection, was struck by a drunk driver. She was dragged for 150 feet before the driver finally got out to see if she was okay. When she asked him to call 911, he fled the scene. Luckily, another driver came to her aid, and an ambulance soon transported her to the hospital. The driver who struck the student, Kimberly resident Justin Jorgensen, was arrested later that day.

The frequency of recent incidents on the busy street have led to major concerns for student safety. Many Lawrentians, especially those who spend most of their time in the Conservatory, are required to cross College Ave. multiple times a day to get to class and practice. One of the cases this term involved a DUI, but the other two did not. This would suggest that most pedestrian-related traffic incidents on College are more related to human error or potential flaws in crosswalk design.

“There are critical spots that need attention,” said Card, “and we want to find solutions. We have to remember that road safety is a shared responsibility.” He recounted observations of watching students take the Lawrence crosswalks in front of the Con without looking or absorbed in their cell phones. He also mentioned that he often sees students walking very slowly and casually across the street, instead of with purpose.

One key issue that many of the attendants agreed on was low-visibility. Whether it is due to the concentration of cars blocking some drivers’ view, the steepness of the hill at Raymond, or the level of darkness as the sun sets earlier and earlier in Wisconsin, these aspects can lead even good drivers in the area to make mistakes around pedestrians. Several design-based solutions were suggested by the forum, such as more lighting at the conservatory crosswalks and intersections, changing the blinking lights from yellow to red, more signage, and even more radical solutions such as building an overpass or tunnel.

Assistant to the President and Secretary to the Board of Trustees Jake Woodford, who took notes at the meeting, has plans to discuss design and technical issues with the City of Appleton’s Department of Public Works and the Traffic Division.

Captain Todd Freeman, an officer of the Appleton Police Department, provided the forum with some statistical information on accidents in the area. He said the riskiest time for accidents in Wisconsin is between 3 p.m. and 6 p.m., when people are more eager to get home from work or school. He mentioned that the crosswalks at Drew and Lawe are particularly long, creating a greater area of risk to pedestrians. Freeman suggested that these features be weaved into campus tours, which would help create a culture of caution and vigilance around College. In his view, this change in “culture” is the most important piece to prevent further accidents.

Some expressed concern that the crosswalks in front of the conservatory create more danger than they’re worth. They wondered if the lights the signs give students a false sense of security. In response, Freeman relayed some history about the system, which was implemented in 2012. In order to get the city of Appleton to approve new crosswalks on campus, Lawrence agreed to conduct a study about the effect they created in the environment. The study revealed that the crosswalks actually are working. Drivers pass through the stretch between Drew and Lawe at slower speeds, and there are far less instances of risky jaywalking by students. However, he warned that any time someone crosses a street, they are engaging in risky behavior.

Finally, Card suggested a campaign on campus to promote pedestrian safety and smart behavior while crossing busy streets. There was also effort to acknowledge that the other half of responsibility rests with the drivers, who are sometimes seen to be driving recklessly through College Ave. Freeman said that almost 70% of traffic accidents involving pedestrians featured impaired pedestrians or drivers. Forum attendants speculated that engaging with the responsibility of local drivers may require a separate campaign in the greater Appleton community.

It was clear that the issue of safety on College Ave. and on streets around campus will be an ongoing discussion. “We’re listening,” said Card, “and we’re paying attention.”

Captain Todd Freeman of the Appleton Police Department spoke to forum attendees about car accidents in the Appleton area. Photo by Marieke de Koker In order to discuss possible measures to increase safety on College Ave., Vice President for Student Life Chris Card hosted a forum in the Esch Hurvis Room last Wednesday, after a…