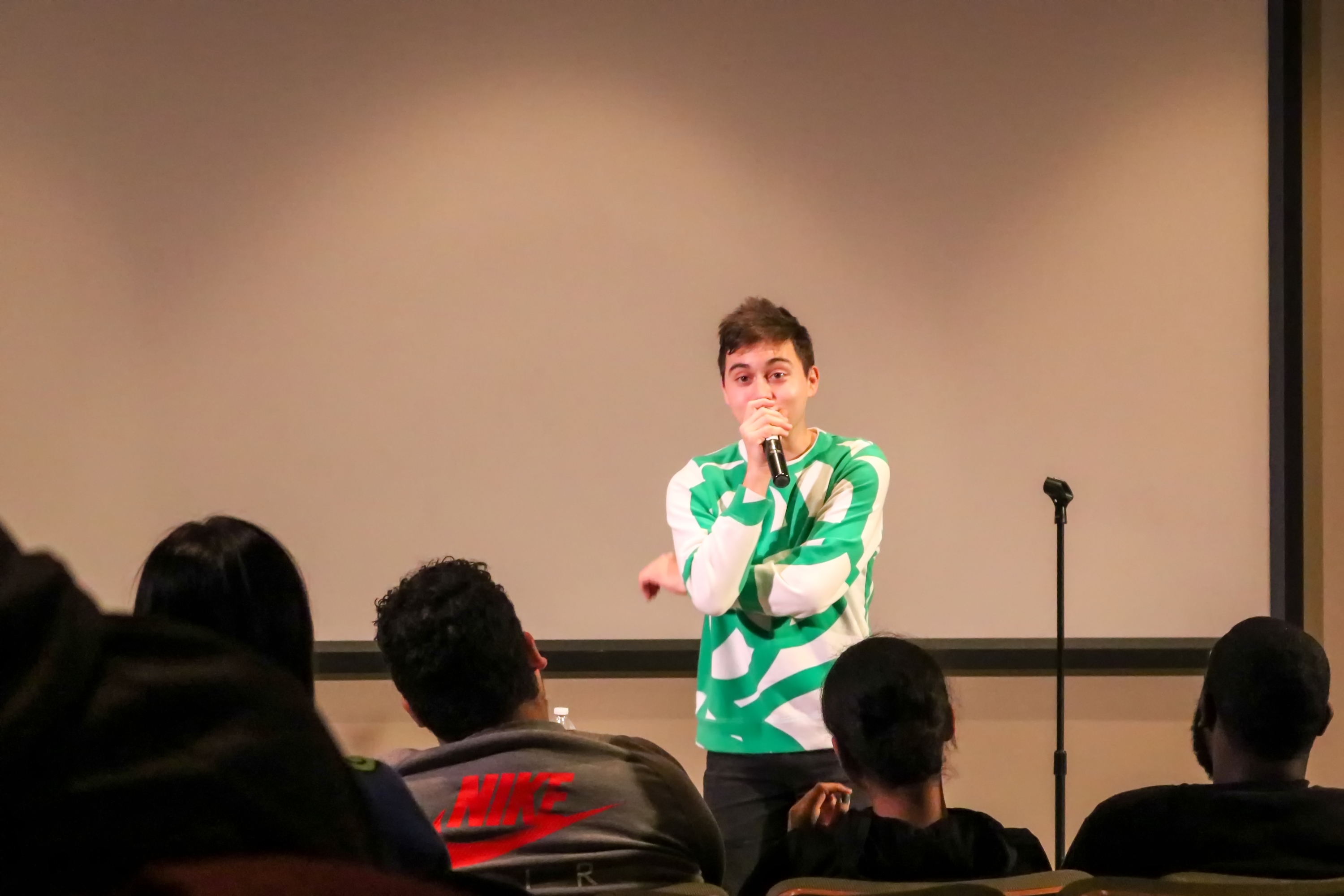 Comedian Brandon Wardell performs to a large crowd at the cinema.
Photo by Nidi Garcia

On Friday, Jan. 5, Lawrence University’s Warch Campus Center cinema experienced a stand-up comedy set by Brandon Wardell. Wardell is a 25-year-old comedian with over 500,000 Twitter followers who has experienced great success in the comedy world since his work on Comedy Central and similar channels. When Lawrence found out that Wardell was performing on our small campus, many students were surprised and excited. The cinema was packed with people, and the audience reception generally seemed positive and agreeable towards Wardell.

This impressive event was put on by the Event Planning and Organization Committee (EPOC). Turnout for the event was large; the cinema was almost completely packed. After a brief introduction by junior Elijah Kuhaupt, president of EPOC, Wardell began his set. Things started off mildly shaky in the first few minutes before Wardell got into his regular material. Since Wardell has a strong following on Twitter, many of his jokes reflected his most popular tweets. Repeatedly, he admitted to the crowd that if they don’t follow him on Twitter, the content may not be as funny. This seemed dismissive of his own performance, which I thought carried on smoothly and cohesively though I was not previously familiar with his Twitter page.

Throughout the performance, many of Wardell’s jokes skated a fine line in which they nearly turned controversial or uncouth. Jokes discussing dating, drugs and millennial humor accounted for most of the set. As the set went on, the crowd got louder and most supportive of the performance, with the exception of a few jokes that did not sit well with the audience. The stand-up set was scattered with unconnected and random jokes, yet the awkward and choppy delivery of the material was often funny in and of itself.

A particular favorite of mine was a joke poking at fragile masculinity and the strange interactions of men between one another. Ironically, Wardell yelled out that the next joke was for the “fellas” in the audience, asking if there were “any kings in the building.” He proceeded to make a joke about a guy talking to his male friend about his girlfriend and his truck; the thick sarcasm was unabashedly charming and likeable. The irony and mockery present in this middle part of the performance was particularly funny.

After the stand-up set, Brandon Wardell performed an aux-cord DJ set during a party at the WLFM House on campus. This event generated the largest attendance of any gathering at the house so far during the course of this year. It seemed that the majority of Lawrence University was impressed by the presence of this sought-after comedian.

Comedian Brandon Wardell performs to a large crowd at the cinema. Photo by Nidi Garcia On Friday, Jan. 5, Lawrence University’s Warch Campus Center cinema experienced a stand-up comedy set by Brandon Wardell. Wardell is a 25-year-old comedian with over 500,000 Twitter followers who has experienced great success in the comedy world since his work…