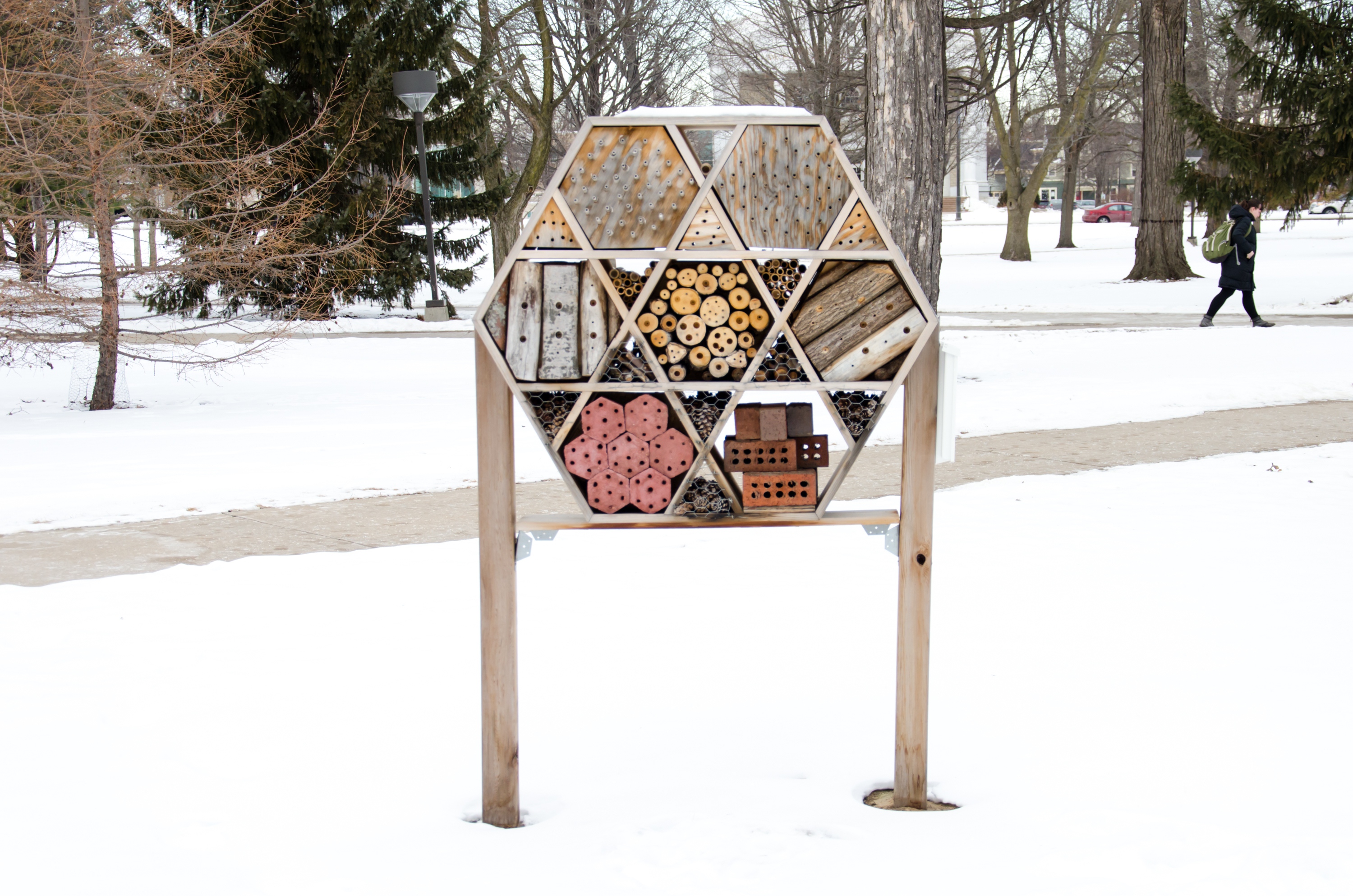 The Appleton Pollinator Project has constructed and placed several artificial bee hives around the city of Appleton.
Photo by Marieke de Koker

Offering an opportunity to contribute to Lawrence research, Assistant Professor of Biology Israel Del Toro gave a presentation called “Urban Gardens with B.Y.O. Beez” in the Warch Campus Center Cinema last Wednesday. The audience was comprised of members of the Appleton community, including families, seniors and school teachers. Del Toro petitioned the Appletonians to participate in a city-wide experiment about local bee populations.

To start off, Del Toro led a discussion about biodiversity, asking “why do we care?” The participants gave several different reasons including sustainability, protecting food chains and “because it’s pretty.” He argued that biodiversity is an especially interesting topic when it comes to insects. For example, he said that if one were to line up every animal species in the world side by side, every fourth one would be a kind of beetle.

Del Toro presented one strategy for thinking about environmental goods like biodiversity: by putting them in the framework of “ecosystem services,” or what species do for us. Some species, like bees and other pollinators, may help to enrich the environment. Others may be a source of economic gain. Some have a cultural resonance in a community, like the American buffalo, and still others may help to regulate the populations of other species, like owls. When we think about species in terms of their services, not only does it help us to identify their role in an ecosystem, it helps us articulate why they are worth protecting.

Over the last twenty years or so, global bee populations have been in a steady decline. This has included the disappearance of wild bee populations and the deterioration of domestic honeybee hives. Experts have identified several causes for this strange trend, including bee-killing pesticides, industrial agriculture, parasites and climate change. These factors present obstacles to all pollinators, not just bees.

Del Toro’s focus is the biodiversity of urban ecosystems. In his research, Del Toro plans to figure out the “value” of bees in our local gardens. “In other words,” said Del Toro, “If I offered to buy all of the bees in your backyard, what would you sell them to me for?”

Del Toro and his “B” Team have been conducting research about local bee populations since the spring of last year. Many students have probably seen strange octagonal structures dotted all over the campus. These were constructed by Del Toro’s team as homes for bees. They also collected data about the different kinds of bee species in the area. Although we think of bees as simply honeybees or bumblebees, there are actually over 4000 unique species in the United States. In Wisconsin, there are over 400 varieties. By capturing bees over a period of eight months, the B Team recorded 78 different bee species in the Appleton area alone.

For the next phase of his research, Del Toro plans to recruit “citizen scientists” to amass more data. Community volunteers will receive a small raised bed to be installed by Lawrence students in their backyards. Different kinds of plants will be placed within the bed, with one side open to pollinators like bees, and the other covered by a mesh. Using the square foot gardening method, these scientists will record not only the variety of bee species in their backyards, but also the difference in growth between pollinated and un-pollinated plants.

The research that Del Toro and his team are pursuing is unprecedented. “We’ll be able to find out things like if one bee species is really good at pollinating tomatoes and another one is really good at pollinating watermelon,” said Del Toro. “These are things we just don’t know yet.” It was clear from the presentation that the petition for Appleton “citizen scientists” was both a tool to help protect future bee generations and a way to bring Lawrentians and Appletonians closer together.