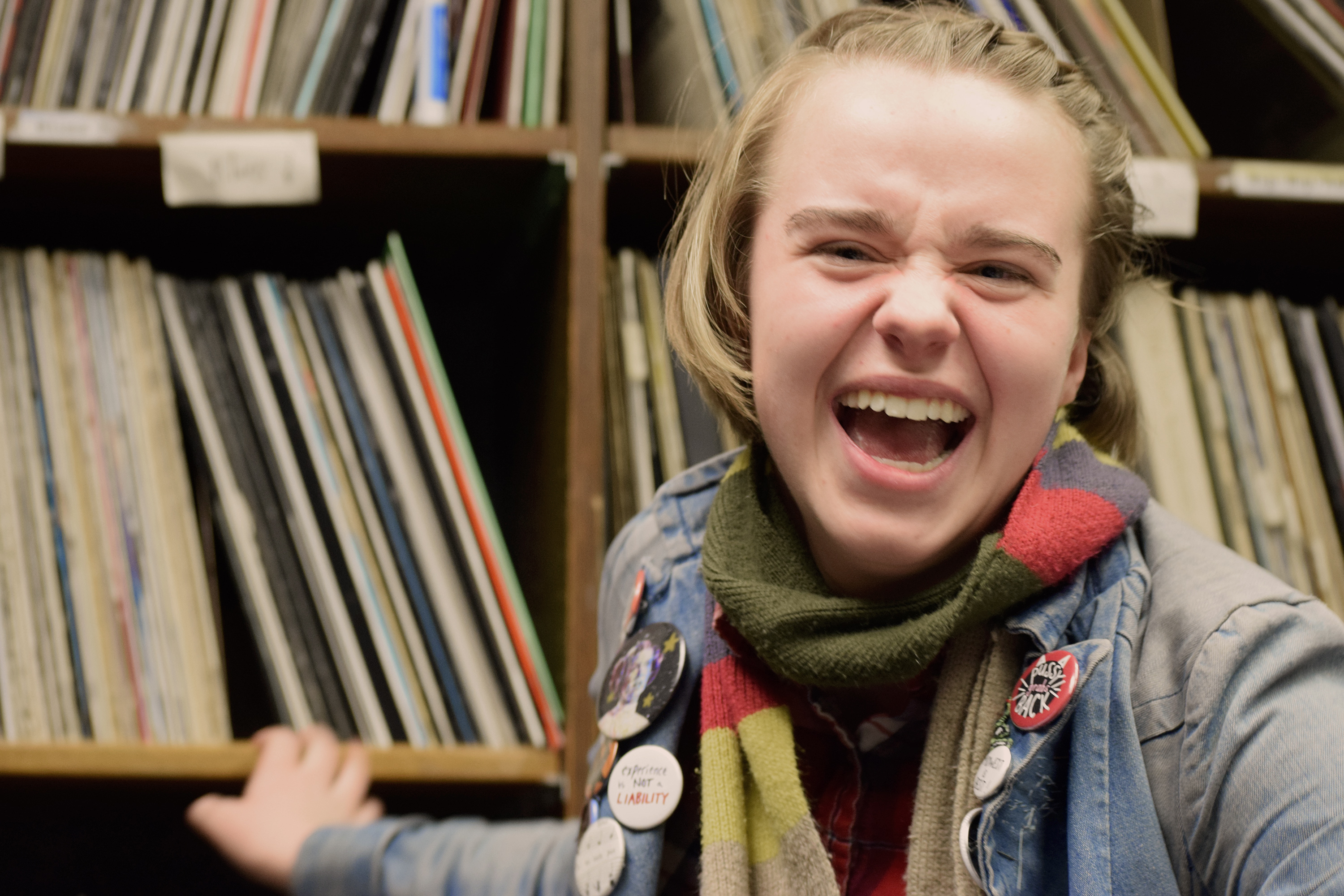 Mary Grace Wagner wearing some of her curated buttons and pins.
Photo by Sara Nocton.

I have wildly cared about clothing my whole life. From spending hours of my childhood afternoons putting together outfits, to ceaselessly chopping up skirts and dresses to make my own creations, I spent a lot of my childhood thinking about clothing. My identity has largely, and unknowingly, been represented through clothes. Through this column, I hope to showcase my fellow Lawrentians’ understandings of clothing, dissecting the nuts and bolts of what personal style is and seeking out stories about how identity informs style and vice versa. Style is about so much more than just clothes. It is one of the most visual ways we present our own identities.

Freshman Mary Grace Wagner’s style is seen throughout everything she curates in her life. Her room is carefully yet maximally decorated in meaningful memorabilia and decor. Hanging under her lofted bed is a bra she hand-sewed to say “The Nipple of Knowledge,” a memento she completed during her first Great Midwest Trivia experience here at Lawrence. A stack of records sits on her floor, on the top is Madonna’s “Crazy for You” 45 RPM record.

“Growing up, my room used to be a mess,” Wagner stated, “But one day I just figured, if I clean things up once a day, then it’s always going to be neat.” Mirroring this philosophy, Wagner’s own personal style has become a streamlined curation of meaningful clothing, a curation always open to the wacky and to the memorable.

Wagner’s curation of clothing begins with a specific color palette. Wagner stated, “I liked bright greens and oranges when I was younger, but as I got older I realized all I was wearing was a lot [of] navy blue, black, brown, army green and grey. And that hasn’t really stopped.”

Wagner doesn’t seem to be afraid of embracing this color-scheme. “I really don’t care that I don’t stick to the fashion rule of not wearing black and brown and grey together because I think they look great together! I noticed how that has happened and just wanted to stick with it because I know it works,” Wagner stated.

When asked to describe her style, and how she thinks her style is perceived, Wagner couldn’t help but laugh. “I always say I have two looks: North-Woods Preppy or Homeless Lesbian. There’s barely any in-between.” Wagner is drawn towards masculine styles in feminine cuts. For her, the balance between the two feelings isn’t just a preference, but a form of expressing her identity.

“With this whole intersection, my fashion journey right now is trying to find masculine clothes that fit me. Because I’m kind of small so it’s hard to find things that always fit,” Wagner added. Wagner’s experience with sewing has helped her to navigate through this. Wagner stated, “I’m working in the costume shop here so I have clothes on my own agenda that I’d like to size to myself.”

Wagner has actually been involved with costume work since high school. However, in high school, her involvement in the costume department got a little carried away.

“I used to steal clothes from my costume department,” Wagner admitted. “It all accumulated at the drama banquet senior year, when my costume director unfurled a 20 foot long receipt that she had made that was an alphabetical list of any type of clothing item you could think of with a price next to it. And at the top and bottom it said, ‘Mary Grace Wagner has stolen all of these things from the costume department, and we’d like for her to pay them back, give them back, or whenever someone compliments her on them, she has to tell them where they came from.’”

One of these extra-thrifty finds Wagner has is a simple navy blue shift dress with a white paisley-esque pattern. Wagner explained that, “You always need a good shift dress, they’re so functional and I can wear them all year long! I can wear this feminine-cut dress with a flannel shirt and some worn-in boots. But I can also just wear it on its own, so of course I had to have it!”

Another one of Wagner’s favorite pieces in her wardrobe is a denim Marc Jacobs jacket. “I found it at a vintage store for twenty bucks. It’s a pretty feminine cut too, so I usually wear it with plain black leggings and black shoes.” Wagner has adorned the lapels of the jacket in her own buttons.

“It’s like another way to express myself,” Wagner said. The buttons featured favorite shows, quotes and even a quote from the NRA Representative Wayne LaPierre. The button reads, “We believe in absolute gun-free, zero tolerance, totally safe schools. That means no guns in America’s schools, period.”

Wagner draws a lot of her style inspiration from her family. Whether that means having recently gone through her grandma’s wardrobe, or being given hand-me-downs from her mother’s four sisters, or even online shopping with her father to buy matching shirts.

However, this familial connection to clothing hasn’t hindered her own personal expression through style. Wagner said that, “In first grade I realized I didn’t have to dress how my mom dressed me. For all of first grade I was wearing dresses and patterned cotton tights in stripes and patterns with Mary Janes. There was a point where I asked if I had to wear a dress every day and she was like, ‘No, no you don’t, of course not!’ and I just thought I had to wear that every day.”

Mary Grace Wagner’s style is curated, functional and most of all, fun. “I’ve never cared about what I wore. That’s something I’ve always had about me, I’ve never cared,” Wagner asserted. Her joy for clothing is an extension of the joy she feels for her family, her interests and for herself. Wagner added, “It’s all fun. If my outfit’s too much, well okay. It should be fun. My closet should make me happy and I want to look in the mirror and say, ‘This looks fun, and I feel like myself.’”

Mary Grace Wagner wearing some of her curated buttons and pins. Photo by Sara Nocton. I have wildly cared about clothing my whole life. From spending hours of my childhood afternoons putting together outfits, to ceaselessly chopping up skirts and dresses to make my own creations, I spent a lot of my childhood thinking about…