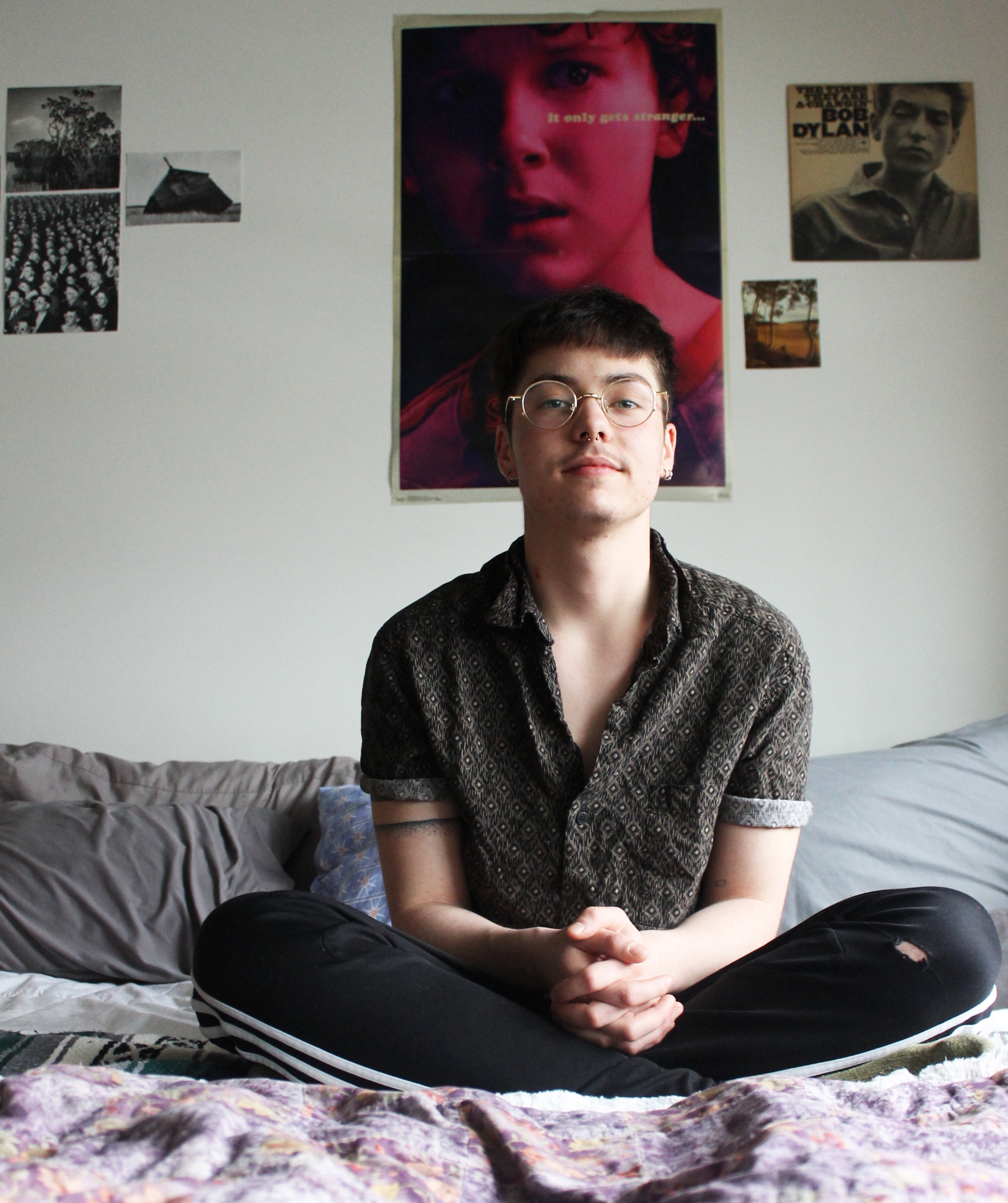 Junior Chandra Jakle keeps his space, much like his style, clean and put-together. Bob Dylan’s 1964 “The Times They Are A-Changin’” album hangs next to a giant, magenta-tinted poster of Eleven from the show “Stranger Things.” The saturated and bright poster of Eleven stood out as the focal point amongst the muted colors that marked Jakle’s space. From sitting in his room it was clear that his style strives to be purposefully understated, but carefully hand-picked.

Jakle was quick to say that he didn’t really see himself as having that much of a stand-out style. To Jakle, his deeper investment in clothing has been a recent development. He initially attributed this new investment to his studying abroad in Berlin.

He explained this shift as he stated, “The way I dressed started to change because in Berlin we were supposed to blend in. We literally flew out to the study abroad program as their fashion week was ending, which was overwhelming. Fortunately, it turned out the European style that was in fashion while I was there really matched what I already liked.”

The part of this European style that Jakle identified with the most was a sense of minimalism and functionality through clothes. Jakle explained that, “I like a lot of basic pieces. I don’t like graphic t shirts. I have a lot of white and black t-shirts and I’ll wear a plain button-up in a solid color. I do like printed shirts sometimes, like the one I’m wearing now. But even this shirt still isn’t overwhelming and doesn’t feel too done-up.”

As a trans man, finding clothing that fits what Jakle likes, as well as his body, can be challenging. Jakle pulled out a deer-printed button-up to provide an example of this situation. Jakle had altered this button-up by shortening the sleeves and altering the lapels of the shirt so that it would have a mandarin collar.

Jakle explained why he liked his alterations to the shirt. “Being trans has a lot to do with my style because I didn’t know how to dress, especially when I wasn’t comfortable with my body. I love this shirt because it’s so Midwestern trashy and it’s a good reflection of how I grew up; it just didn’t fit me right. Since I have the freedom to make alterations to my clothes, I have autonomy and control over how I look. It’s a good translation of how I feel on the inside.”

The memories Jakle has associated with clothing and fashion are largely shaped by his identity as a trans man growing up in lower income. Jakle stated, “Style and aesthetic have been weird because it’s always assumed that you have to have money to acquire a pleasing aesthetic. Being lower income meant I didn’t have the privilege to care about how I looked, or even to worry about what it means to care about that.”

Jakle went on to explain that growing up he felt a lot of frustration towards the clothes he’d been given to wear. None of the clothing his mother would give him was what he envisioned for himself. After coming out, Jakle said things started to change.

Jakle said, “The interesting thing is that now that I’ve come out of the closet as trans and she sees me as her son, she’s 100 percent better at buying me clothes. All of the nice things I own are from her as gifts. It’s like something just clicked. My mom and I have an interesting relationship, but I think one of our medians is clothes. People have their languages in different ways. Mine is just clothes.”

Not only is Jakle interested in the clothes he changes in and out of every day, but he is also invested in the more permanent aspects of style. Specifically, through tattoos. Jakle has multiple tattoos.

One of the larger tattoos on his forearm is a handful of cornflowers, the national flower of Germany. Jakle explained that, “I designed it in Berlin because I wanted a tattoo to take back with me. I like tangible souvenirs, but I felt a better gift to myself was to take a part of Berlin with me that I can never take off. There’s a permanency that I always want to have with Berlin. My tattoo is black and white, but the cornflower is really beautiful in person because it has this deep blue in the petal.”

Overall, while Jakle’s outfits still have color to them, it’s much more about how those colors play off of each other. Much like his blank ink tattoos that tell colorful stories, Jakle’s style is all about layers.

Jakle stated, “I like the juxtaposition between who I am and who I look like. I’m directing how I present in these spaces and I like being a surprise for people because that means I’m breaking their expectations and that means they can get to know me more.”

All in all, Jakle’s functional and put-together style is streamlined as a constant way for him to explore his own evolution. Jakle stated, “Every day it’s different because I don’t know who I’ll be. That’s not to say I’m a completely different person, but my style adjusts a little every day. In this way, I allow myself to grow much faster than I would’ve before. I’ve changed a great deal in just the past year.”