Classics as a process of healing for veterans 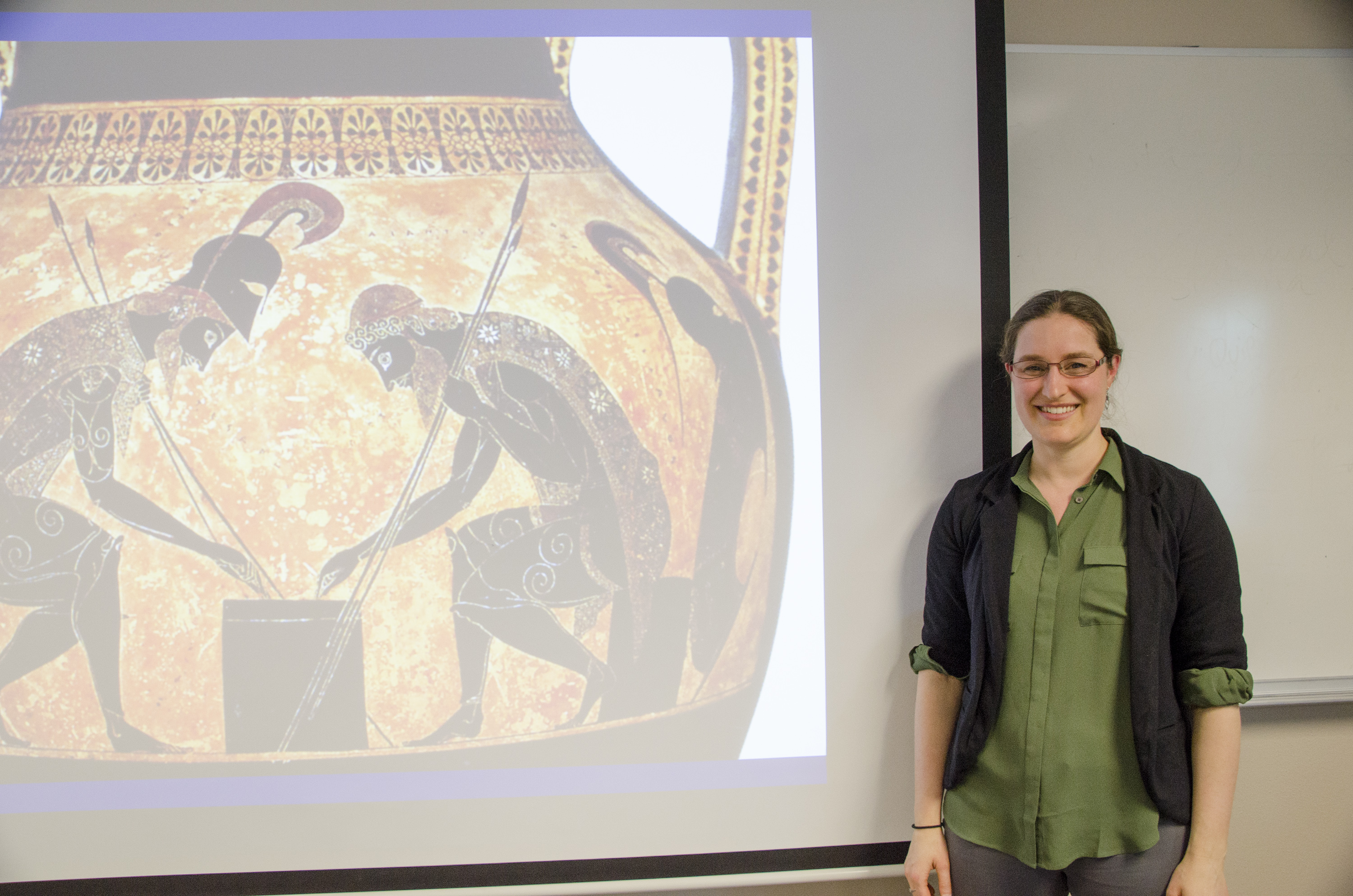 Classics Week concluded on Monday, April 23, with a lecture on the use of classical literature, namely the works of Homer and Sophocles, in treating veterans with post-traumatic stress disorder and other issues related to returning home from war. The lecture, which was originally scheduled for the beginning of Classics Week but had to be moved because of Blizzard Evelyn, was given by Assistant Professor of Classics Adriana Brook in Main Hall.

During the lecture, Brook used several characters form the works of Homer and Sophocles as examples of how their works could still relate to modern warfare and the experiences of those who fight and introduced the audience to two programs that use classic works to provide therapy for returning veterans.

Among the characters involved were Achilles, Philoctetes, Odysseus and Ajax. Each of these characters was introduced and part of their story was told, though usually not the sections one might expect. Brook said that the importance of the classical works isn’t just in the scenes of combat that most usually think of when they think of war stories.

“The periphery of war is just as important,” she said, pointing to several examples including scenes of characters playing checkers or bandaging the wounds of friends. She also says that this is part of the reason ancient texts can still be applied today.

“They’re not about the battlefield technology or the battlefield experience, they’re about these quiet moments off the battlefield of feeling vulnerable or lonely or betrayed or isolated or depressed, and that hasn’t changed over time. The sort of emotional experience that the heroes of these stories go through. The psychological trauma that they experience being at war that’s the same trauma that I think is inflicted on anybody that experiences war.”

According to Brook, the character with the most parallels to modern soldiers is Ajax, because his story encompasses so much of the experience of veterans today.

Following the introduction to Greek literature and her demonstration of the connection to modern warriors, Professor Brook introduced the audience to two different programs that have had success using these works to provide therapy for veterans.

One of those programs, called Theater of War, is a theater company that travels around the U.S. and Europe conducting readings of Sophocles’ “Ajax” and “Philoctetes.” The group emphasizes destigmatizing psychological wounds caused by war and strives to promote understanding of mental health issues by presenting to both civilian and military audiences.

The other organization is a veterans’ reading group, started as a class at Dartmouth College. The program, which is now also offered at the University of Vermont and other universities across the country, is a course open only to veterans that uses Homer’s “Iliad” and “Odyssey” to draw connections between the experiences of the characters and the experiences of the students.

The two programs, share the common thread of trying to end what has been called an epidemic of veterans’ suicides and mental health issues following their return from wars in Iraq and Afghanistan, as well as older conflicts like Vietnam and Korea.

According to the latest data from the Veterans Administration, twenty veterans commit suicide every day in the United States. This is down slightly from the record high of 21 in 2010. Programs like this, according to testimonials from Theater of War and the Dartmouth program, can be successful in helping veterans in their readjustment to society.

For that success, the founder of the Dartmouth program was awarded the Society for Classical Studies Outreach Prize in 2017. Theater of War has also applied similar techniques of working with classical literature to other societal issues such as gun violence, drug addiction and the community divides seen in Ferguson, Missouri in 2014.

Despite the success of these programs, Brook admits there are certainly some issues with the classics and that other kinds of works can be useful as well.

“It’s not only Classics that have been used for this purpose,” she said. She points to the use of Shakespeare in prisons and other institutional settings to help veterans as an example of this. Brook also says that classic works may not connect with a lot of veterans simply because of changes in the demographics of war, such as women taking on combat roles.

“One thing that’s a challenge for me in teaching the Classics is that there are no women warriors in these stories, so we’re only talking about a very particular male archetype. There are amazing female characters in Greek tragedy, but they don’t speak to the soldier’s experience in quite the same ways. I think that’s something that needs to be kept in mind here—that for a particular kind of veteran, these stories may not resonate so strongly,” she said. “That’s an important difference between past and present.”