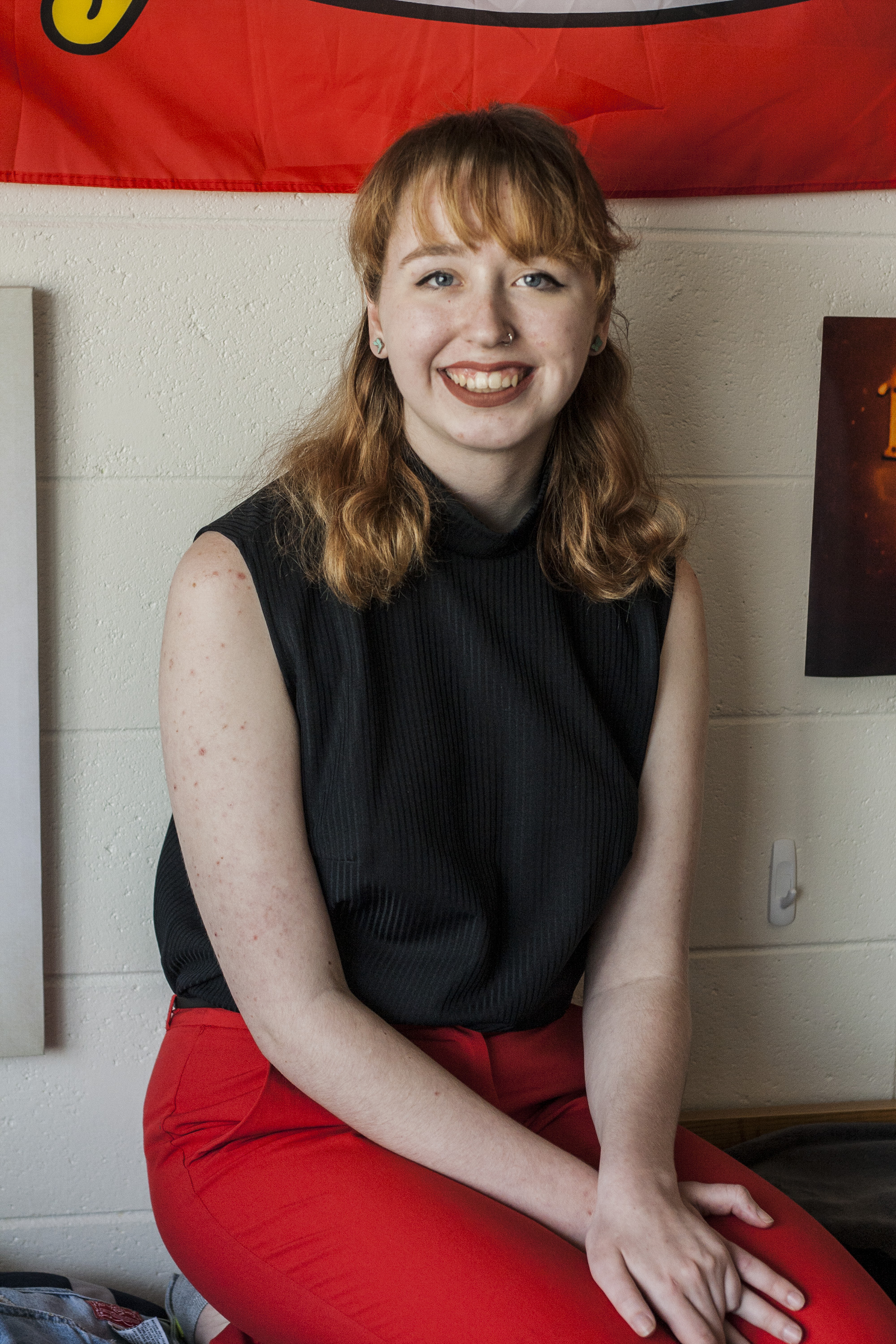 Scattered throughout freshman Izzy Abbott-Dethrow’s dorm room in Trever are references to her love of British culture. Her laptop is covered in the Union Jack, the wall over her bed decked in the Essex flag. If there’s one thing Abbott-Dethrow loves, it’s her roots to Great Britain. And that’s more than represented in the clothes she wears.

Abbott-Dethrow’s mother is British-American and her father is a fanatic for all things ‘60s and British-oriented. Growing up in this environment, Abbott-Dethrow was unknowingly influenced to fall in love with the same things her father was passionate about. Abbott-Dethrow stated, “My dad was very obsessed with The Beach Boys, The Beatles and The Rolling Stones. That was all his thing when I was growing up. I’m sure that subconsciously affected what I’m drawn to.”

Not only did this influence Abbott-Dethrow’s taste in music, but it transferred over to what she looks for in clothes. Abbott-Dethrow is in love with the mod style of the 1960s. Mod started as a youth subculture that emerged in the early 1960s with its roots in London.

The subculture celebrated what they saw as sophisticated music, which mainly became modern jazz and R&B. This meant listening to artists like Miles Davis or Muddy Waters. Mods were often the focus of moral examination due to their known riots with other London-based subcultures.

Their moral qualms became less significant to the public as their standout style and music began to influence pop culture. Suddenly many people were donning the mod look.

Men wore tailored slim suits, women embraced a more androgynous style by cutting their hair short and miniskirts became all the rage. Popular British bands like The Rolling Stones, The Kinks and The Who all had mod fanbases. While that little-known band The Beatles adopted a mod look for some time too, their rock music didn’t fit well into the R&B roots that the mods celebrated.

This mod style has continued to influence culture today in both music and fashion, and Abbott-Dethrow is here to reap those influences. Abbott-Dethrow loves it all; from her praise of the shift dress to her passion for frontman of Small Faces and Humble Pie Steve Marriott’s ruffled paisley shirts. Abbott-Dethrow stated, “There is so much that is still inspiring today about the ‘60s. I mean, you can’t go wrong with a shift dress. Honestly, it’s perfect. And once I figured out that I could dress this way, it was like, this is it! This is what I need.”

This development in mod style for Abbott-Dethrow has been a recent personal discovery that began as she started college. She grew up going to a K-12 school with uniforms that she’d have to wear every day.

The clothes she did wear outside of school were mainly purchased from Forever 21 and H&M. Abbott-Dethrow stated, “I mostly did fast shopping when I had the time to in high school. And I’d end up with most of my things being floral-patterned dresses that barely fit me because I’m 5 foot 11 inches. I wasn’t really satisfied with what I was wearing because things didn’t fit me or my actual style.”

This expansion of Abbott-Dethrow has given her the strength to walk through other truths about herself. To this, Abbott-Dethrow said, “I was always looking for validation in what I wore, but then I started college and I figured I didn’t need that anymore. And I think that all led to me feeling okay to come out as bisexual. I didn’t feel comfortable enough to come out until I was deep into this mod phase. This clothing is what makes me feel like myself, so that’s how I knew it was a good time.”

Abbott-Dethrow’s love for music doesn’t stop at the ‘60s. In fact, she often feels she dresses to match the mood of the song that’s in her head. Abbott-Dethrow stated, “Whenever I have certain songs stuck in my head, I like to dress to match those songs. If I have a song by Riot Grrrl stuck in my head, then I can’t wear my Pattie Boyd outfit, I might wear my thrifted denim overalls instead. And if I have a song by The Beatles in my head, I’ll have to wear something more ‘60s.”

When Abbott-Dethrow isn’t musing about mod style on her own or her music obsessions on her radio show, she also loves to crochet. Abbott-Dethrow hand crochets colorful hoop earrings and even crop tops, bralettes and halter tops.

At the foot of her bed is a rug she latch-hooked with the design of a colorful row of cats looking out the window. She’s interested in selling these hoop earrings and tops too, if you’re in need of some colorful apparel. Her love of crocheting started young. She explained that, “My grandma taught me how to knit and I started when I was seven, but I didn’t take up crocheting until I was a junior. I definitely grew into it. My grandma also started knitting when she was seven, but she didn’t learn to crochet until she was in her thirties. So it’s a cool pattern. One of the craziest things I knitted was a Bob’s Burgers sweater for a friend.”

Even though Abbott-Dethrow has found herself at home in the styles of the ‘60s, she still sees her looks changing every day. Abbott-Dethrow stated, “Even if I’m wearing something more ‘90s, I’ll still have a mod staple like a turtleneck on underneath. That doesn’t even mean I’m committed to anything, though. I mean, I’m even dying my hair blonde on Friday, so maybe I can’t commit to anything. But with clothes, I don’t really think you should have to.”