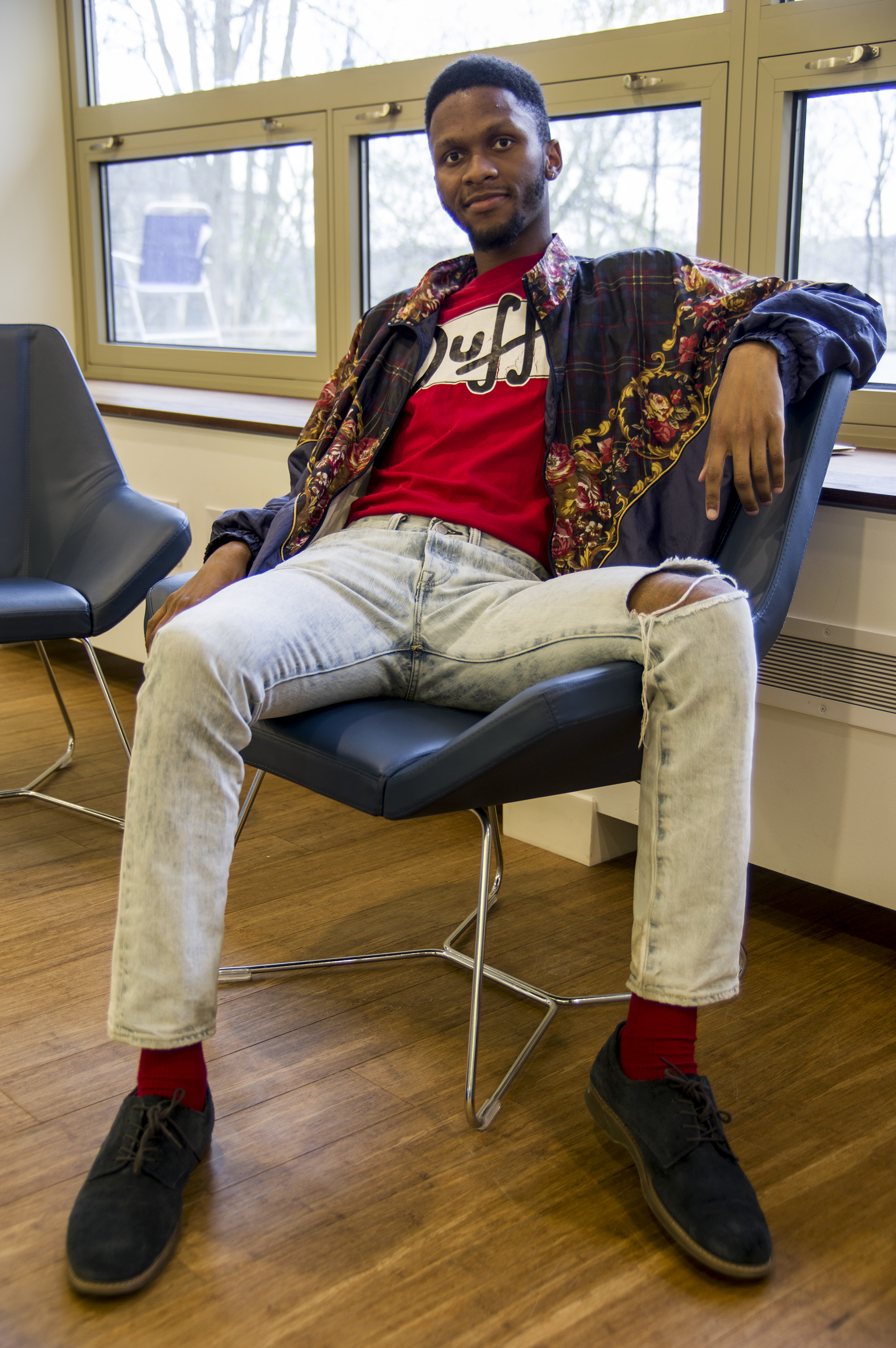 While walking to Seth’s Coffee with senior Jamil Fuller, he must have said hello to every other person he saw along the way. He had kind words and humor to share with everyone he knew. This warmth and openness doesn’t just start and end with his personality but has infected everything from his style to how he approaches music.

“I draw a lot of energy from other people,” Fuller stated as he walked across College Avenue towards Seth’s. “I mean, I really love when people compliment me on things. It shows that people care about this thing I’m putting work into, which is gratifying. And even when I’m making music, if something I’m performing starts out really personal, once it’s out in the open, it’s more about how I want other people to feel when they’re interacting with it. Clothes though is interesting because it’s all for me, I only get dressed up for me.”

Fuller fills his life with the creative and collaborative process, especially through his music. He’s currently performing in the band Jamil & The Litterbox Kids, and he’s dabbled in a few other collaborative projects around campus throughout the year. In every project, Fuller takes great pride in making music in the moment.

Fuller stated, “I feel there’s definitely an appeal to creating music in a more private and personal setting, but I try to put myself out there and to create music in a more improvisational way, which is a big part of my upbringing. My family is Christian and my aunt leads the church choir so I’m used to that environment. I’m used to seeing people take solos that sound different every time. I try to bring that to different types of music that I perform.”

While Fuller’s music is more inherently collaborative, his clothes always remain more personal. Fuller explained, “At least with clothes, it’s presented to other people, but in its creation, it’s a very personal thing I do on my own time. It’s pre-composed. I’m daring with both clothes and music, but with music it’s different, because I’m doing live improvisation. I’m not sure what it’ll turn into in the exact moment till it’s come out of my mouth.”

Friends and collaboration have a huge impact on Fuller’s creative process and his clothes. Fuller stated, “I have this friend, Stella. We’ve been friends since fifth grade, best friends since sixth grade. All her friends know me as her brother. She definitely helped me grow a lot in terms of encouraging me to express myself the way that I feel and the way that properly represents me that isn’t just what everyone else is doing. And now I feel like I’ve grown a lot through that especially. Now she is styling people in music videos in Italy where she goes to school.”

This process of self-expression for Fuller has only evolved more as he’s studied at Lawrence. Fuller spoke to this as he stated, “I think I have been riskier over the past two or three years. I’m less confined to a gender binary, and I really believe clothing has no gender. You can wear whatever you want. That might mean one day I’m wearing a black knit dress with speckled white over it that I wear as a long shirt. Or that might mean I’m wearing a long 80s women’s jacket that I got from the thrift store.”

When it comes to Fuller’s actual wardrobe, it’s all about versatility and how every piece functions with each other. Fuller stated, “I love when I have had certain items of clothing for a very long time, and then one day I realize, ‘Oh my god, I didn’t realize this piece could go with this piece!’ I think a part of why I’ve realized those sorts of things is because of just how much my sense of fashion and the way that I express myself has changed over time.”

From coats to earrings to an extensive collection of sunglasses, Fuller is drawn to all sorts of interesting pieces. Fuller got into the details of his wardrobe as he stated, “I normally like flashy pieces, but I’m also drawn to pieces that are just innovative or seem different in some way. For example, this sweater I’m wearing. Sweaters are a pretty basic piece, but this sweater has all these little specks of color so I like looking at how all the colors don’t necessarily go together, but somehow that displacement works. And then the other things you wear around it can bring out the colors already in it.”

Fuller’s noticed a difference between how style is displayed between Appleton and his home in Washington Heights, New York. He said, “We don’t really have many malls in New York, but sometimes my friends and I would go to the Palisades Mall in New Jersey, and I always liked looking at how people dress there because they’d dress up. So I thought here in Appleton it would be the same, that the mall would be this prime representation of style, but it’s not, really. It’s a different mentality of what the mall is for. Which isn’t necessarily bad, it’s just different.”

All in all, Fuller finds himself creating a balance between who he actually is and how he wants to present that idea of himself through his clothing. “I think that any time I’m presenting myself, which doesn’t even have to be explicit, but if someone’s just seeing or hearing me, it’s some sort of presentation. I feel like with clothes and with music I try to be conscious of that and how I present myself and how that’s received and how accurate I feel that matches up with how I want to be presented against what is actually real.”

For Fuller, clothing and the creative process are all about responding to how others perceive him. Fuller relishes in those perceptions, and finds strength in how everyone understands and finds meaning in things differently. Fuller summed it up as he stated, “I love seeing the strengths in everything. And what I really love is seeing the interactions that take place within those strengths.”