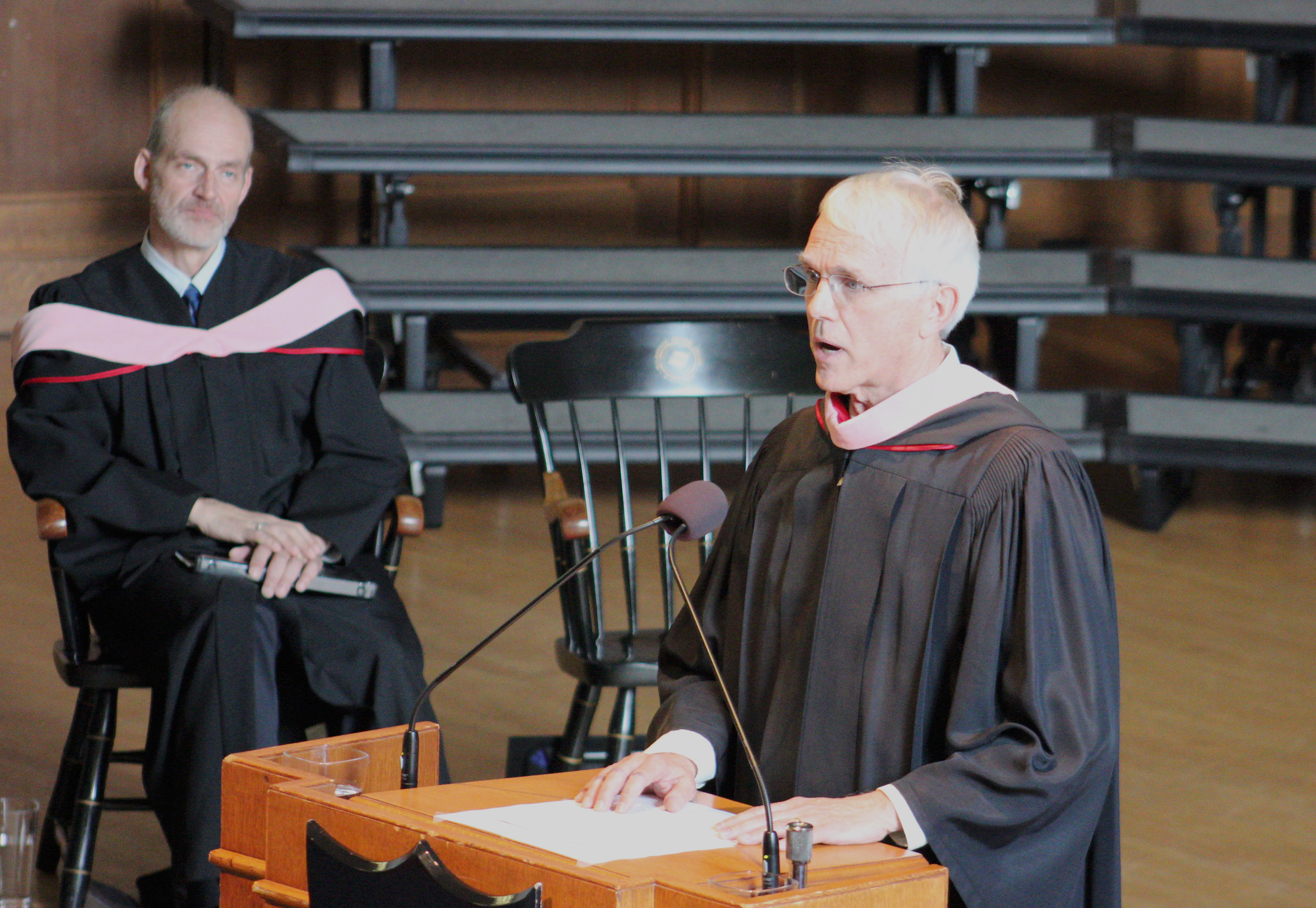 Frank C. Shattuck Professor of Music Kenneth Bozeman delivered the final convocation of the year titled, “Voice, the Muscle of the Soul: Finding Yourself Through Finding Your Voice.”
Photo by Caroline Garrow.

The annual Honors Convocation was held on Tuesday, May 22, 2018, in the Lawrence University Chapel from 11:10 a.m. to 12:20 p.m. Frank C. Shattuck Professor of Music Kenneth Bozeman presented his lecture titled, “Voice, the Muscle of the Soul: Finding Yourself Through Finding Your Voice.” The event also honored faculty and students who have received awards from the university and have been inducted into honors societies.

Bozeman, a tenor, graduated from Baylor University and the University of Arizona with degrees in music performance. He joined Lawrence University in 1977 teaching music theory and voice. In 1993, he became chair of the voice department and began teaching voice science and pedagogy. He is also the chair of the editorial board for the National Association of Teachers Singing (NATS) Journal of Singing. Among his numerous awards, he has received two teaching awards from Lawrence University and the Van Lawrence Fellowship from the Voice Foundation. He has published books on vocal acoustics and pedagogy in addition to presenting about voice science and performing oratorio at various venues around the world.

Bozeman began his lecture with a focus early human experiences with voice. He played a video of a baby responding to its mother’s singing as an example of how voice facilitates communication early in life. Bozeman also explored some of the scientific details of vocalization such as control of harmonic frequencies. He ended the lecture by emphasizing how vocalization is important in society because it induces feeling and empathy in others. He showed videos of patients with Parkinson’s disease and brain trauma who received vocal training. They highlighted how developing voice is important to personal expression and social connection. They also showed how music can help to develop vocal expression.

Junior Emma Webster, a vocal performance major, said, “The ideas he expressed in his lecture have not stopped buzzing around in my mind.” She went on to say, “I am constantly amazed with the powers of voice and music…Music has the ability to impact everyone in a different way, and your voice is something that should be heard.”

In his lecture, Bozeman noted how voice is a cornerstone of community. When asked how the lecture might affect campus, Webster said, “I believe that the campus can think more about the impacts of silencing others.” She went on to say, “Mr. Bozeman discussed how if a child is silenced by a parent or teacher, they are likely to lose access in expressing themselves through their voice. A takeaway from this lecture is that everyone has a voice, but if a person believes that theirs is not valid, a strong means of expressing themselves is lost. I find that people on campus are very quick to tell another person that their ideas are invalid before allowing them the opportunity to express themselves. This idea of silencing causes people to think that their ideas are wrong and suppress their emotions.”

When asked about how the lecture has changed the way she thought about voice, Webster said, “In the lecture, Mr. Bozeman expressed the impacts that your voice has on other people.” She went on to say, “The emotions that you are feeling when you perform resonate strongly with your audience and have an impact on their lives as well as your own. Music can help in times where emotions are both positive and negative, and I believe that it is important to think about the purpose that music is to serve at each moment.”