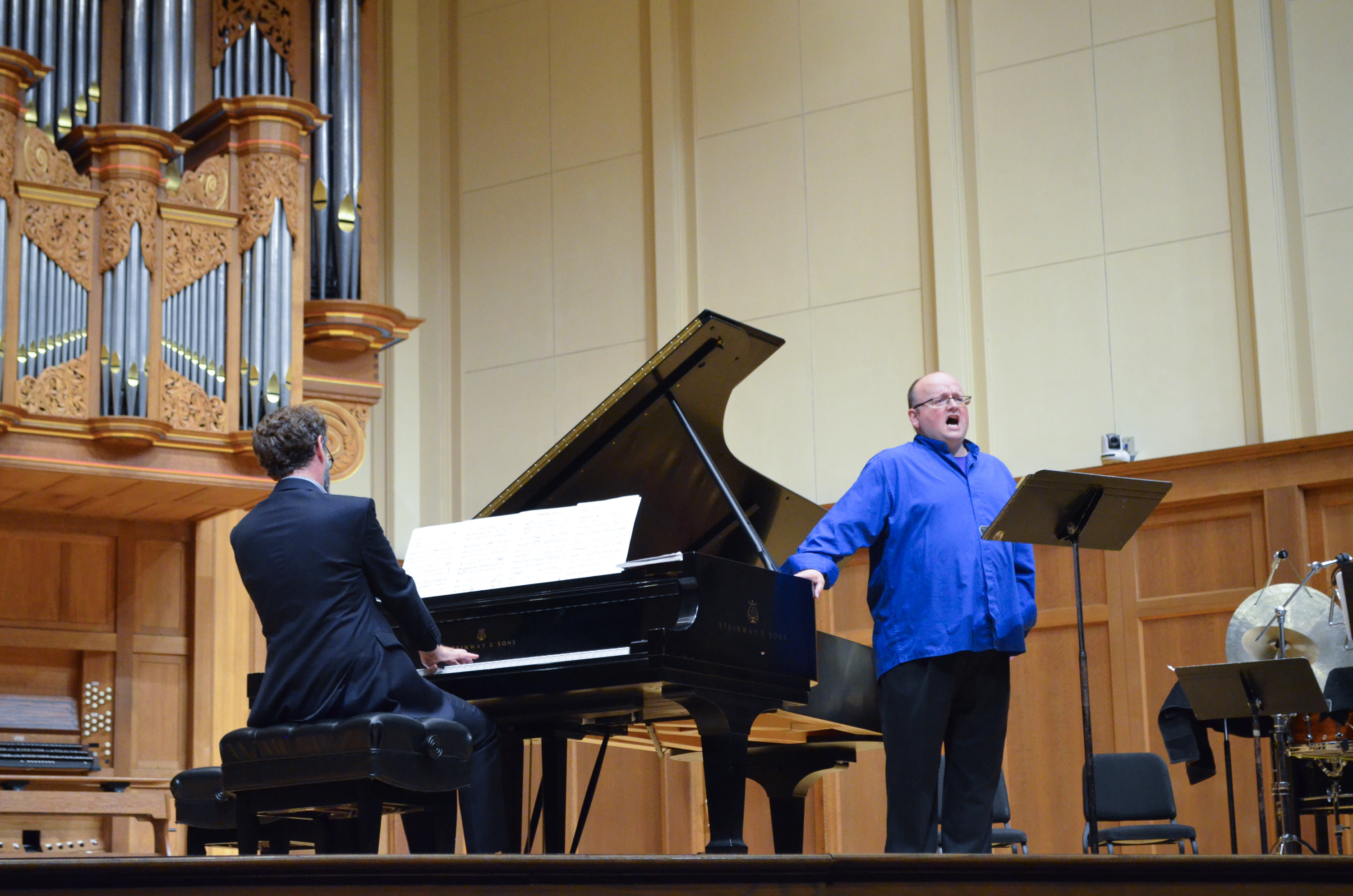 Faculty performs in Lawrence Memorial Chapel in celebration of the centennial of Leonard Berstein.

On Sunday, September 16, several members of the Lawrence University faculty performed a tribute to the centennial of Leonard Bernstein in Memorial Chapel. The works ranged from well-known musical numbers to more unknown pieces such as Bernstein’s “Anniversaries.” They also varied in instrumentation, from standard solo piano and art song arrangements to a haunting piece composed for flute, percussion and piano ensemble.

For the second selection, pianist Michael Mizrahi was joined on stage by tenor and associate professor of music Steven Spears to perform a small sampling of songs. “My New Friends,” a piece from the one-person musical compilation “The Madwoman of Central Park West,” was written as an appeal for loved ones to reconcile. It showcased Spears’ soaring vocals over a lulling accompaniment. The second piece, “Piccola Serenata,” written to imply Hasidic vocalizations, brought out a few chortles from the audience, while the concluding number, “Nothing More Than This” from “Candide,” was tender and melancholic.

The gem of the program was a performance of “Halil: Nocturne for Flute, Piano, and Percussion.” The piece was dedicated to “the spirit of Yadim [Tannenbaum] and his fallen brothers.” Tannenbaum was a talented Israeli flute student killed at age nineteen while fulfilling his mandatory service requirement. The work, weaving between tonal and non-tonal forces, powerfully depicts the struggle of war against, in Bernstein’s words, “the overwhelming desire to live and the consolations of art, love, and the hope for peace.” The ensemble, comprised of associate professor of flute Erin Lesser, professor of music Dane Richeson on percussion and Mizrahi on piano, performed with great sensitivity. Particularly of note was Mizrahi’s piano solo toward the middle of the piece, characterized by an expansively searching and vulnerable quality.

After a brief pause, the program shifted from its previous seriousness to Bernstein’s lighthearted arrangement of Copland’s orchestral work “El Salón México” for piano performed with masterful theatrical intensity by pianist Anthony Padilla.

The program continued with more solo piano as pianist Michael Mizrahi returned to the stage to perform four short and enigmatic character pieces entitled “Anniversaries,” each providing fond, but also mysterious, snapshots of the people important to Bernstein’s life.

To conclude the program, tenor Steven Paul Spears returned to the stage for a humorous delivery of “I Hate Music,” a song written from a child’s perspective. Also notable from this set was a moving performance of the beloved classic “Maria” from “West Side Story.” The entire faculty returned to the stage for the final selections, complete with audience participation.

As the first faculty concert of the school year, the performance was a resounding success and a wonderful tribute to Leonard Bernstein at 100.