Burstein asks: Can We Stand With the Statue of Liberty? 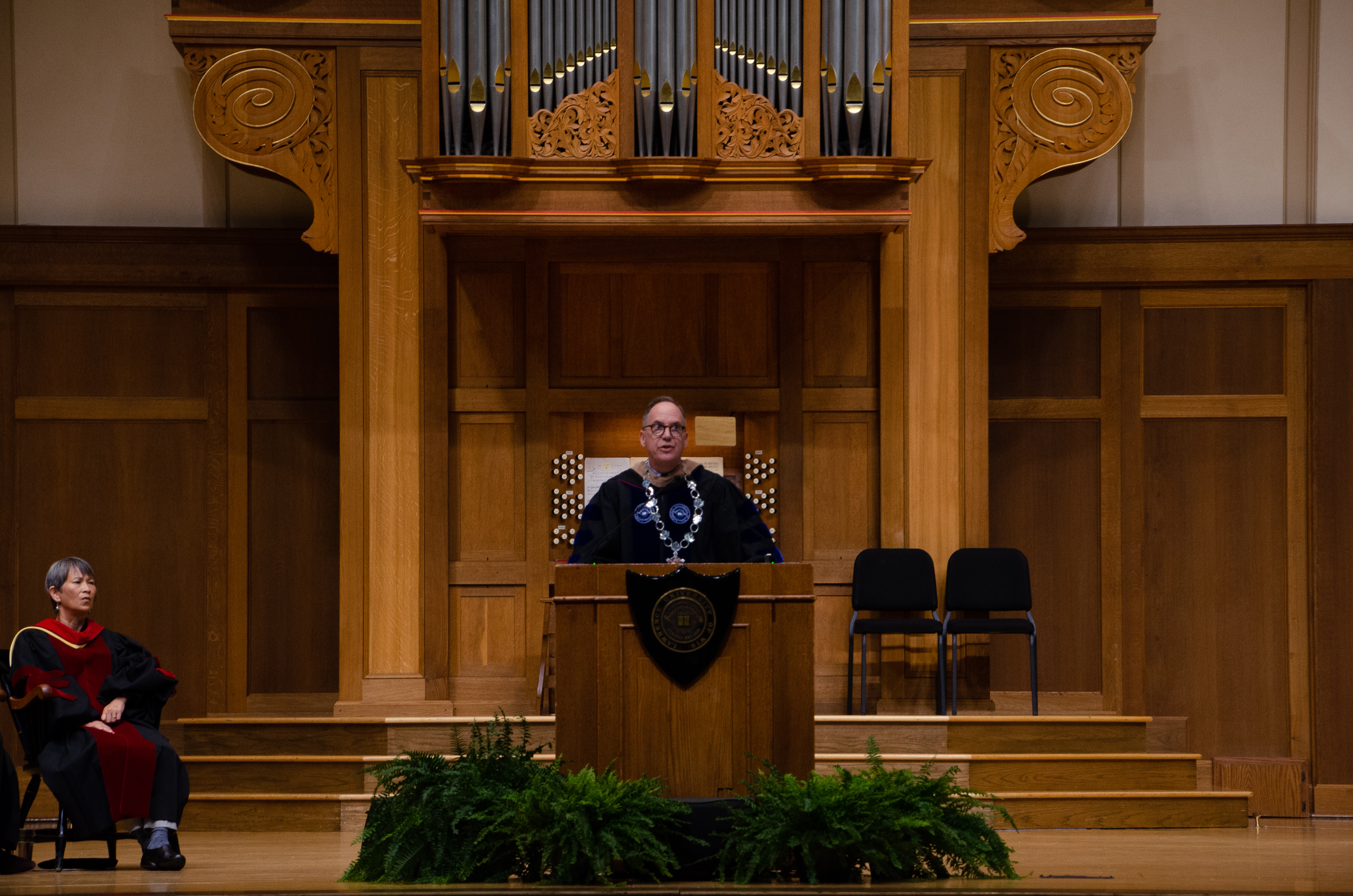 To welcome both old and new members of the Lawrence University community back to campus, the annual matriculation convocation was given by President Mark Burstein. President Burstein’s address, which focused on immigration and refugee issues, was given in the Lawrence Memorial Chapel on Tuesday, Sep. 13 at 11:10 a.m.

“The education provided by Lawrence,” stated President Burstein at the beginning of his speech, “has never been more needed.” According to President Burstein, a liberal arts education is essential to being able to hold successful conversations surrounding immigration and the refugee crisis. When introducing President Burstein, Assistant Professor of Art History, Curator of the Wriston Art Center Galleries and Museum Studies Interdisciplinary Area Program Director Beth Zinsli announced that, “[Burstein] considers this to be the start of a conversation.”

“The numbers alone are shocking,” said Burstein before he cited facts about the extent of the refugee crisis, such as the statistic that at least 68.5 million people have been displaced by various issues. He emphasized that over half of the people displaced are children.

Burstein mentioned that most refugees move to countries adjacent to their own, and that the number that reside in the United States and Europe is a relatively small fraction of the total refugee population.

“We as a nation,” continued Burstein, “have struggled to learn from our personal histories.”

“The United States is almost entirely made up of immigrants,” emphasized Burstein who related this point to his family’s own immigration from Europe in order to avoid religious persecution.

There are many different immigration stories within the Lawrence community, and Burstein stated his confidence that the range of immigration stories is just as broad at Lawrence University as it is throughout the country. He posed the question “Can we take our personal narratives and develop policy from them?”

After having posed this question, Burstein went on to discuss the history of debates surrounding immigration and the question of who can be an American. The founding of Rhode Island was one of the first points brought up by Burstein.

Since Rhode Island was one of the first colonies founded that was willing to accept people of any religion, this, according to Burstein, founded the long history of debates on who can be an American citizen due to how Rhode Island’s acceptance differed from other colonies.

Next, Burstein described immigration policies that were put in place in the 1920s which cut off allowing immigration from non-Anglo-Saxon countries, and how at around the same time, activity from the Ku Klux Klan increased. President Burstein related this to current restrictions on immigration and the increase in incidents of racial bias and hate crimes. While quotas on immigration were ended in 1965 by President Johnson, Burstein stated, “this set up debates on immigration to today.”

“Knowing our past struggles,” concluded Burstein, “how can we continue to stand with the statue of liberty?” He then mentioned Lawrence University’s involvement in lawsuits that have kept Deferred Action for Childhood Arrivals (DACA) in place, as well how the university has offered employment to immigrants. However, President Burstein stated, “we need to do more,” emphasizing the need to reach out to refugees in our community.

President Burstein extended the offer to email him with thoughts on this topic. This was the first in the Convocation Series of the 2018-19 school year. The next Convocation will feature Professor of Political Science and Natalie C. Holton Chair of Letters and Science Katherine Cramer from the University of Wisconsin-Madison. Cramer will be giving her presentation, “Listening Well in a World That Turns Away,” on Tuesday, Oct. 23 at 11:10 a.m. in the Lawrence Memorial Chapel.