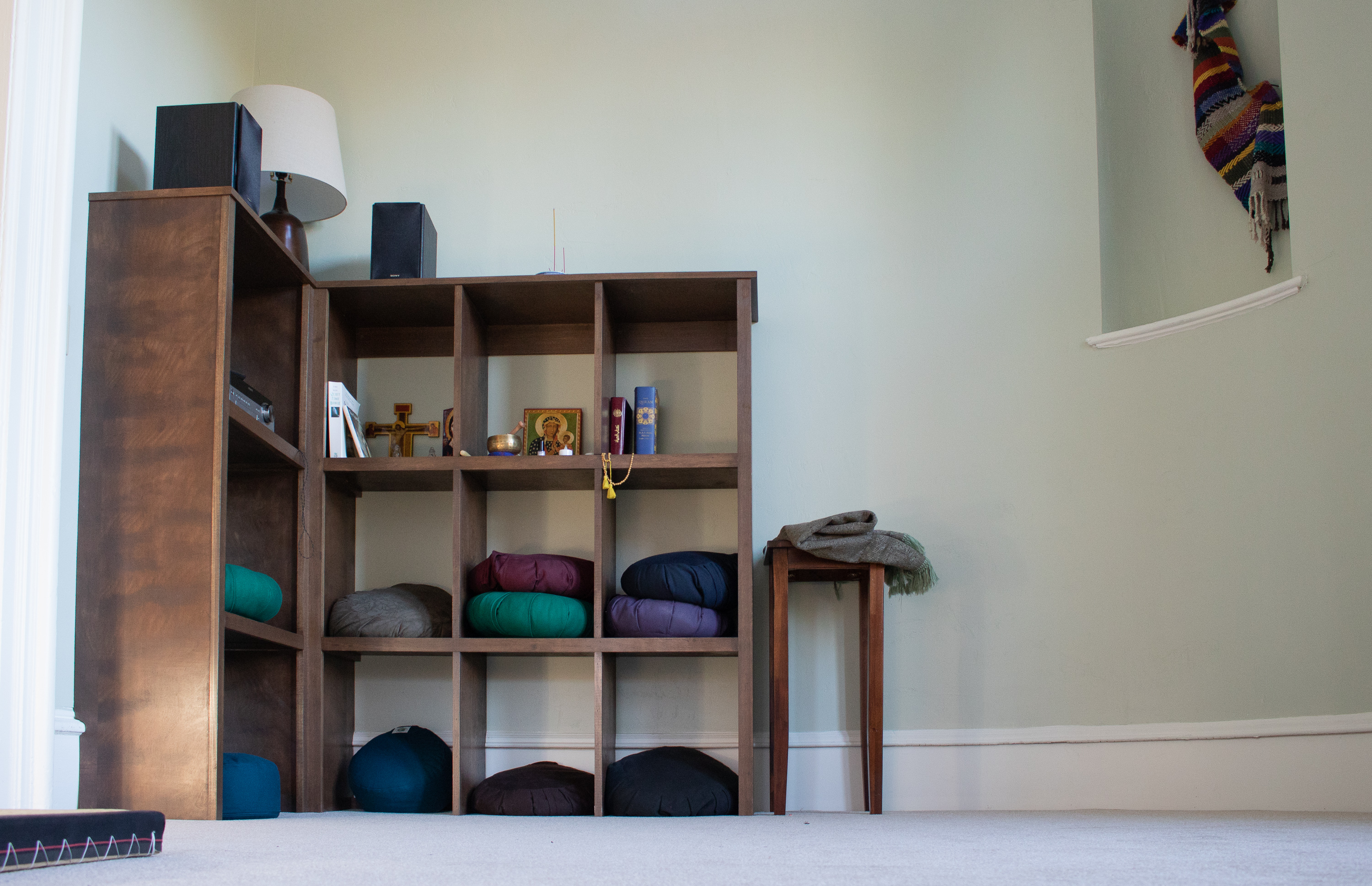 The meditation room in Sabin House.

As fall term steadily draws to a close, the cloud of stress which has been constantly hovering over campus threatens to engulf us in a deluge of despair. Once a week, however, Assistant Professor of Religious Studies Connie Kassor offers relief from the wear and tear of Lawrence life at a Buddhist meditation session that is open to all. Every Wednesday, from 4:30 to 5:00 p.m., anyone who needs to pause for a breath of air can gather at Sabin House for a guided group meditation which pulls from the Buddhist tradition.

Though Kassor makes it clear that anyone is welcome regardless of religious or non-religious belief, these meditation sessions do provide a Buddhist context, unlike more secular meditation practices such as mindfulness meditation. Kassor explained that mindfulness meditation is a Western concept based off of the work of neurologists and psychologists to create beneficial stress relief which is backed up by science.

While it does away with many of the specifically Buddhist aspects of meditation, Kassor stressed that there is equal value in both practices. “It doesn’t mean that the mindfulness stuff and the secular stuff is somehow less; it’s just different. And it’s equally beneficial, it’s equally important…what I am trying to do is, in the process of meditating, also highlight some of the broader contexts and point out where some of these ideas are coming from.”

While these Buddhist meditation sessions at Sabin offer an informative perspective, ultimately Kassor’s meditation sessions are also meant to simply bring positivity to the strained atmosphere of the Lawrence campus. “The big goal is that everyone alleviates their suffering and is happy. But on a much more small goal, everyone in the Lawrence community—faculty, staff, students—are so busy all the time, and if I can offer a space and create a kind of situation in which anybody who wants to could just sit and do nothing for a little bit, that’s a really rare thing, and that might be the only time in your whole week that you get to sit and just give yourself permission to just chill and do nothing.”

Kassor emphasized: “Really do nothing, like not scroll through your phone or think about your homework that you have to do, but really be intentional about putting all that stuff down.” Allowing oneself a moment to relax in this way can often help re-create some calm amidst the chaos of the week. Kassor also pointed out that although adding meditation to an already-full schedule seems counterintuitive, the busiest times are actually when you most need this chance to pause.

Kassor described the course as “half class, half meditation retreat” and mentioned “from my perspective, because I teach Buddhism, because I am Buddhist, I think there’s benefit to understanding where these meditative practices come from and I think there’s benefit to understanding how and why different meditative practices exist in the ways that they do.”

While registration for this Winter’s D-term has closed, students who are interested in studying Buddhist meditation further have the opportunity to do so while also staying abroad for a few weeks in Nepal during the Field Experience in Religious Studies, offered next D-term 2019. The course, which includes a three-unit class that will meet during the fall term before and winter term proceeding the actual trip, is designed around a traditional Buddhist model of learning.

This model is translated as “hearing, contemplating and meditating,” and Kassor described how each aspect is realized in the class: “the hearing part involves listening to lectures or reading a book, the contemplating is digging a little deeper, investigating ‘what does this mean how does this apply to my life?’, and the meditation is kind of like internalizing it.”

The class will be able to live and study with monks in a monastery near Nepal’s capital city, Kathmandu, for approximately two weeks. Applications for Field Experience in Religious Studies will be accepted during Spring term, and students interested in this opportunity to delve into Buddhist philosophy and practice can find further information on the Religious Studies Facebook page.