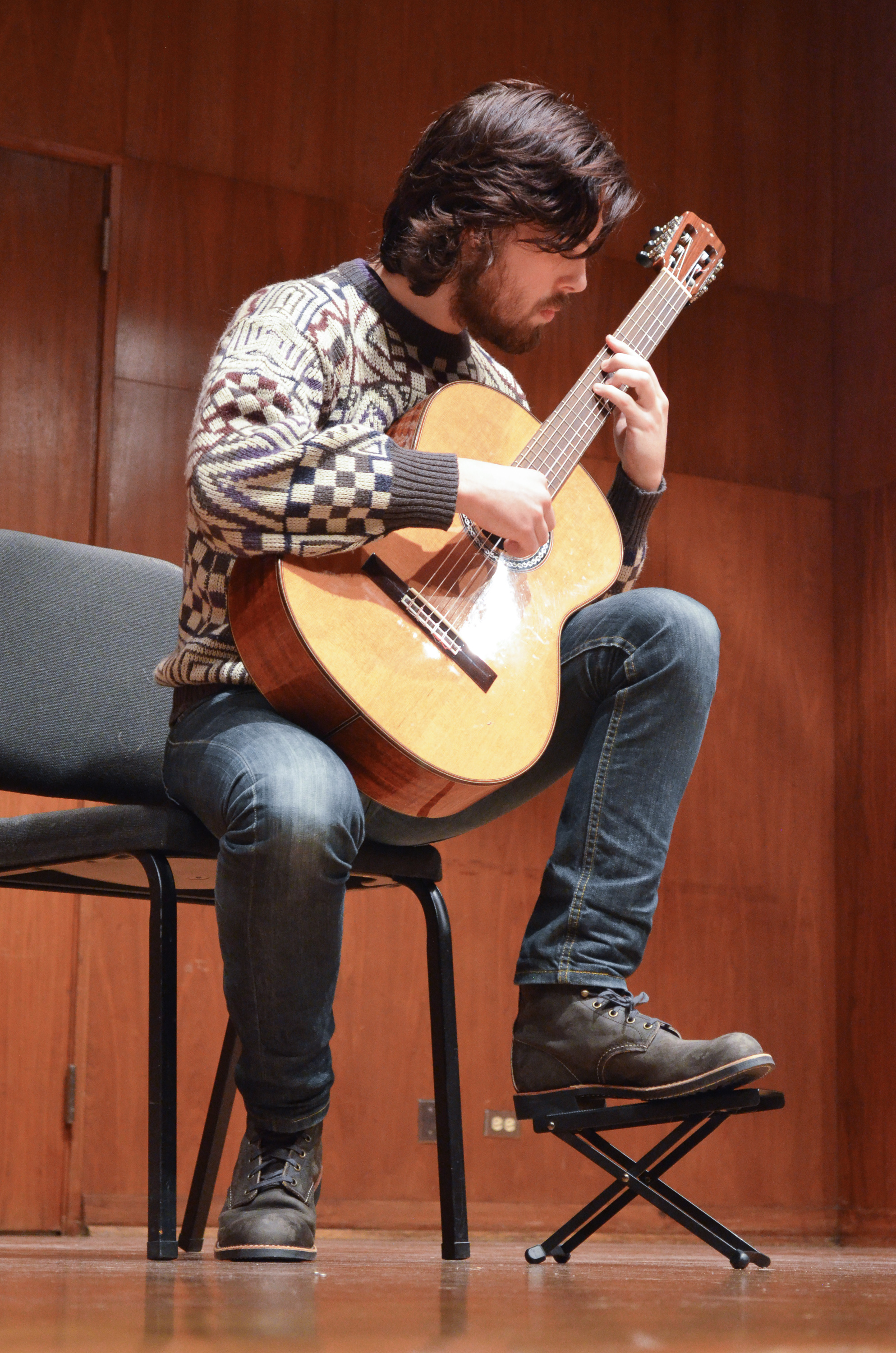 Senior Alex Layton is one of six musicians who performed in the guitar studio recital.

Last Sunday, the guitar studio presented a recital in Harper Hall with six different guitarists performing a variety of tunes. Many of the pieces departed from what we may normally think of as classical guitar playing.

The first and last guitarist to perform was senior Rick Kubly, who started with two pieces by Leo Kottke. The fingerpicking Kubly employed was different from the other performers to come after him, like the genres of Kottke’s pieces, which draw more from folk and blues roots than from more European forms. Kubly does an impressive job, and he also played a stunning guitar.

Following Kubly, sophomore Alex Ruffolo performed “Variations on a Theme by Mozart, Op. 9” arranged by Fernando Sor. This piece was less folk sounding and much more in the classical vein. This piece, along with many of the others performed in the recital, beautifully transported listeners to another location, seemingly far away from Harper Hall. Following Ruffolo, freshman Willy Quijano performed “Prelude No. 4” by Heitor Villa-Lobos. This was a thoughtful and ruminative piece with occasional bursts of quick energy and intense fingerpicking. Next, senior Alex Layton stunned the audience with his beautiful rendition of “Canción de Cuna,” which translates to “cradle song,” which is more or less synonymous with lullaby.

Fifth-year Jack Kilkelly-Schmidt was deep in a trance-like state as he performed “Chaconne from Partita in D minor” by Johann Sebastian Bach. Easily the longest of all the pieces performed, Schmidt employed a variety of techniques while playing this incredibly complex and demanding piece. As we watched, a friend and I commented to each other that just as we thought the piece was going to end, there was a whole other section waiting to be played. Yet it didn’t become tiring, as Schmidt’s intense onstage presence made it engaging from start to finish.

Another Villa-Lobos piece, “Prelude No. 1,” was performed by freshman Matthew Warren. It was an impressive exercise in complicated fingerpicking patterns. It sounded slightly similar to the other Villa-Lobos Prelude performed earlier in the night, but that is perhaps by design.

The performance ended with Kubly playing another Kottke piece, titled “The Fisherman.” The repetition of performer and composer tied the entire recital together in a meaningful way. Overall, the audience was presented with connected and meaningful performances instead of just individual displays of talent one after another.