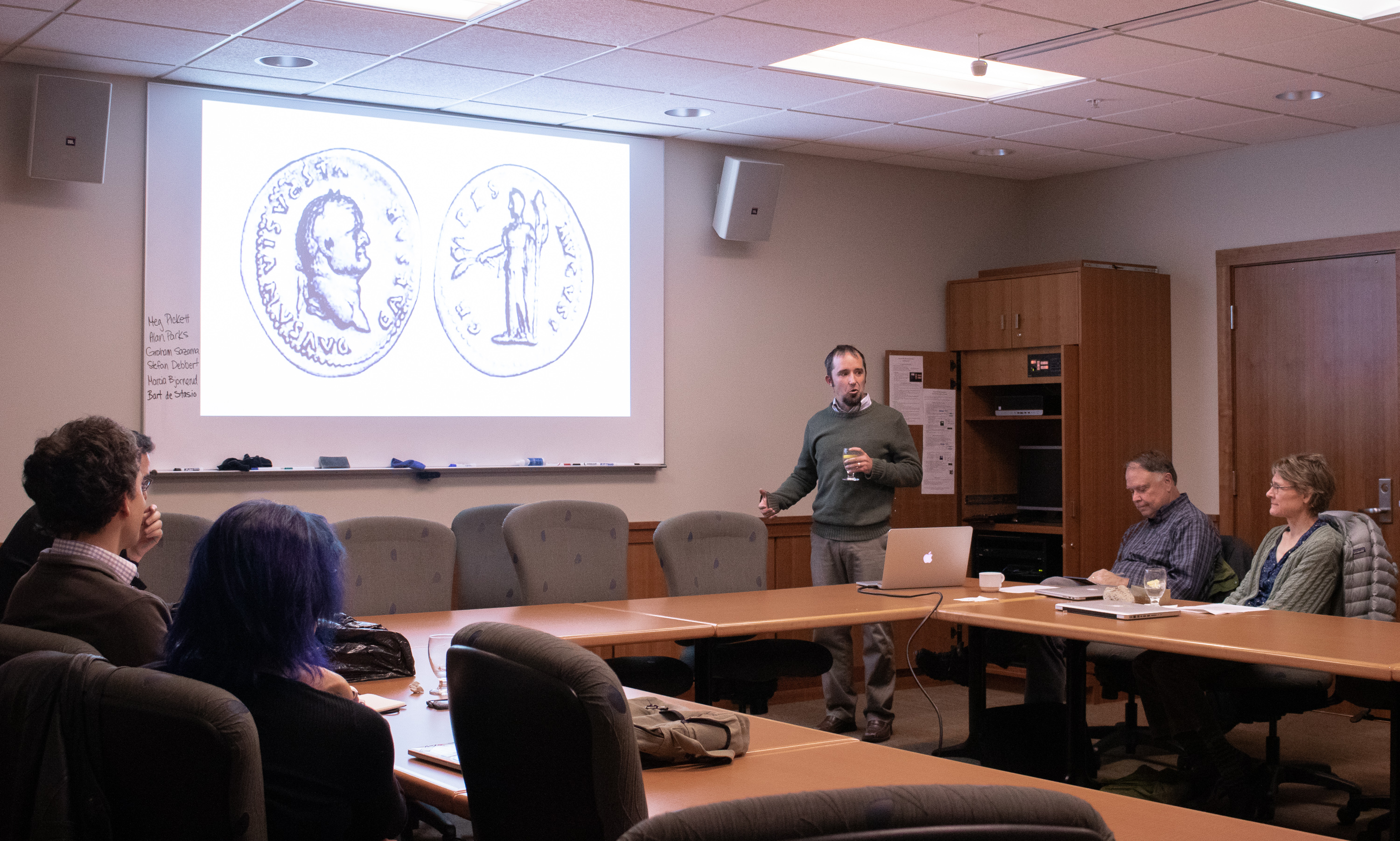 On Monday, Oct. 29, members of Lawrence’s STEM faculty presented this year’s Helz Symposium entitled “Scientia Aeterna: Modern Science and the Ancient World.” The event featured six professors who gave mini-lectures on topics drawing from a broad scope of scientific fields and their applications. The stated purpose of the lectures was to nuance the audience’s understanding of the relationship between ancient and modern science; aside from the former being much more sophisticated than many assume, this relationship is not one-directional. Ancient discoveries and methods evolved into our current facilities, which in turn enable us to learn more about the past, as with carbon dating or analysis of the ruins of Pompeii.

Professor of Physics Meg Pickett talked about astronomy, saying that it “has a wide swath across time and cultures. Many achievements aren’t seen in our textbooks, such as those of Neolithic and non-Western astronomers and of the Ionian school.” She mentioned the contribution of Pythagoras to the idea that celestial bodies are spherical, rather than discs or infinitesimal points. This was deduced from the Earth’s shadow on the moon; the only shape that casts a circular shadow no matter the angle is a sphere. Another discovery of Earth’s shape that was acknowledged was Eratosthenes’ experiment with wells: he demonstrated that while the sun may be shining directly down a well in one city, it is not in a city 800 km north. He used this information to make a very close approximation of the Earth’s circumference, and two millennia ago no less. Picketts included these examples as a slight toward Flat Earthers, saying, “Astronomy is still relevant. After all, we still have people (“Mad” Mike Hughes) launching water powered rockets to prove the Earth is flat.”

In his lecture, Professor of Mathematics Alan Parks referenced two questions mathematicians have always been asking. They are (1) “What is the axiomatic starting point for math or science (the set of assumptions we can make without proof)?” and (2) “What does it mean for objects to be equal to each other?” Parks illustrated the evolving approach to these questions across history by contrasting reliance on geometry versus number theory. “The ancient Greek notion that geometry is primary and rigorous persisted through the 18th century,” Parks said. “This is why we see Newton using geometric models in his ‘Principia.’” Geometry as a means of mathematical proof has been mostly phased out in this sense; many of the geometric arguments in Euclid’s “Elements” would be understood today in algebraic terms. An example of an argument in the former vein that was shown is placing a polygon inside or outside a circle and increasing its number of sides to make it as close to the circle as one wants (circles are “infinity polygons”). We then say that the areas of the circle and polygon are “arbitrarily close;” this is how the answer to the aforementioned second question came to be understood.

Drawing from his expertise in inorganic chemistry, Professor of Chemistry Graham Sazama discussed the Bronze Age (c. 3000 BC – 1200 BC). After mentioning tales of mythical islands called the Cassiterides (from “cassiterite,” which is tin ore), he explained the process of refining copper into the harder and stronger bronze. Roughly speaking, hardening happens by combining different elements, causing “dislocations” in the arrangements of molecules which get them tangled and harder to move. Sazama pointed out that the discovery of this process was probably accidental. “People in the Bronze Age had ideas about atoms, but they could not have known about molecular dimensions that form the basis for dislocation,” he said.

An image of an ancient Roman coin opened Professor of Chemistry Stefan Debbert’s lecture. On it is depicted the Roman goddess of agriculture, Ceres, holding several crops, one being an opium poppy. “Opium was the pharmacopeia of the ancient world,” Debbert said. “It was seen as a medicine, not a vice.” He pointed to its use as a pain killer, used sometimes as a topical agent but mainly in the form of lozenges. Ingesting opium this way is surprisingly inefficient; Debbert explained this by analyzing the active component of opium, morphine. “The ‘water-like’ parts of the morphine molecule give it high water solubility,” he said. “However, water has a hard time fighting through both the lining of the stomach and the blood brain barrier, both of which are oily.” Around of the turn of the century, scientists sought to increase the efficiency of morphine absorption by adding chemical compounds called esters. These cover up the aforementioned “water-like” parts of morphine, and they are broken off only after the molecule has passed through the body’s oily barriers. “Scientists thought this would make morphine less addictive; this was seen as heroic, so they called it heroin,” Debbert said, ending on an ironic note.

Professor of Geology Marcia Bjornerud talked about Mt. Vesuvius’ famous eruption on Pompeii. She explained subduction zones: oceanic slabs fill with water and eventually this causes magma to rise. The magma in this case is of relatively low temperature and high silica content, with these factors making it explosive. The result of this kind of eruption is towering clouds of ash. In a letter to Tacitus, Pliny the Younger likened these clouds to pine trees, having a trunk and spreading out at the top. To this day, “Plinean eruption column” is a geological term. Our link to the ancient world here is how ash encases things and preserves them. Bjornend passed around a coin cemented in hardened ash to demonstrate this.

The color “royal purple” is familiar to many of us; Professor of Biology Bart de Stasio’s lecture explained its origin. Also known as “Tyrian purple,” this color comes from dye extracted from rock snails from the genus Murex.  A compound in the snail’s shell has to be extracted in a very labor-intensive process. As many as 12,000 snails were needed for just one garment, which understandably drove up costs such that only very wealthy people (often of royalty) could afford them. This process was surprisingly sustainable, and ancient Phoenician records do not mention snail populations getting cleared out. This may be in part due to the snails’ efficiency at avoiding predators, giving them a high reproductive rate. While advances in technology have yielded better means of dying, craft projects still exist that use Murex snails.

Following the lectures, several interesting observations were made. One concerns the general process through which science becomes relevant to us: methods are created first, then technology catches up to apply them. Technology is central to another one of science’s relationships: industry. It was noted that science and industry often coincidentally look for and discover similar things, just in different ways and for different reasons. After all, the first antibiotic came out of the dye industry. Science’s intersection with other fields was echoed in an observation about classics and linguistics. Ancient scientific texts may include language that is ambiguous to us today, but at some point, our advances can enable us to expel uncertainty and fulfill the original purpose of such documents.