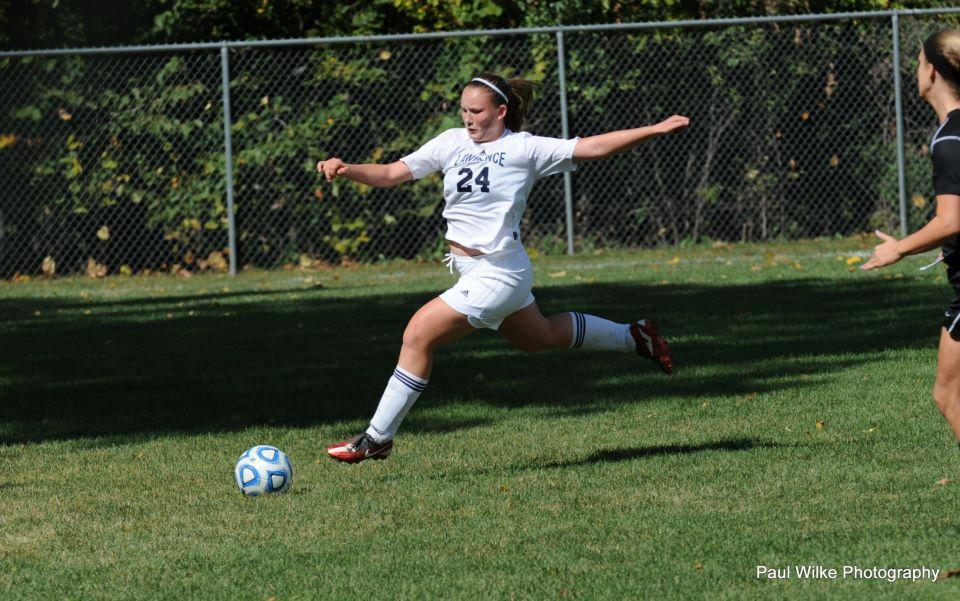 Coming off a great last weekend, Lawrence University women’s soccer had a frustrating follow up this weekend. Facing two much better opponents this week turned out to be a tough test for the Vikings as they lost both games convincingly. Saturday’s opponent Lake Forest was 2-0 in Midwest Conference play (4-4 overall) before visiting Whiting Field West. Lawrence struggled early in the game with the Foresters speed and skill, which allowed the visitors to capitalize three times within the first 19 minutes. Lake Forest got too comfortable towards the end of the half playing more of a possession game, allowing sophomore midfielder Sarah Tiano to break through and score off her own rebound.

Lake Forest opened the second half once again with fierce speed and it turned out to be too much for the Vikings who were simply unmatched. Lawrence struggled to maintain possession of the ball in the game, enabling the Foresters to counter attack and force Lawrence to leave too much gap between their defensive and midfield lines. In the second half Lake Forest did not slow down running Lawrence up and down the field. They scored just 50 seconds in and then ended the campaign in the 69th minute with their final goal to make it 4-1.

Sunday’s game unfortunately did not differ much from Saturday’s. The visitors, Carthage of the CCIW, who have had an average season thus far, showed they were a very tough opponent for the Vikings. Though the play was back and forth in the beginning, Carthage managed to score twice within the first 30 minutes. Lawrence answered quickly cutting the visitors lead in half in the 31st minute after a goal by freshman midfielder Kirstin Edwards. The Vikings tried to keep strong after reducing the lead in half. Struggling with another fast and well structured opponent simply wore the Vikings down and Lawrence, who seemed fatigued from yesterday’s game, just couldn’t keep up. The Visiting Lady Reds increased their lead, scoring in the 35th and 40th minute. After the half, Carthage ended the scoring spree in the 48th minute with their fifth goal.

Junior Amanda Ollerer commented, “Lake Forest was just too fast for us and they capitalized on all of our mistakes. Though I felt Carthage was a worse opponent than Lake Forest we were tired coming into the game and our play pretty much reflected what happened the day before.”

Lawrence was definitely tested this weekend showing that they have a lot of work to do to contend with the best in conference. Lawrence next game is away against Carroll 2-1(5-2-1), an important game against another good MWC opponent.