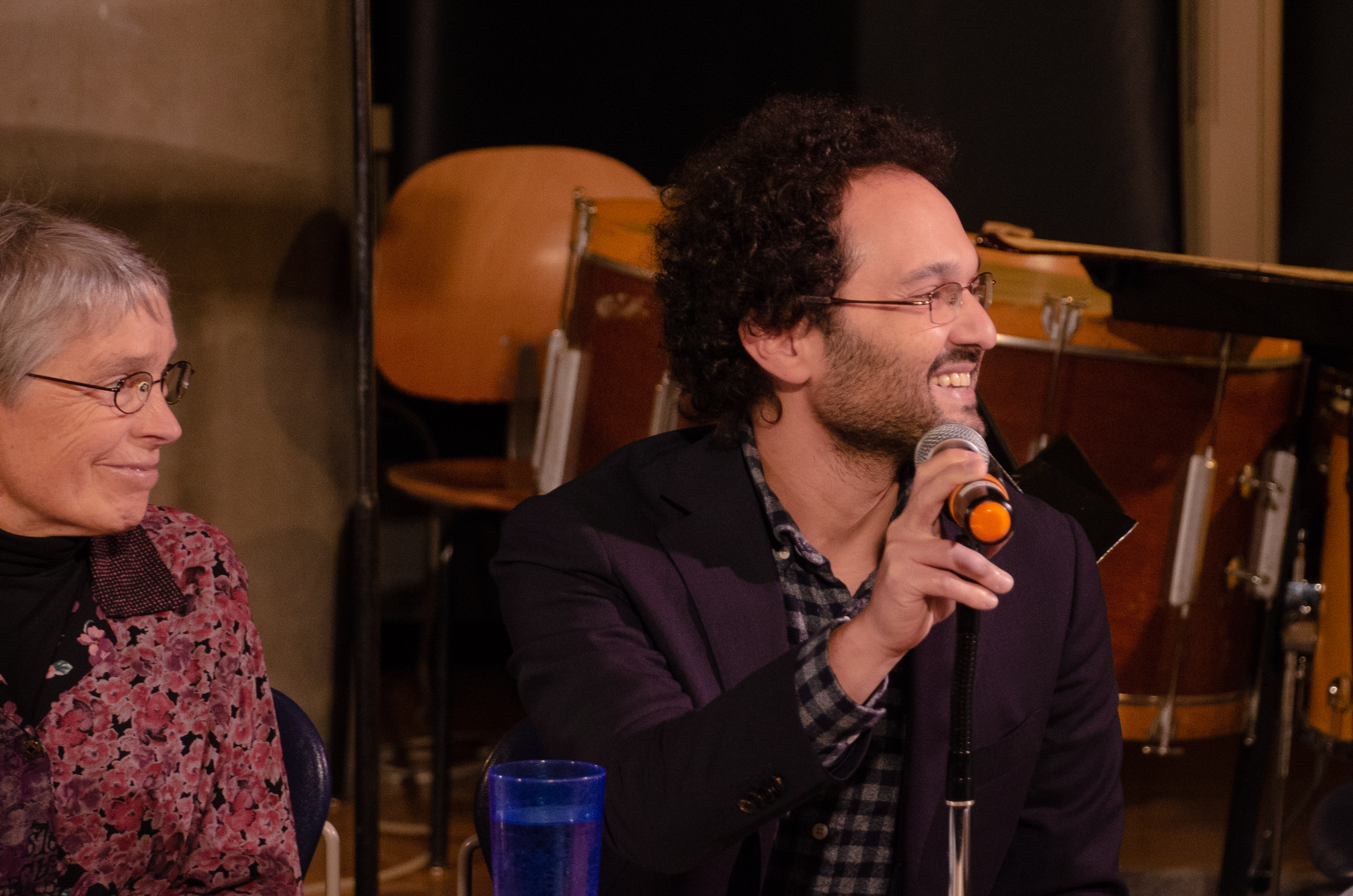 David Hausman (right), a lawyer with the ACLU, spoke about the organization’s fight against the Trump administration’s 2017 travel ban. Midwife Liz Ramlow (left) spoke of her experiences providing health care services to high numbers of refugees.

On Tuesday, Nov. 6, Amnesty International and GlobeMed hosted a symposium on the international refugee crisis, which acted as the centerpiece of a weekend filled with events meant to bring awareness to refugee issues. At the event, a panel of experts shared insights they have gained through their individual experiences and answered audience questions. Moderated by Edwin & Ruth West Professor of Economics and Social Science and Professor of Government Claudena Skran, the panel consisted of Pulitzer-winning reporter for the Milwaukee Journal Sentinel Mark Johnson, American Civil Liberties Union (ACLU) attorney David Hausman, nurse-midwife for Doctors Without Borders Liza Ramlow and LU alum and Iraqi refugee Amal Abbas ‘14. The symposium was followed by a concert in which LU students and faculty played music related to the refugee crisis.

The night began with each panelist sharing their perspective on the refugee crisis. First was Milwaukee Journal Sentinel reporter Mark Johnson, who reported on a health mission at the Al Zaatari refugee camp in Jordan. He described conditions in which health care was dangerously hard to come by.

“Many in the camp we met were so poor that they would trade food to buy medicine. We saw young men outside the grocery store yelling, ‘You wanna sell this?’” He said many refugees were unable to get healthcare in Syria due to the Syrian government’s targeted bombing of hospitals. He said that since 2011, there have been 542 attacks on hospitals attributed to the Syrian government and Russian forces.

During his visit, Johnson also learned of the devastating consequences that would lead one to be a refugee. When he asked one man what it was like to leave Syria, the man said, “There is a condition of fear around you that is huge. Everything around you is worth nothing. When you feel like your life is directly threatened, all you think about is escaping.”

Johnson said that this contrasts the inaccurate portrayal of refugees in the media, which often focuses on the potential for terrorist activity among these populations. Johnson said, according to the Cato Institute, that “No refugee accepted to the U.S., Syrian or otherwise, has been implicated in a major terrorist attack since the Refugee Act of 1980.”

ACLU junior lawyer David Hausman then shared his perspective on the refugee crisis. He largely discussed the ACLU’s fight against the Trump Administration’s proposed travel ban from early 2017, which aimed to prevent people from seven Muslim-majority countries from entering the U.S.

Hausman discussed the chaotic process of blocking this ban in court, which involved the ACLU challenging the ban in court less than a week after Trump signed the executive order that put the ban into effect. A court order to stop the ban was achieved, and Hausman described a massive crowd cheering outside the court thereafter.

He said of the experience, “On the one hand it was terrifying, because we saw what we were up against in the administration. But on the other hand, I’ve never seen a crowd that large before to support refugees.”

Hausman said that people seem more moved by refugees when they can actually see them. He stressed that most issues involving refugee treatment “are really hard to see, and really hard to care about.” He discussed a Haitian client of his, for instance, whose plea for asylum was appealed by the government twice, leaving him imprisoned in a windowless room for two years.

In his view, however, the Trump administration’s “outrageous cruelty” may be bringing some of these issues to light. Hausman ended by reading a letter sent from a fifth grader to a refugee camp through the ACLU: “Dear kids: I may not know you, and you may be far away, but you are my friend.”

Nurse-midwife for Doctors Without Borders Liza Ramlow spoke next. She said that on assignments, her mission was to provide health care services for women who had been sexually abused, women who had been impregnated by rape or women who have had trouble giving birth at home. From dealing with settings containing high numbers of refugees and displaced persons, she said she’s learned that “if they tell you their life is in danger, their life is in danger. They’re not making this up.”

Ramlow stressed the need to help people in these situations. Especially considering that the U.S. has had a hand in destabilizing many of the places that are currently producing refugees — such as Syria, Afghanistan and El Salvador — Ramlow saw that it was essential for the U.S. to provide aid. “When asked if we need to lend a hand, to me the answer’s yes. What goes around comes around. We see that in environmental issues, and we certainly see that when people are displaced in somewhere like Central America.”

Ramlow said that, during her travels, she’s met so many people that “she’d like to be her neighbor,” and that perhaps the US should be more welcoming toward these people.

Then, Lawrence alum and Iraqi refugee Amal Abbas ‘14 shared her perspective on the refugee crisis. She discussed the brutal situation her hometown of Baghdad was in that caused her family to leave. She described a day when her school was bombed by US forces on a day she had off: “When we walked in the school, we saw blood on the floor, we saw glass shattered, we saw headbands on the floor…since that day, we’ve never been back to Iraq.”

Abbas described driving to Jordan the next day with nothing except clothes. Abbas and her family lived in Jordan for five years, three of which were spent going through the long, intensive process of applying for refuge in the U.S. Finally, in 2008, her family was placed in Chicago. To end, Abbas summarized, “Not all refugees are terrorists. They’re not here because they want to hurt you. They’re here because they want to be safe.”

The panel then took questions from the audience. One question concerned how the current influx of Central American refugees will achieve asylum in the U.S. Hausman said, “I don’t think it’s going to be a crisis. It’s not a very large group of people. Our normal procedures should work just fine…it would normally pass by without notice.” Ramlow added that Doctors Without Borders is watching this situation closely to see if any health services will be needed.

Another audience member asked how one person can make a difference in this crisis. Abbas recommended voting, finding ways to counteract stereotypes and volunteering at organizations that help the disenfranchised. Abbas mentioned Care for Real in Chicago, for instance, which is a nonprofit that operates food pantries and provides jobs for people in poor communities.

Ramlow, meanwhile, recommended simply being neighborly to refugees or displaced persons that you might know. She said, “Our culture can be very lonely for the refugees I’ve met. They’re used to living in tight communities, and it’s a very different situation here. There’s a lot of depression among people that move here, because our culture emphasizes doing your own thing.” Inviting refugees to be part of your life, Ramlow said, is an excellent way to help with the current crisis.

After the symposium, there was a concert that featured Lawrence students, alumni and faculty performing songs inspired or written by refugees. One notable performance was of a piece composed by Daniel Whitworth ‘18, which contained lyrics sung by Jamil Fuller ‘18 that were lifted verbatim from Fox News coverage of the Trump administration’s child separation practices on the Mexican border.

Another special performance was of Charles Mingus’ “Haitian Fight Song.” Lawrence Instructor of Dance Margaret Paek said that Mingus said of the song, “I can’t play it right unless I’m thinking about prejudice and hate and persecution, and how unfair it is.” It was performed by a five-piece band made up entirely of LU music faculty and featured a group of backing dancers led by Paek. Performances like these closed out the night in a truly affecting fashion.