Athlete of the Week: Erin Lengel 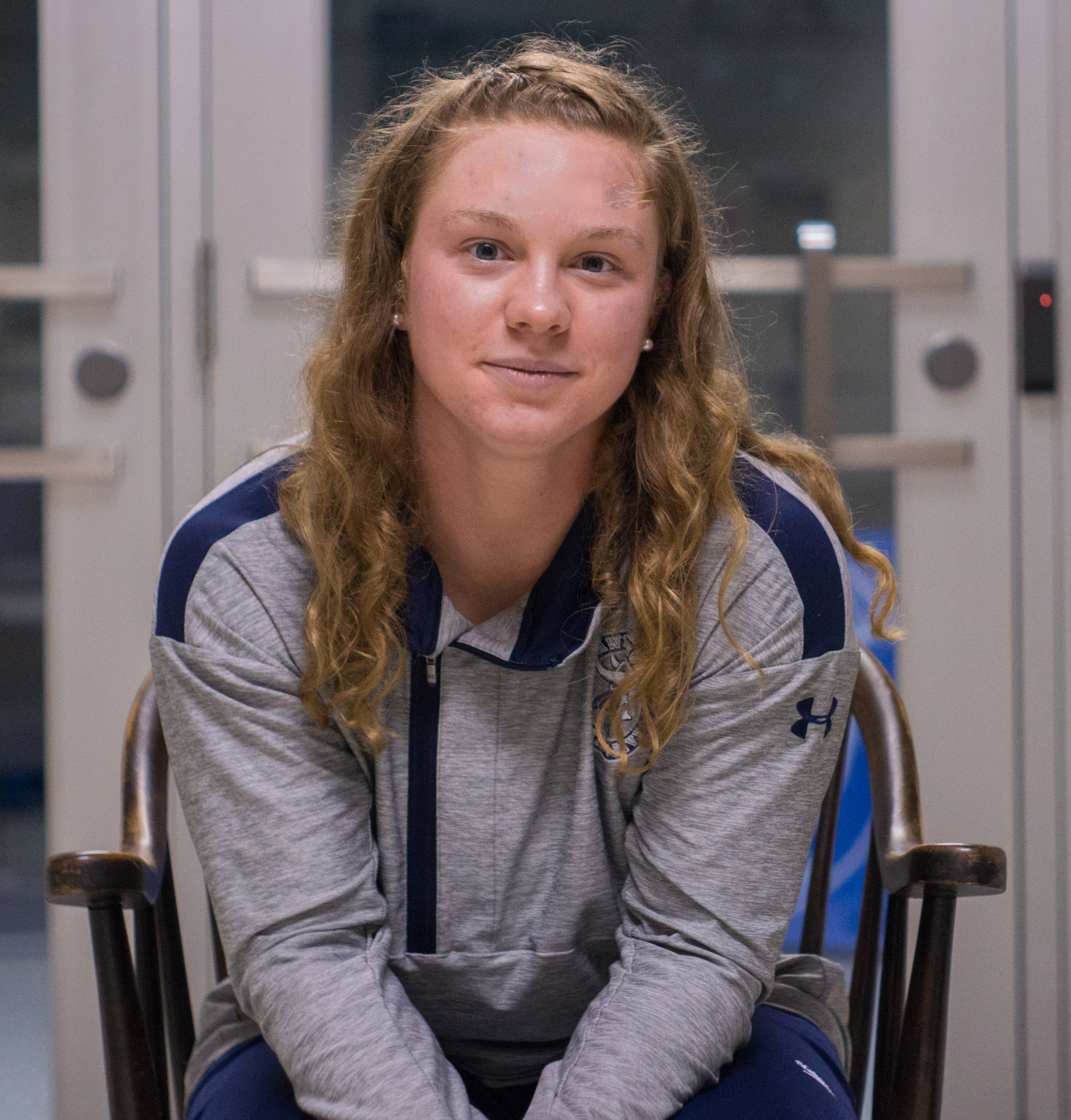 There are absolutely no negative comments that can be made about this extraordinary human. Sophomore swimmer Erin Lengel wows everyone she meets with her dazzling smile, bubbly personality and rock star attitude. You cannot help but smile when you see her. She has this effect on everyone, especially her teammates.

Not only is Lengel a phenomenal athlete, competing at a high level in the pool, but she is also the best teammate anyone could ask for. She brings high scores to the team as well as positivity. Lengel says that she “couldn’t ask for better teammates. [They] know how to compete and have fun, and that’s awesome.”

Erin Lengel has had a great season so far. She has obtained a personal record in at least one event in every meet so far this season. While the season is at its peak intensity, Lengel remains completely focused on continuing to get better, faster and stronger in order to help her team reach their goal of beating Lake Forest College at the conference championship meet this year.

“While I can see how some people see swimming as an individual sport, and I do agree that everyone has to hold themselves accountable, I really think that swimming is absolutely a team sport,” said Lengel. “We compete in a variety of events, but when we win, we score higher for our team. The more people win, the higher the team score, which means we are more likely to get a big team win. It all comes back to the team.”

Even when asked questions about herself, Lengel had a way of circling right back to the amazing people on her team. She described her team as determined, focused, silly and goofy. “We are all so supportive of each other,” she explained. “We have little sayings that have made their way into our everyday vocabulary. Like once, saying ‘bud’ towards each other started off as a silly thing to do, but now it’s just part of who the team is and how we talk to each other.”

Lengel competes in whatever events they tell her to because she is focused solely on what will benefit the team the most. While she does a lot of 200 freestyle and backstroke, it seems that there is always something new or surprising for her each meet. She rises to the occasion like the champ that she is and tries her very best at every meet.

When asked what she contributed to the team, Lengel responded, “Well, I’m only a sophomore, so I don’t really know how much of an impact that makes, but I just really try to make everyone happy, you know? It can get stressful and long at times, so you just got to keep it light. You put in so much work for so many hours just to swim from anywhere between 20 seconds to 20 minutes at a meet. So, you really just got to make it worth it. So, I just try to be positive and hope that it helps other people and spreads through the team to help them get through the tough work outs.”

Everyone has their own way of staying in that positive mind set, but Erin Lengel’s strategies were very unique to her. “I count,” she said. “I really like counting. Like this morning we were doing this work out, and after the first one, I was like ‘Well, 19 more!’ And it sounds really dumb, but it actually helps it go fast.” After giving this answer, Lengel paused and giggled for a second before continuing to say, “Well, you know I am energetic, and my mind moves all over the place. So, I like thinking of break dancing penguins. Or, like yesterday, I swear the pool water tasted like spaghetti sauce, and I don’t know if I was, like, really hungry, but honestly little things like that really take your mind off of it and all of a sudden we only had two more to go.”

Lengel continues to compete at a high level. She has been swimming since she was five years old, only being joined by her sister for a short bit of that. She has been her own motivator. She takes care of her body through great work outs, lots of sleep, and good food. However, it cannot be all about swim all the time. In her free time, besides doing her school work, Lengel is dedicated to Kappa Kappa Gamma, one of the sororities on campus. She was just given a Vice President position and feels like she has begun being able to contribute a lot more to that organization.

“I also really like movies,” said Lengel. “Like Marvel movies and Disney movies. My favorite Marvel character is Spiderman, the Tom Holland one. He’s the love of my life. I just really love how he’s very enthusiastic and positive even though a lot of bad things happen to him and he still helps other people. I just really want to be like him”.

Lengel’s top three Disney movies include Tangled, Big Hero Six, and Finding Nemo, but if she were to be a Disney character, she would be Olaf because he is, as Erin puts it, “bubbly and happy like me. I just relate to him a lot.”

This scrunchie loving, Corgi named “Whinny” wanting, high spirited athlete sticks with the motto: “It is my goal every day to make someone smile or laugh. I live by this. It makes me happy to see others smile, and I want others to be happy. That is constantly on my mind… as well as break dancing penguins” said Erin Lengel.

For anyone thinking about coming to Lawrence, especially to swim, Lengel says “Absolutely do it. You will meet amazing people that will turn into your best friends. It will teach you to time manage well. As cliché as that sounds, I love my schedule and I wouldn’t want it any other way. I’ve just had a really incredible experience and it’s been so fun and cool. I wouldn’t want it any other way. It’s really time consuming, but to me it’s all worth it and I really hope that others feel the same way.”

Erin Lengel is an exemplary example of the best teammate, hard-working athlete and determined human being. She embodies the positivity and the success that everyone strives for throughout their athletic career and into real adult life. In her words, the most important thing someone can learn from Erin is that “You can be really focused and driven, but you can have a lot of fun too!

So, go out, stay determined but never forget to have fun and stay positive while you strive toward your goals.