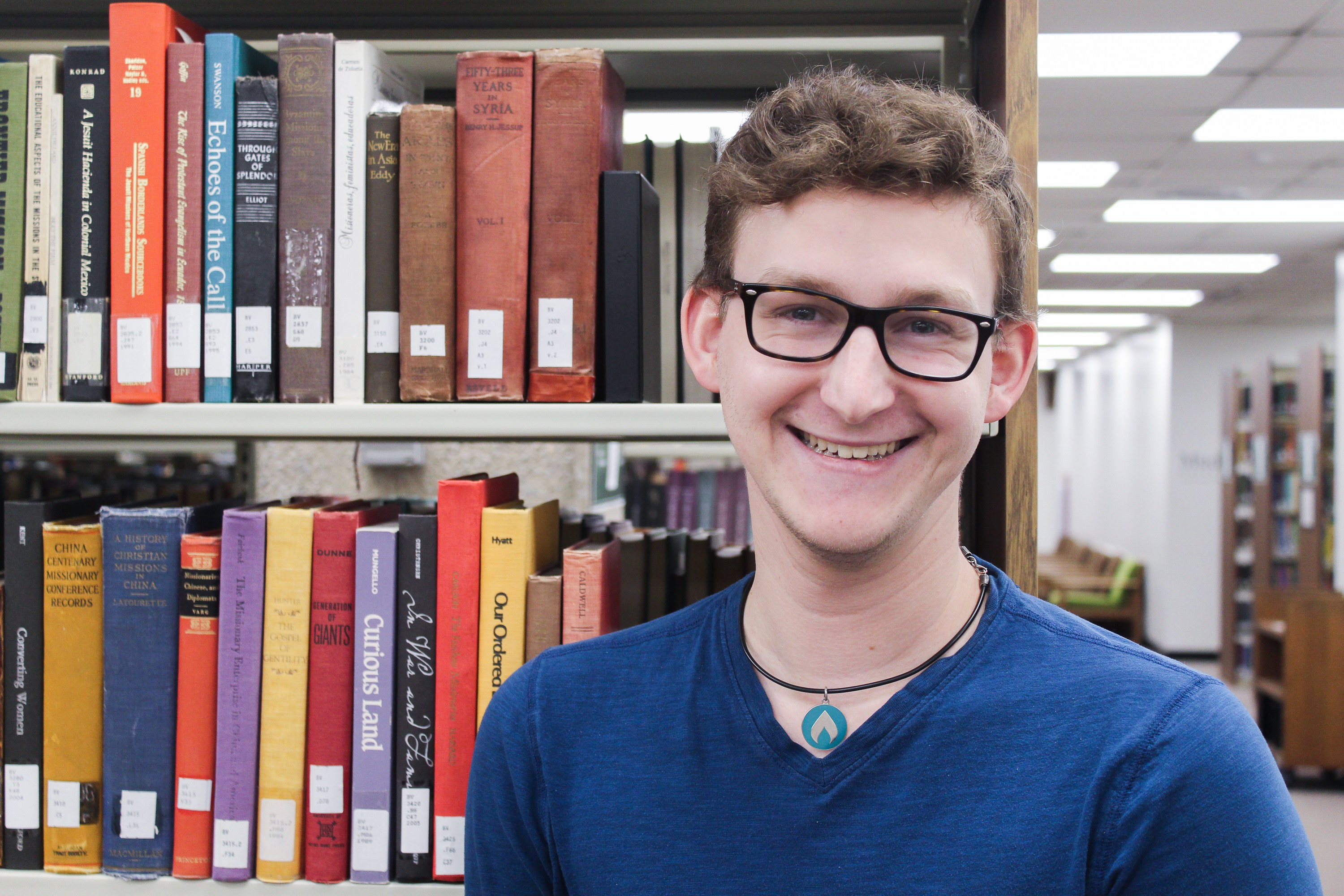 While we’ve always been told never to bring up money, politics, or religion at the dinner table, sometimes it’s these subjects that can lead to the most insightful discussions. Our perspectives on spirituality and religion are as different as the backgrounds and stories we carry with us. This column will showcase students and their relationships with faith and religion in hopes of celebrating the many ways in which we philosophically, mindfully and spiritually make sense of the world around us.

Senior Film and Religious Studies major John Newhall just finished applying to seminary school. He has wanted to go into ministry since he was ten years old. Newhall grew up attending the oldest Protestant church in America that used to be Puritan but is now the Unitarian Universalist church that Newhall calls home. Newhall comes from a historically Universalist family, and this faith has moved Newhall to continually pursue interconnections in his spiritual and academic life, all with an open mind.

Newhall’s upbringing in the Unitarian Universalist church, or UU for short, has always emphasized an adaptable approach to religion. Newhall stated, “I grew up with a very open experience with religion as a whole. My engagement with spirituality growing up has been about the ways we can see interconnection. Spirituality has been less about God and the afterlife for me and more about how to live the best life for ourselves and for other people. Unitarian Universalism is also a non-creedal faith. We don’t believe in ‘One Holy Catholic Church.’ Most of what we learn about growing up in UU church centers around the faith of other people.”

Unitarian Universalism does not necessarily set out to worship a particular god. On this note, Newhall stated, “God is complicated. There’s a significant range of people that come to church who range from atheist to agnostic to theist. In my experience, a lot of people do acknowledge a force greater than themselves, but that doesn’t necessarily manifest as something metaphysical. It could be the interconnectedness we share as humanity or nature’s relationship with humanity. The role of God is an important faith question in the UU church, but it’s considered a very individual theology rather than a collective theology.”

Not only is God a flexible figure in the UU church, but God can sometimes garner negative reactions from members of the church. Newhall stated, “Many people come to the church feeling hurt or abandoned by religion. I think that’s one reason why a lot of UU churches have a hostile relationship with concepts like ‘God’ and other religious language.  It can be difficult to reconcile with the term ‘God,’ but a lot of UU churches do use religious language like that informally and formally. I see the term ‘god’ used in the church in a very broad context. It can be useful to think about the interconnection of all things and the energy that exists as God.”

Newhall’s open-minded approach to religion has always been magnified by how Unitarian Universalism utilizes sacred texts. Newhall explained this as he stated, “UU historically comes out of Christian traditions, but what we believe is usually not as important as how we interact with the world. We have two living documents. The first is our six sources of faith, which encompasses where we draw our spirituality. They include Pagan texts, Abrahamic texts and texts from all sorts of prophetic people throughout history. The second document is our seven principles. They describe how we should go about living in the world. We should respect the interdependent web of existence, and the inherent worth and dignity of people.”

Despite Unitarian Universalism’s fluid doctrine, Newhall stressed that you cannot just believe anything you want. He stated, “There is theology in the UU church, but it’s broad enough and to be reinterpreted in many ways. To some extent, this means you can believe a wide range of things. But you can’t just believe anything you want. That’s a massive misconception. For example, you can’t be a UU Nazi, that doesn’t work. But we do believe that we’re a living tradition, we’re learning, growing and changing with each new generation and even with each new month.”

Newhall’s relationship with ministry is longstanding. He stated, “Figuring out I wanted to go into seminary came in stages. When I was younger I would watch the minister and think, ‘This is a weekly acting job that I could do.’ As I got older I encountered a lot of pivotal moments that pushed me even closer to my faith and solidified my feelings. Freshmen year of high school I went on a civil rights pilgrimage and we learned about UU members who had died in Selma. This experience brought me so close to my faith that I knew I wanted to go into ministry. I feel connected to ministry because I want to help people on find their spiritual paths. I want to be able to give back to my community and to be a listening presence to those around me.”

In the last four years, Newhall’s faith-life in Appleton has only inspired him to pursue ministry more. Newhall stated, “In Appleton I go to a church with 800 congregates. It’s actually the eleventh biggest UU church in the country. I grew up in a church with 200 members, so it’s been a different experience. On top of that, the church I grew up in centered a lot more on Christian traditions than here in Appleton where a lot more congregates I meet are Atheist. Since coming to Lawrence I’ve also gotten to work with two interim-ministers and the settled minister at the church. I came into Lawrence knowing I wanted to do religious studies and then go into divinity school, so it’s been great to experience different UU churches and to form close relationships with ministers along the way.”

As Newhall prepares to graduate from Lawrence, he hopes to continually grow his faith while still being open to learning from the faith of others. Newhall summed this up as he stated, “I want faith to be about listening. It’s about going into churches or conversations expecting to learn something from them. It’s about letting what you learn inform and change the way you think, or letting it solidify and ground yourself in your understandings even more.”

If you’re interested in learning about more Lawrentians and their spiritual journeys, come and read their stories that will be on display outside Stansbury hall throughout the production of Bernstein’s Mass scheduled to be performed Feb. 14-17. This opera tells the story of religion, doubt and spiritual journeys. Make sure to come and see it.