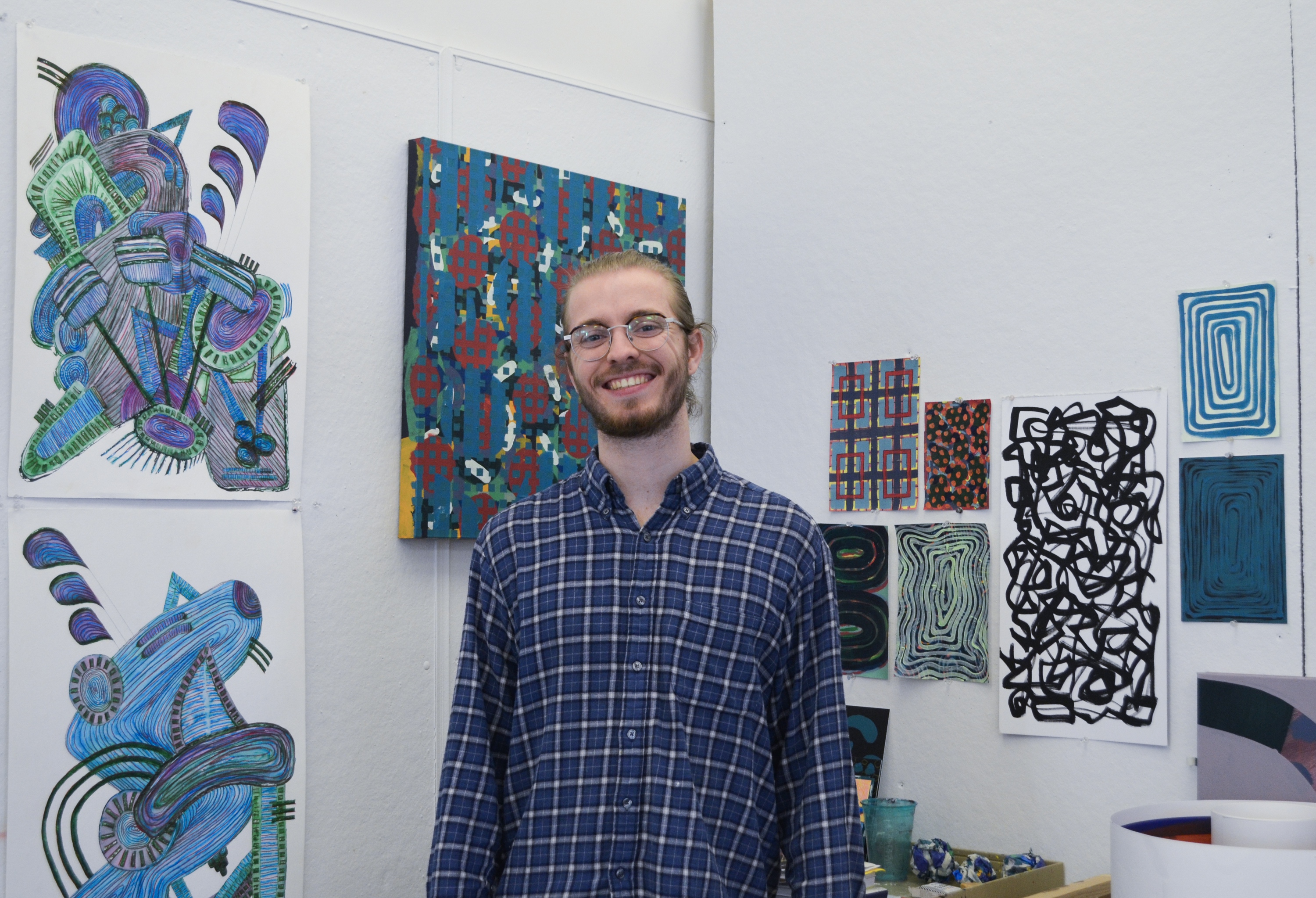 MacArthur is talking about his work as a painter and his love for the process of painting, something he fervently believes that anyone can share.

“I like to paint and it’s so fun,” MacArthur stressed. “Anyone in the world can paint. All you have to do is pick up a brush. The beauty is in the doing. I want to let the process work itself out.”

MacArthur’s works are generally large abstract pieces that play with overlapping layers and showcase a unique sense of depth and movement. His piece “Thumbprint 1” is a 60-inch by 48-inch acrylic on canvas that showcases a myriad of thumbprints layered beneath one large overarching red thumbprint, full of dizzying motion.

“I love being able to look back and see my growth,” said MacArthur, adding that his younger self could never have imagined what he’s making now. MacArthur first started drawing in elementary school where he trained his eye by copying photographs of Pokémon and dragons. He took his first art class in high school and was instantly hooked, taking every art class he could. At this point, his works mostly consisted of oil and acrylic self-portraits and, by his last year of high school, he had amassed a significant portfolio, which he submitted for the AP Art Exam.

However, in addition to this enormous passion for artmaking, MacArthur also hungered for a broad liberal arts education that would allow him to explore more than just studio art. While at Lawrence, MacArthur has pursued a variety of interests including writing, religious studies, film and music.

“I’ve been fascinated ever since I got here with how musical this campus is,” said MacArthur. “The first music I ever made was in a film class where I scored a short film I made in Logic. It was so much fun—like sonic painting. Layering things, creating textures, reworking, sampling—it’s all really similar. Also, the way music software is lined up is so visual. It was really easy for me to start working that way since I’m such a visual person.”

Despite this, MacArthur insistsed that it was not completely easy at first.

“I was terrified to start making music. It’s insanely out of my comfort zone. The electronic world versus my analog paintbrush,” laughed MacArthur.

Yet for him, the importance in his artmaking, no matter the medium or form, always comes back to the process.

“I think there is so much to be said for putting yourself into a creative mode and just letting things happen,” said MacArthur, stressing how judgment is a toxic but difficult mindset to get out of. “I’ve learned over the years to not get frustrated with what I’m making and, if I do, to just accept that frustration as part of the process. You can’t expect perfection right away.”

As an artist, MacArthur stressesd that even though expressing his voice and his artistry through his work, the process is not all about him.

“The painter creates an object that they relinquish to the world,” explained MacArthur. “They create half of the meaning, and the audience creates the other half. I think artmaking is healing and by creating work, I am giving these objects to the world leaving a bit of myself with each one. I want my voice to be fun, accessible and healing.”

You can see MacArthur’s work in his upcoming solo show on Apr. 12 at the Mudd Gallery on the third floor of the Seeley G. Mudd Library. In the meantime, you can view more of his work on his Instagram @mushybrain.