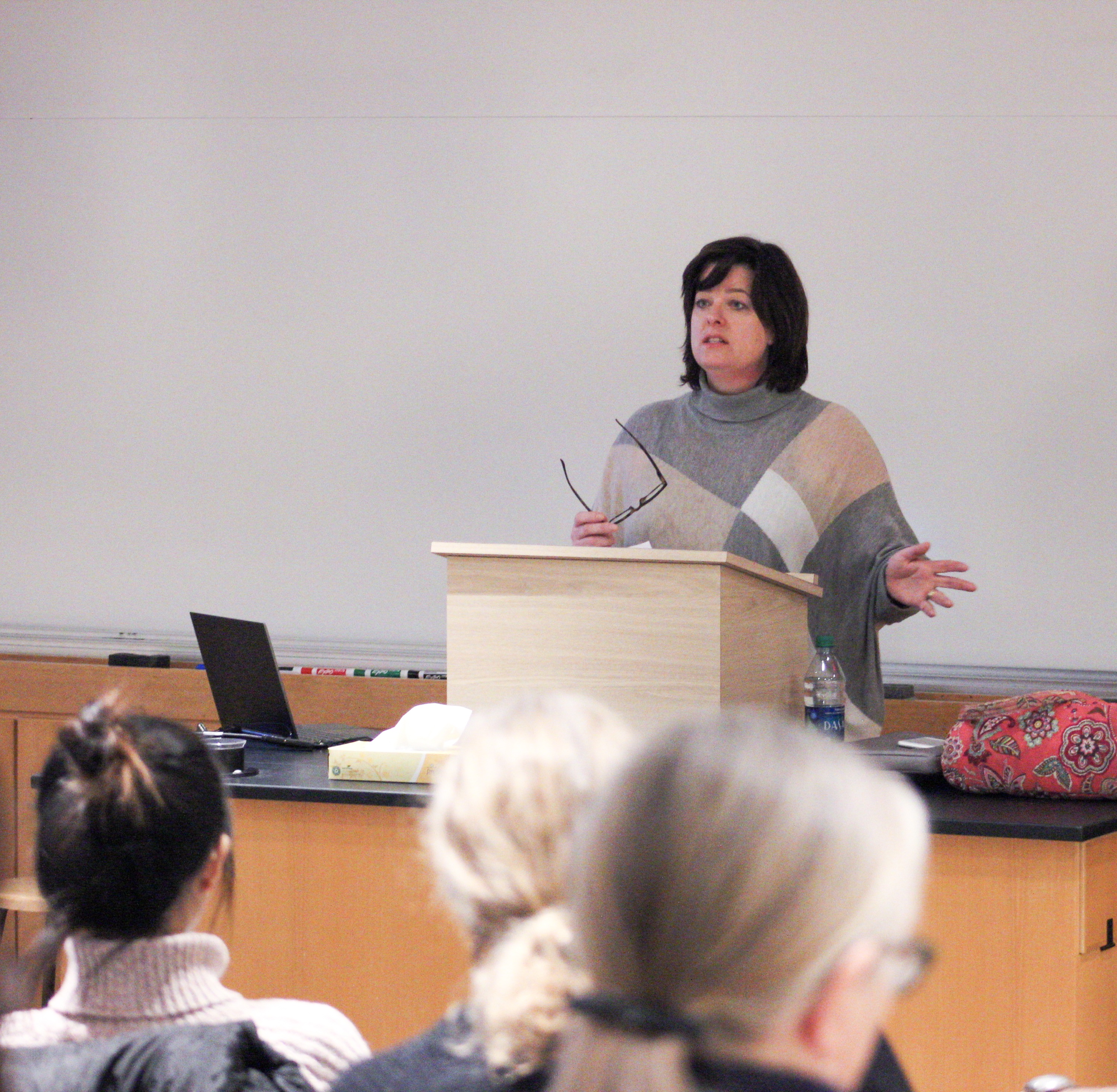 The talk was delivered in Thomas Steitz Hall of Science 102 and was well-attended by LU students and community members.

On Tuesday, Feb. 19, the Lawrence Government Department invited Barbara McCormack to give a talk about public education and propaganda.

McCormack is the Vice President of Education at the Newseum in Washington, DC. The Newseum is a museum of journalism that works to further American commitment to free press and the First Amendment.

“A matter of Trust, Countering the Corrosive Effects of Polarization and Propaganda” was the title of her presentation.

She began by showing comparisons of pictures and asking the audience to distinguish between propaganda and politics.

Then she provided the definitions of some terms. Partisanship is a personal ideology.

The gap existing between two partisanships is called polarization. Media bias is when news media starts to cater to one or the other side of the divide.

The media landscape has changed. The old one was from events and ideas to news producers or distributors and to the news consumers.

It was a linear relationship and a straightforward supply line. However, there is a new media cycle right now. It is a triangular power struggle.

The news aggregators are introduced. The news producers no longer provide news to the consumers directly, and they need to deliver news via social media sites.

This new model is not supported by economic theory because it was built upon a social platform.

It turns out to be a massive battle for the minds of the consumers.

The news media is competing for money, attention and support. The tactics are different now.

One strategy they use is to appeal to people’s partisan opinions and beliefs. “We like to be told we are right,” McCormack said.

Consumers start seeking out things they like. This media landscape is potentially contributing to the increasing polarization.

Propaganda is media that is created and disseminated specifically to influence your ideas and actions in supports of an agenda. It resembles advertising but with higher stakes. It can serve an array of ends and disguises its delivery.

The sources of propaganda are unknown. It is also important to understand that we are all susceptible.

Disinformation is false information that is created with the intent to mislead. It is one type of propaganda and it is created in order to reach a specific agenda. It is rooted in the truth to make it more believable.

Misinformation is incorrect information that lacks knowledge and causes confusion, but there is no hidden agenda.

“Polarization and media bias make it easier for propaganda to exist,” McCormack said.

Propaganda oversimplifies the debatable issues. It exploits our fears and desires, so the audience will react to it emotionally.

It also exaggerates the details and facts. Most importantly, it uses divisions that identify and enlarge the cracks in our social and political structure.

How does propaganda work? McCormack quoted Jacques Ellul’s words, “All propaganda is aimed at an enemy.”

It generalizes the objects and labels different group. Propaganda also utilizes name-calling like “crooked Hilary” in it. Caricature is also one of the strategies.

According to McCormack, we are living in this vicious cycle that creates a more-and-more divided society. The public’s trust level has decreased in the U.S.

For solutions, she does not think regulation is a good way because it can restrain the civil liberties. Instead, consumer training is critical.

She conveys that we should change from the consumer side to create critical news.

First, the consumers need to understand the role of free press in our society. Then, we need to adjust media consumption habits and strengthen media literacy skills.