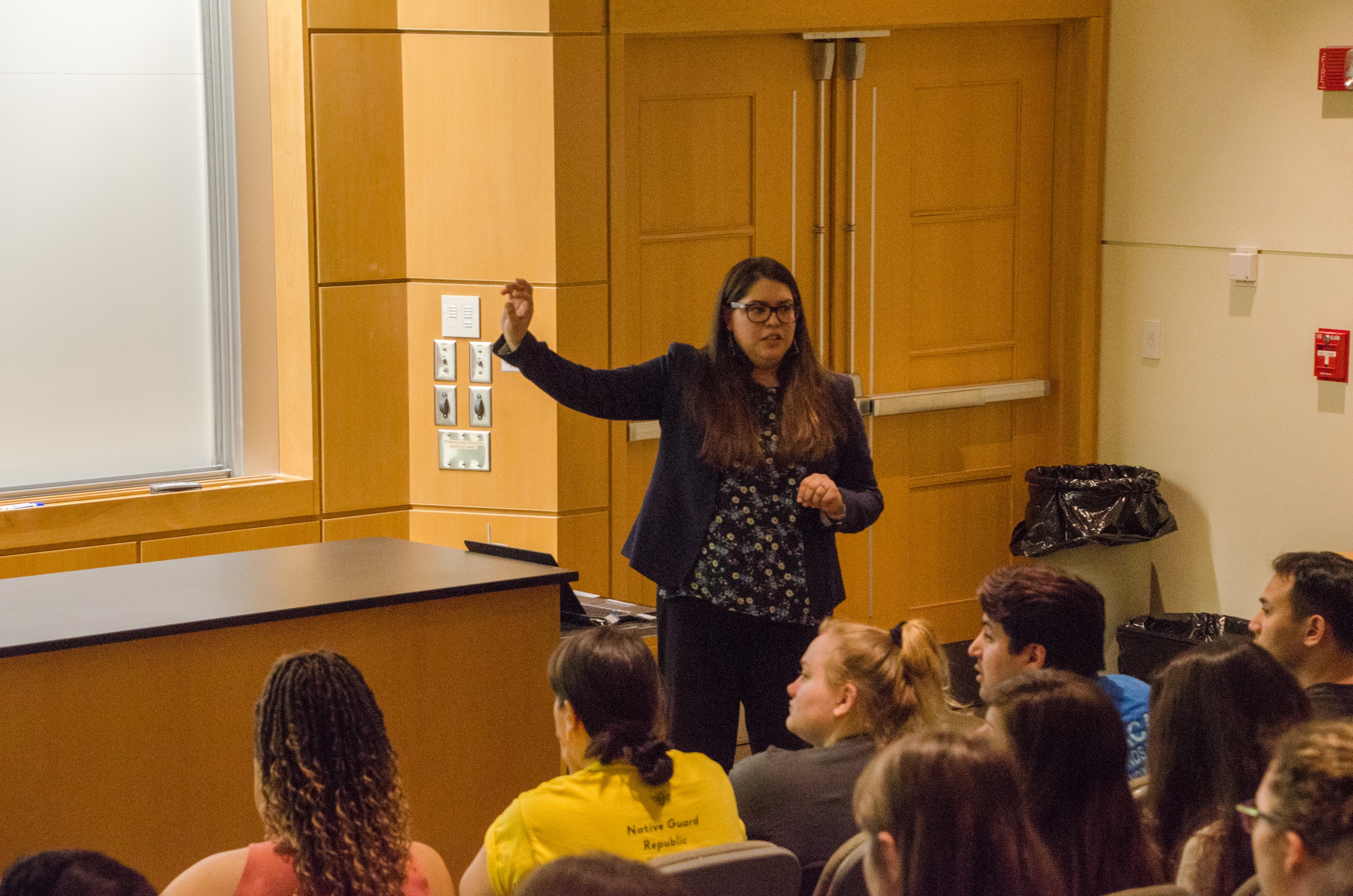 To close Lawrence University’s celebration of Earth Week, Jacklyn Bryan was invited to give a talk about her efforts to “work together to legally and technically assist in state wide collaborations that assess and address outside risks to tribes’ clean water.” Bryan’s talk was sponsored by Sustainable Lawrence and was held on Apr. 23, at 7:30 p.m. in Thomas Steitz Hall of Science Room 102.

Members of the Lawrence community as well as the public at large came to listen to Bryan, a current Equal Justice Fellow with Midwest Environmental Advocates (MEW). MEW, according to Bryan, is a “nonprofit environmental law center that works for healthy water, air, land and government for this generation and the next.” MEW also supports the belief that every citizen has the potential to make a difference.

Bryan discussed her fellowship project and how it has changed over time in response to current events. She specifically discussed Wis. Senator Thomas Tiffany and how he had used assumptions and stereotypes in the past in order to avoid consultation with Native American tribes. This inspired Bryan to emphasize the importance of communication between the state and the tribes.

Bryan also discussed previous Supreme Court rulings regarding tribal sovereignty and how these rulings still affect tribal communities today. Because tribes have sovereignty from the state, the government is not allowed to come in and regulate contamination levels on tribal land. This causes issues for tribal communities when the contamination occurs upstream, causing them to experience the negative side-effects of outside pollution without regulation.

The implications of the pollution and contamination of the land are more serious for tribal communities than others, as Bryan explained, for they are unable to simply move. If an American citizen’s land becomes depleted, they are able to relocate. If a tribal community moves, they lose their land. Bryan then mentioned other concerns—specifically around high capacity ground water pumps—and how some damage can simply not be undone.

One member of the audience asked for some sort of hope for this bleak representation of the future, to which Bryan described Wis. Governor Tony Evers and his administration. According to Bryan, “There’s a lot of momentum towards real change” with this new administration.

Bryan explained that one of the best ways to be an ally to tribal communities is to listen to the State of the Tribes Address, which contains tribal concerns. Evers, as well as nearly everyone in his administration, was at the address this year. Former Wisconsin Governor Scott Walker never attended one of the addresses during his eight years as governor.

When one audience member asked what we should be contacting our representatives about, Bryan rephrased the question to involve the tribes instead. She reminded the audience that “tribal populations have inherent knowledge” that can help. Bryan declared that many of our problems stem from this lack of communication between the government and tribal communities.

This communication is sparse for many reasons, but one in particular is related to pure logistics. Many of Wisconsin’s tribal communities reside in northern Wis.—far away from Madison where the decisions are actually being made. Representation matters, according to Bryan, and utilizing stereotypes and assumed knowledge about a group of people does not equal representation.