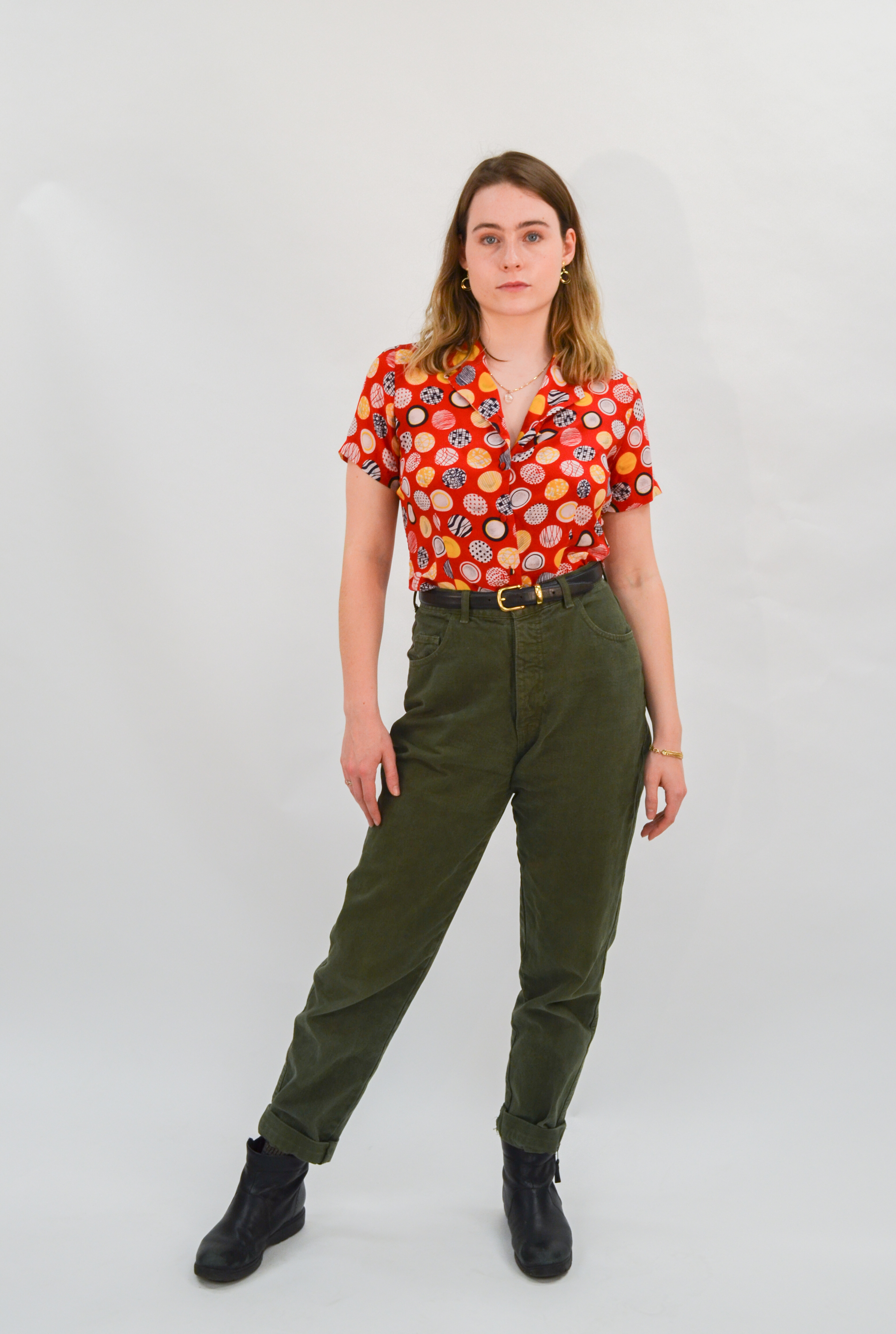 Senior Jen Nelson wearing a pair of her sturdy and stylish pants.

I have always been interested in fashion as a type of wearable art. I believe there is so much room for creativity every day when a person decides how to decorate their body. At an early age I became involved with sewing and thus formed my fascination with textiles and personal style. Since then, I’ve been intrigued by the many different ways that people represent themselves through the way they dress. I write this column in hopes of highlighting Lawrentians with unique senses of style and diving deeper into the philosophies behind manufactured appearances.

Senior Jen Nelson likes to spend her time outside when she can and assemble collages with her roommate when she can’t. She is majoring in anthropology and hopes to snag a job post-graduation where she can be active on the job and isn’t confined to sitting at a desk all day.

Nelson describes her style as “opportunistic,” meaning she isn’t constantly splurging her savings on a multitude of random items. Rather, when she shops, she finds statement pieces that work with other pieces she already owns.

This way, she can add only a few pieces at a time, but still be able to create iconic outfits based off these statement pieces. As many avid thrifters do, she has learned to cut back on the amount of clothes she annually purchases. One way in which she justifies buying new pieces relatively frequently is by constantly cleaning out her closet and re-donating items she doesn’t wear as much anymore.

Who knows, maybe next time you hit Fox Valley Thrift Shoppe your next score will be something that once had a life in Nelson’s wardrobe. Another way avid thrifters can reduce the effect that their new purchases have on their wallets is by listing old clothes on apps like Depop.

Depop is an app for a digital clothing and accessory market where users can buy and sell items with ease. Not only is it great for getting some money back from clothes you don’t wear anymore, it’s also great for finding specific pieces without wasting a bunch of time hitting different thrift stores.

A staple style of Nelson’s is her sturdy and stylish pants. Nelson didn’t always have the appreciation she has for a good pair of pants now, however. In high school, she used to dress with the philosophy of comfort over fashion. She would regularly wear leggings and sweatshirts and the only denim pants she would wear were jeggings.

This stage in Nelson’s life is hardly reflective of her aesthetic now; it is a marker of how much her style has developed. Nelson loves to rock a pair of jeans or colored pants now. When she starts to craft an outfit, she starts by picking out a pair of pants and then finding a tight or feminine top to match it. Most of the time Nelson’s outfits are influenced by her moods or the season.

One thing that is unique to Nelson is that on a bad day she will dress up in a fancier outfit to make herself feel better. This seems to go against the grain, as most people tend to throw on sweats and a random t-shirt when they are having a downer day (and hey! There’s nothing wrong with that). This conscious choice to counteract her mood with her clothing is a good example for showing the power that one can wield through purposeful fashion.

Growing up, Nelson learned to sew and went to various sewing camps at local community colleges. There, she learned to sew decorative pillowcases and other various things. Recently, Nelson sewed an apron that she is very proud of. We stan this tactile queen. Nelson uses the sewing machine she has at home, but if you are interested in sewing while at Lawrence, check out the Makerspace in the library. There you can get trained and granted keycard access to use a regular and heavy-duty sewing machine during any hour the library is open.

One fashion standard that Nelson would obliterate if she could is the idea of “seasonal” colors and patterns. White can be worn after Labor Day, bright colors can be worn in the winter and dark colors in the summer. Fashion is timeless, and when you really understand style, no rule can hold you down.