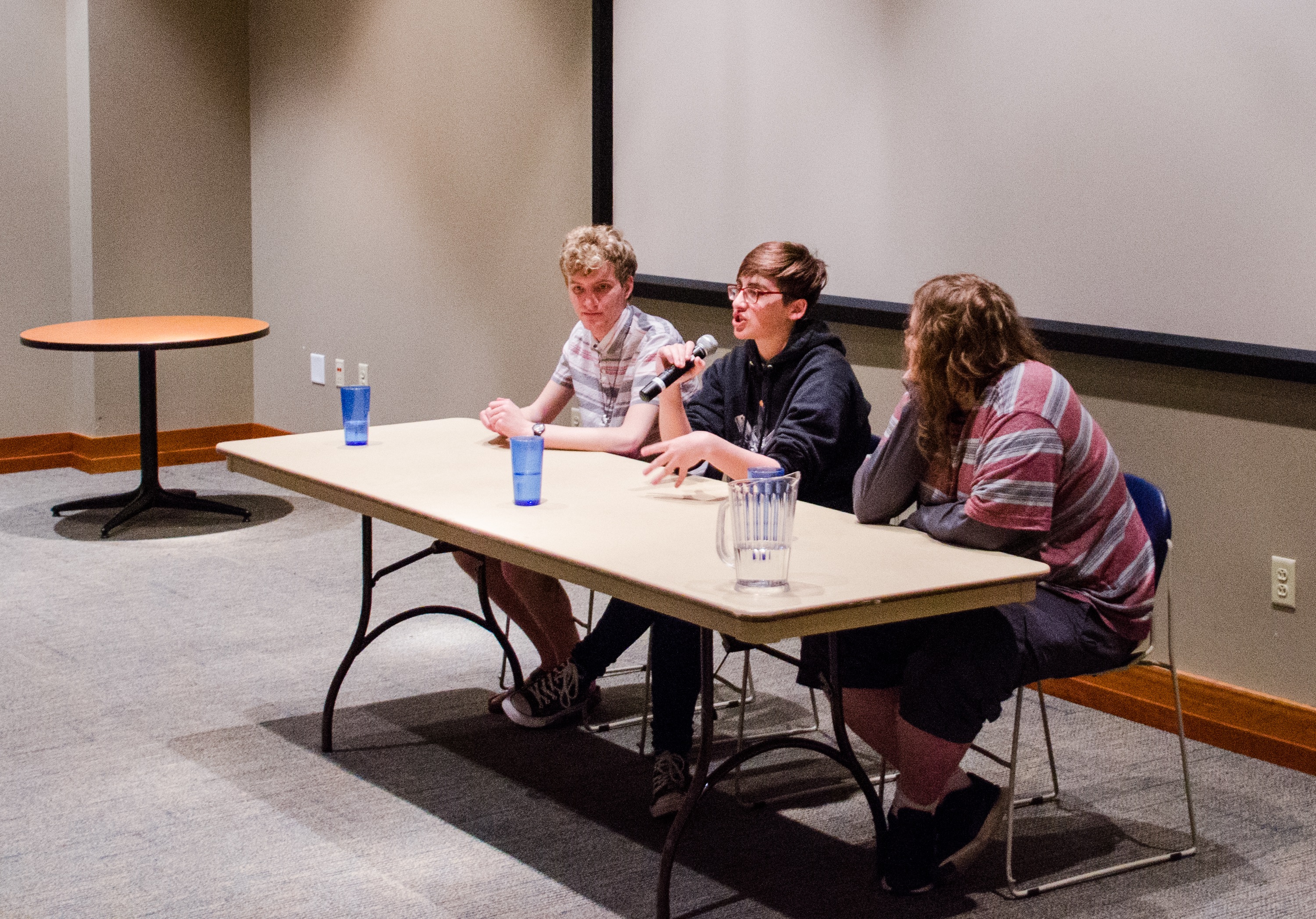 Inclusiveness was the main focus of the Women and Identities in Gaming Symposium (WIGS) hosted by Gaming Club on Sunday. The event consisted of a keynote presentation and a panel of students to discuss diversity issues in the gaming industry. Sophomore Isaiah Bourland led the festivities.

The keynote presentation was delivered in the form of a short video by independent game developer Brenda Romero who couldn’t be present at the event due to logistical issues. The video discussed Romero’s experience as a game designer/developer and the current state of the industry as it pertains to a dynamic between the industry’s “insiders”—those who work for major video game development studios such as Nintendo or Electronic Arts, and the “outsiders”—those who work as independent developers or for smaller firms. The presentation also touched on issues of what defines a game.

Romero opened her presentation with the story of feeling like an outsider during the PlayStation 4 launch event in 2013. She then went on to show examples of the kinds of problematic humor and hypocrisy she wanted to call the game industry out for. Romero pointed to the use of phrases like “What has he even done lately?” in reference to other developers as symbolic of the ways in which individuals can be made to feel irrelevant in the game industry. She then pointed out a few people who died, in many cases decades ago, and a couple who are living, who have made undeniable contributions to science and art. “Michelangelo died in 1564 and Picasso died in 1973, Orson Welles died in 1985, Georgia O’Keefe died in 1986, Gary Gygax died in 2008 and I think we all agree that they mattered and that they mattered in a big way,” she said, emphasizing that none of these individuals have made recent contributions, but that they are still considered important.

Romero then discussed the meaning of what defines a game and how those definitions impact the developers who make them. She specifically talked about board games and a series she recently did to make games that provide commentary on societal issues. One such game, called Black Box, was rejected by game development competitions because it was not what the judges considered to be a game. Some even called it more art than game, which Romero acknowledged as being a compliment.

The presentation also focused on the experience of other game developers, both those inside the largest publishers in the industry and those who work independent of that framework. What Romero found by talking to these individuals was that the outsiders wanted in and the insiders wanted out. This could be the result of a variety of reasons, but those emphasized in the presentation were that independent developers wanted access to the resources, prestige, job security and feeling of belonging that was thought to come with working for a large publisher, while those on the inside wanted the freedom to create what they choose and to work on innovative projects.

Romero’s discussion of the video game industry closed with an uplifting message to those in the gaming community who may feel like outsiders at that very moment. She pointed out that many times people who are pushing the boundaries of what games can do are made to feel this way, but they frequently are the individuals who end up changing the way we think about games and gaming. She emphasized that those individuals should keep trying and not give up. This sentiment was echoed by Reference and Learning Technologies Librarian and Assistant Professor and the faculty advisor to the Gaming Club Angela Vanden Elzen. “We should be able to hold onto that love of making games,” Vanden Elzen said during the discussion of Romero’s presentation.

Following the keynote presentation, a panel of students discussed how to define a game as well as the implications of that definition on inclusivity in the gaming community. The panel was selected from members of the Gaming Club and included senior Alec Dumas, junior Daphne Thomas and sophomore Jack McGee. The discussion was moderated by Bourland and started off with the question of why games are difficult to define. “I think games are so hard to define because, like a lot of things, they are partially defined by the most popularized traits that they might have and that is most often formed from the opinions of the dominant group,” said Thomas. The panel also pointed to the importance of characters in games being identifiable to players, but that games can serve the function of promoting empathy across different identities. “Identity is not this sort of mirror that the game is giving you and you can say, ‘That’s not me I don’t really like that. I’m not gonna play it anymore.’ It’s actually a way for you to see another image and say, ‘How can I make this more like myself? How can I identify with this?’ and the lack of diversity in games hinders that process.”

However, the panel also cautioned that diversity in characters, when done poorly, can actually do more harm than good. “In games like [Grand Theft Auto 3], a person of color, living in poverty. It is really easy to make a stereotype that they are also a drug dealer, and I’m not sure if that’s what [Rockstar Games] did or not, but you could always do that which would just be bad interpretation of the characters. It’s kind of like coming into this idea that you need to find a place where you can give backstory that’s not just misrepresenting that population,” said McGee.