“She Ventures and He Wins”—Three-hundred year old feminism 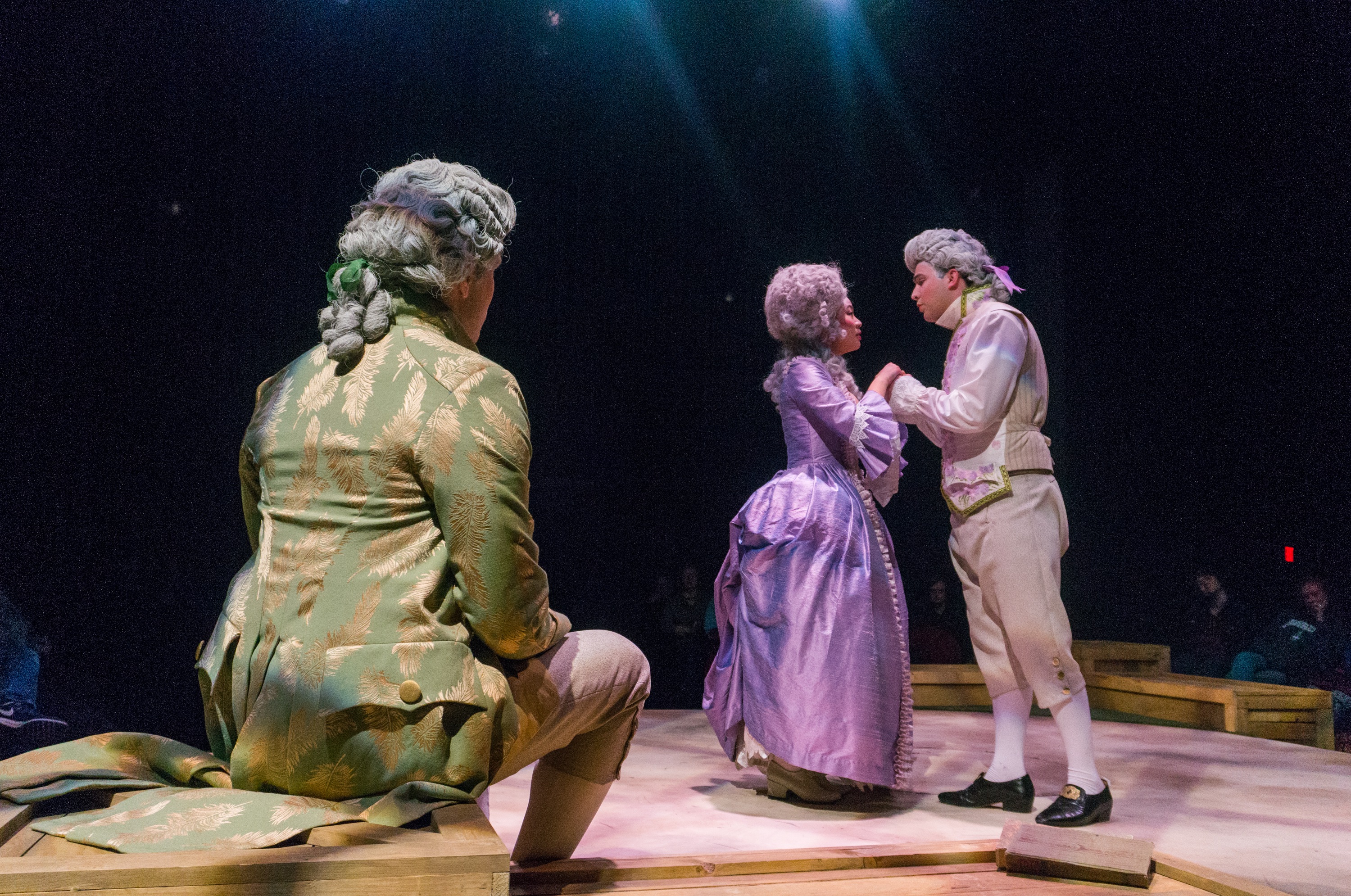 The recent LU theatre department production of “She Ventures and He Wins,” directed by the James G. and Ethel M. Barber Professor of Theatre and Drama and Associate Professor of Theatre Arts, Kathy Privatt, opened on Thursday, May 9, and ran through Saturday, May 11. Tackling the difficult themes of social and gender roles as well as class, the play was written by a woman under the pseudonym “Ariadne,” a groundbreaking act during the early 1700s when the play was written and set.

The story follows a rich heiress, Charlot Frankford, played by senior Ming Montgomery, and her cousin Juliana, played by senior Dana Cordry. They dress up as men to chase love on their own terms. The costumes, which were period-styled and stunning, were designed by Instructor of Theatre Arts and Costume Shop Supervisor Kärin Simonson Kopischke. Simonson Kopischke capitalized on the love story aspect of the play and each couple was paired by the color of their costume. The set design, by Visiting Assistant Professor of Theatre Arts Maureen Chavez-Kruger, was a platform stage in the round on the stage of Stansbury Theatre. Not only could the audience observe the action from all sides, but by putting the audience on the stage, it brought them into the story and into the theatrical gaze as well.

The performance was not only the annual spring play, but also Montgomery’s senior capstone project. Sitting down with the theatre major the day after opening, she explained the choice of play as being not only a good opportunity for the majority of the female theatre department to play roles, but also as an opportunity to bring a feminist message to classic theatre. Montgomery was especially intrigued by the fact that the play was written under a pen name, most likely by an actress. In this way, the playwright reclaimed the female voice through her pen as well as by acting onstage in this powerful love story during a time when women had little to no power in society. Having already taken a restoration comedy class with Associate Professor of English Celia Barnes, as well as having the added pull of working with Privatt, the well-regarded spring production director, making the play Montgomery’s  senior capstone seemed the obvious choice.

Montgomery, who went through the regular audition process even though it was her project, ended up winning the lead role of the young ingenue, Charlot Frankford.  In Montgomery’s words, Charlot “is a woman who knows what she wants and makes it possible because she’s so confident.” She confessed that she learned more from Charlot than any character she’s played before, and in channeling her “spunk, determination and feistiness,” she has found her own confidence as a woman in today’s society. “It’s incredible,” Montgomery noted, “how a play written over 300 years ago can be so pertinent today.”

Montgomery explained the process of learning a play written in 17th century English, emphasizing the benefit of breaking down each scene to understand the plot and text in order to get to the deeper motives of each character and the tactics they employ throughout the show. Language itself was taken slowly with lots and lots of repetition. Montgomery also stressed that Privatt’s organic directing style aided the actors in becoming familiar with the words and characters much more easily, as it allowed them to try different modes of expression and push boundaries. Acting in the round was an added challenge, and Montgomery commented on the heightened awareness of her own proximity to the audience during the performances.  She said it created a more dynamic space to play in, commenting that “nothing goes unmissed.” One tip, or “mantra” as she called it, that Privatt gave her during the rehearsal process was to speak from her back and constantly dance as her character so that her energy could continue to radiate in a 360 form. Her relationship to her own character and her scene partners changed dramatically when she utilized these tactics.

Montgomery, who has been seen in many LU theatre productions and most recently “Love and Information,” “Burial at Thebes” and “Gynt,” is looking forward to graduation and her next steps as an actress. This summer, she will be directing “You’re a Good Man Charlie Brown” at Justice Page Middle school in her hometown of Minneapolis. She’ll continue to audition there in the next year and is interested in pursuing classical theatre as well as theatre for social justice, particularly with Mu Performing Arts in St. Paul, a theatre for Asian Americans.

In wrapping up the interview and speaking to her last production at Lawrence, she commented on the moral of “She Ventures and He Wins,” saying, “It’s a play about chasing love and finding love. That’s at the core. Everyone who is deserving of it finds it.” It’s safe to say that Charlot Frankford found love by the end of all her scheming and left us with a timeless message of worthiness and female power.