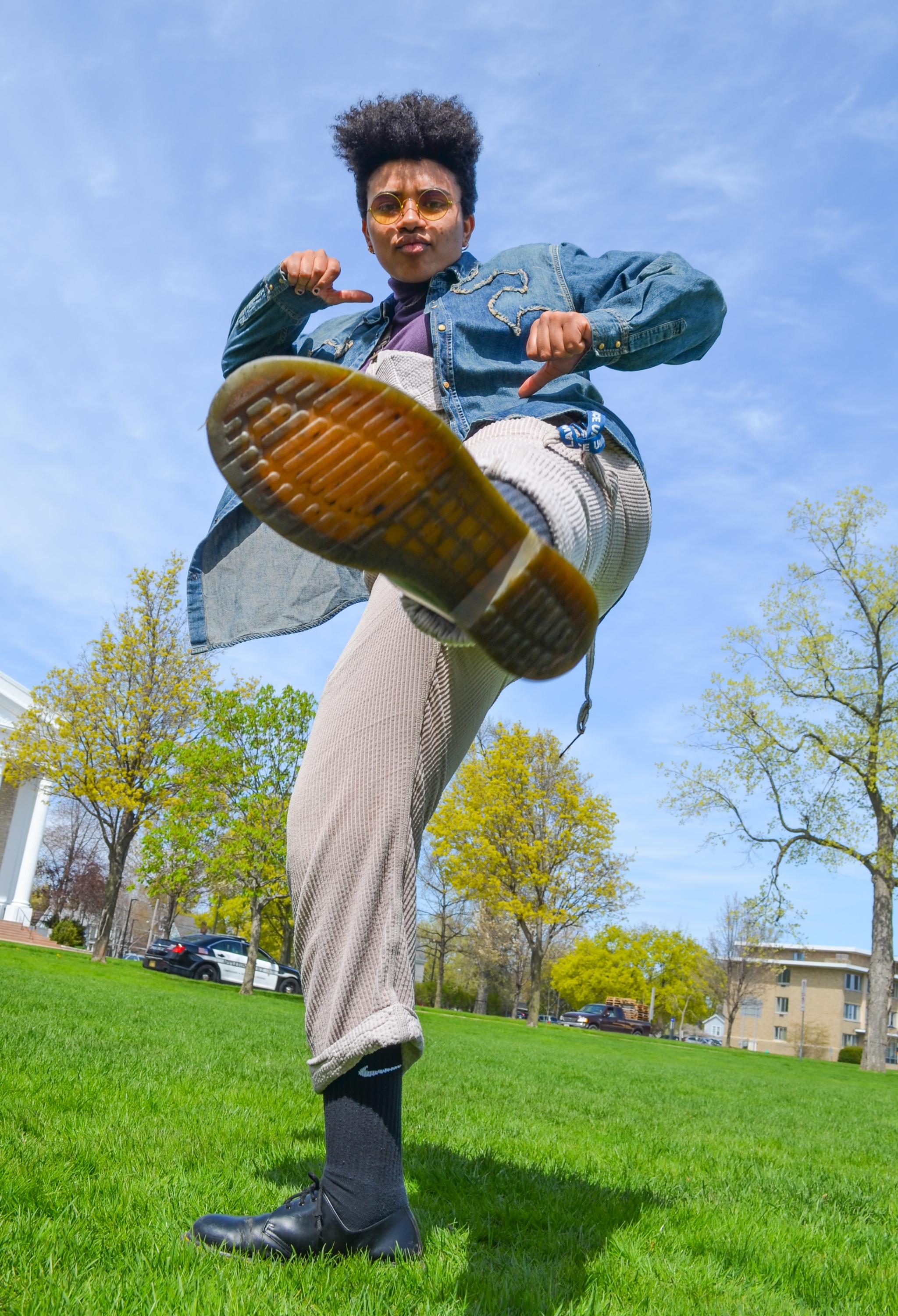 I have always been interested in fashion as a type of wearable art. I believe there is so much room for creativity every day when a person decides how to decorate their body. At an early age I became involved with sewing and thus formed my fascination with textiles and personal style. Since then I’ve been intrigued by the many different ways that people represent themselves through the way they dress themselves. I write this column in hopes of highlighting Lawrentians with unique senses of style and diving deeper into the philosophies behind manufactured appearances.

Moreau Halliburton is a freshman BMA major from Los Angeles, California who has a passion for the arts. She is a baller for the Lawrence University basketball team, where she has found something of a family with the girls on the team. One of her main passions is drumming.

When she was in fourth grade, her family got a Djembe drum and it grew to be hers. She brought it to school and recently played at “Pop the Bubble 2.0,” an off-campus collaborative music and art event at the Draw. Music is a big part of her life and she especially loves collaborating with other creators to make music that evokes emotion in her listeners.

Another way that Halliburton evokes emotion through her art is by making personalized bracelets for her friends. She found her passion for beading when she visited a beading shop in Santa Monica with a lovely community of jewelry makers who all shared a passion for creating beautiful works out of beads.

Here, she was further engrained with a love for collaboration, as the artists there would teach her new techniques and styles of jewelry making. As someone who makes and sells jewelry, I asked her if she had ever considered selling some of her work. She replied, “I’ve sold a few things but it feels wrong to turn it into a business. My sole purpose is to express my love and appreciation for someone. It does cost a lot of money and it would be nice to get something back, but that’s not my priority.”

One of Halliburton’s biggest fashion inspirations is Solange Knowles. She admires Knowles for her “flowy and wholesome” style. Something significant to Knowles’ style that Halliburton admires is how she dresses true to herself and personality. Knowles dresses in ways that highlight her aura, which Halliburton also strives to do through her personal style.

Halliburton doesn’t believe in fashion rules. One thing that particularly bugs her is saying that a person cannot match black with brown. She has only black shoes and most of her pants are brown, so she is frequently pairing the colors together.

She says that her athletic trainer hates the combination, and she never even knew this was a fashion guideline until they pointed it out. Those rules are arbitrary, so Halliburton’s response is always, “Why not?” If she decides that certain colors or textures go together in an outfit, then so they shall.

A fantasy article of clothing Halliburton wishes she had is a combination of a pair of overalls and a jacket. There are technicalities that would need to be figured out, but the concept is that it would look like two separate pieces while being attached somehow, so that both the jacket and the overalls would have to be worn together.

Don’t get it twisted; this doesn’t mean some sort of jumpsuit. It would also be rainbow and it seems magical enough that someone should create it for Halliburton.

One fashion trend that Halliburton would love to see revived is visors. Visors exist in a separate realm from other types of headwear, as they allow for the functionality of sun protection while emphasizing hair. Halliburton would prefer a revival of casual visors rather than sporty ones and specifically mentioned how she would love to see denim ones with patches sewn on.

Halliburton would describe her style as comfortable and not traditionally feminine. In fourth grade, she went through a drastic transition when she cut off the afro she had been rocking and started sporting a close-cut natural style. This transition was significant not because of the amount of hair she  chopped off, but because the number of people who started to misgender her.

This was partially because she hung out with boys frequently and would go hoop with them. Despite this, she also encountered the ignorance of others in places like the bathroom, where as a child she would be told to get out when women assumed she was a boy. This was difficult for her, but she eventually learned to embrace it because she couldn’t change other people’s preconceived notions of her.

She learned to not change her style for other people and that it is more important to do what she finds comfortable than to follow societal norms. This is one of the many ways in which Halliburton stands out as an individual. Her tenacity is admirable and fosters an inner glow that shines outward with her distinct style as a physical compliment to her aura.