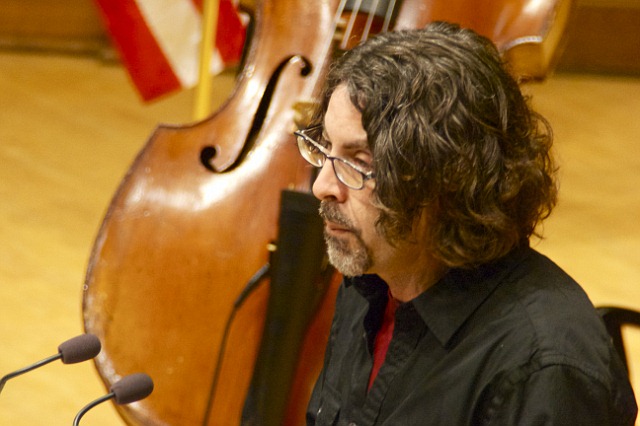 U.S. Senator Russ Feingold returned to Lawrence for two weeks this Fall Term as the Stephen Edward Scarff Distinguished Visiting Professor. On Sept. 20, Feingold delivered a lecture in Stansbury Theatre relating to his book “While America Sleeps: A Wake Up Call for the Post-9/11 Era.” The speech, like the book, looked deep into the security and constitutional issues surrounding America since the Sept. 11 attacks.

Following a standing ovation from a full venue, the senator opened up the floor to questions from the audience. Many of the inquiries were related to what the general public could do to improve the relationships between the United States and other countries. He suggested that the public should attempt to “promote global citizenship by learning about and exploring the international community.”

“I thought the speech was very interesting and engaging on such a broad range of topics. I’m looking forward to having him in my classes,” said sophomore Kerstin Brolsma.

In addition to his open lecture to the entire Lawrence and Appleton community as well as another lecture given on Tuesday, Feingold has lectured in nine different classes across four different departments. These courses include an international relations class, a statistics class, and a freshman studies class. He is spent between one and three days in each class where he discussed the issues in his book and beyond.

Assistant Professor of Government Jason Brozek remarked on Feingold’s presence on campus: “We’ve been working with Senator Feingold and his staff for nearly a year on this visit, and I’m just ecstatic that it’s finally a reality.”

During his time in the U.S. Senate, he was the only senator to vote against the Patriot Act in 2001. The purpose of the Patriot Act is to “deter and punish terrorist acts in the United States and around the world, to enhance law enforcement investigation tools and other purposes.” Feingold opposed the act on the grounds that it was “not protecting the rights and freedoms of law-abiding Americans with no connection to terrorism.” He is also known for introducing the McCain-Feingold bill in 2002, which attempted to reform campaign financing in the United States.

Brozek commented on the importance of this visit for the Lawrence community: “Senator Feingold’s experience in the US Senate — especially on the Foreign Relations and Intelligence committees — during one of the most turbulent, interesting periods of international politics in recent memory is a one-of-a-kind opportunity for our students.”

Feingold was born in Janesville, Wisc.. He graduated from University of Wisconsin-Madison. Following this, he obtained a graduate degree from Magdalen College of Oxford as well as Harvard law. After being admitted to the Wisconsin state bar, he practiced law from 1979 to 1985. He served as a member of the Wisconsin State Senate from 1983 to 1993 and as a member of the United States Senate from 1993 to 2011.

This professorship was created in 1989 by the parents of Stephen Edward Scarff after his death in 1984. The professorship chair allows Lawrence to bring a person of distinction and unique global perspective to campus.