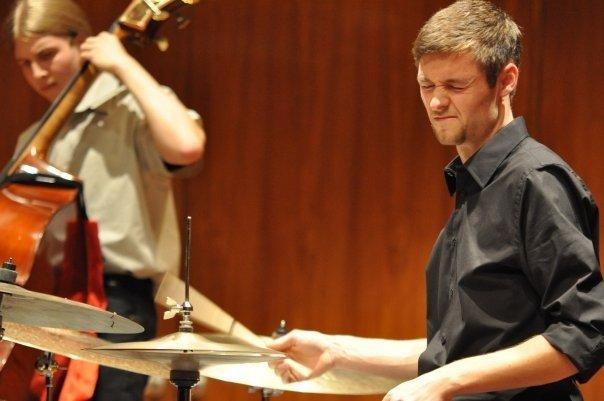 Five years at Lawrence have given Andrew Green a wide range of memorable experiences. From collaborating with a top jazz artist, to studying music in Africa, to just playing in combos with fellow Lawrentians, he certainly will head into a career in percussion with plenty of great opportunities under his belt.

But before he graduates and moves to either Minneapolis or Chicago in June, he is giving his senior recital this Saturday, Feb. 19, at 5 p.m. in Harper Hall.

Green will be playing a mix of what he called “legit pieces” and jazz. He will perform a percussion-saxophone duo with Jake Crowe and a solo piece called “The Anvil Chorus.”

This will be played on a large instrumental setup that Green had to build himself, which includes a thunder-sheet hooked up to a foot pedal. Green described the whole thing as “pretty sweet.”

“It will make you feel like you’re sitting in a forge and you can hear a bunch of blacksmiths working on iron or steel,” Green said.

Also on the program are four tunes by jazz combos. Jazz has been Green’s main focus since coming to Lawrence.

“I enjoy making music as a collective thing rather than as an individual,” he stated. “The most rewarding performances for me are ones where I interact with other people. Each voice speaks, but together is how it’s heard.”

Green explained that playing in a smaller ensemble gives him a chance to be more expressive. “Big band is more composed — in the small group you can open up and go wherever you want to as a group,” he said.

Green has played in plenty of combos and every large ensemble he could fit in at Lawrence, including the Lawrence Symphony Orchestra and the Percussion Ensemble. He has been a member of the Lawrence University Jazz Ensemble for three years, which Green said is the highlight of his time at Lawrence. He added that the Migrations concert with Bobby McFerrin was easily his favorite performance here at Lawrence.

“It’s the highlight of my life,” he said of that concert, which took place February 2010. “I’ve never known that much music that well. To be joined by such a consummate artist and connect with him onstage is pretty amazing.”

Green was quite busy this past summer. He played with a jazz band that toured Europe for two weeks to raise money to eradicate polio, and also participated in a group that traveled to Ghana for an intensive study of drum and dance.

“You’re not playing just for the music or the audience — you’re playing for dancers and singers,” Green said when asked how the drumming in Ghana differs from playing a jazz drum-set. “It’s the combination of music, dance and song that speaks on a deeper level. It’s kind of the root of all of the music we play.”

Diverse music like Ghanaian drumming was foreign to Green until he came to Lawrence.

“I think the biggest thing I’ve gotten out of the Lawrence program is exploring the influences of world music, world drumming and music from other cultures,” he said.