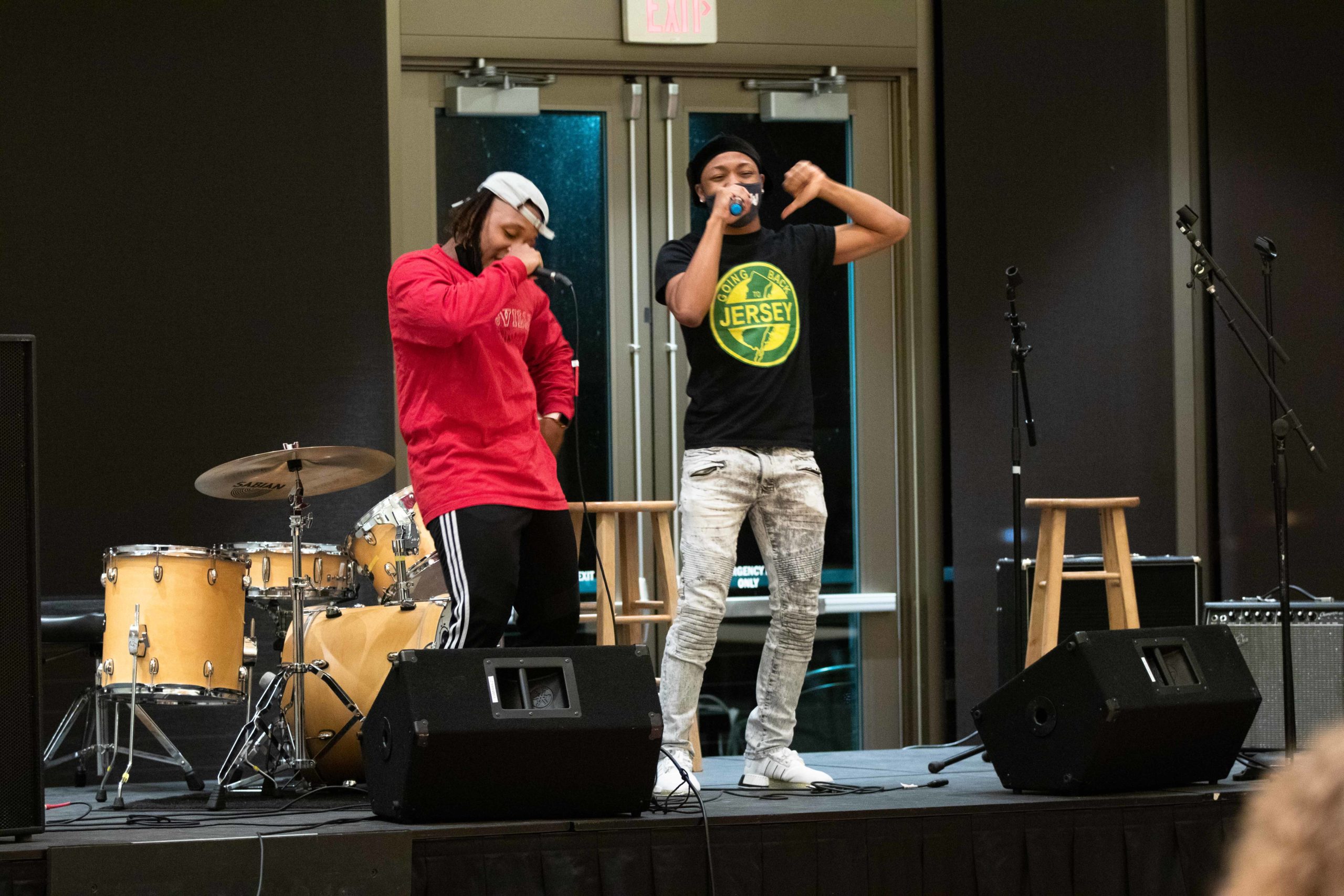 On Friday, Oct. 23, the student organization, Students of Lawrence (SOL) Studios, hosted a socially-distanced open mic night in the Somerset Toom of the Warch Campus Center. A wide array of student performers shared their talents at the event, which also was streamed on Facebook live and saved on the SOL Studios page. SOL Studios president and Lawrence senior Daniel Green introduced the acts alongside senior artist Brave Prince, also known personally as Frog. Green urged students who wanted to perform or to be involved with the organization to contact him at greend@lawrence.edu for more information.

Green and Frog cultivated a welcoming and enthusiastic environment as they introduced each performer and their work to an energetic audience. Several students introduced original work on stage, while others performed covers from favorite artists. Many of the acts blended influences from different genres, fostering the unique and creative work that defines SOL Studios and its mission. At one point, Frog spoke and rapped over freshman bassist Liam Phillips and freshman pianist Jonah Trudeau. A previous act incorporated violin by freshman Kate Stenson and acoustic guitar from first-year transfer Jando Valdez alongside their original song. Later, senior Nathan Glaser combined an original electronic melody track with a live bass accompaniment.

Undeniably, the event consolidated and showcased the wide range of talent and experimentation Lawrentians currently have in the works. Musician and freshman Xavier Yon performed part of an original song he stated would be released on his extended play coming out Nov. 13, titled “Las Ruinas,” meaning “The Ruins” in Spanish. Sophomore Tomi Oladunjoye and senior Nathan Ferguson, or “King ALX” as he goes by, each played and riffed off their own recordings they had made over months of quarantine. Other students reconfigured covers, like a sophomore pianist who performed a medley including a Frank Ocean melody or singer junior Sarah Elise Navy who stunned on Billie Eilish’s “My Future.” Glaser, another member of SOL Studios, who is artistically known as Frij, followed their electronic debut with a “jam session” with sophomore bassist Aaron Brenton and Green, who later performed an original unreleased song of his.

The audience enjoyed a rich variety of participation from many different students, fortunately including several first years. Many of the original song contributions were made by students currently in their first term at Lawrence. One freshman vocal performance major delivered a rendition of Dusty Springfield’s “Son of a Preacher Man.” Sophomore Yanni Yang, a vocalist affiliated with SOL Studios, said, “It was great to see so many freshmen represented! I’m so glad we were able to make a connection with Lawrence’s newest class even as so much of their experience here has been altered by the pandemic.”

Throughout the performances, Green passionately affirmed the purpose of SOL Studios as a supportive audience and a creative outlet, emphasizing that performers needn’t feel pressure to be perfect in order to share their craft. As a student organization that puts so much emphasis on collaboration, SOL Studios celebrates art at every stage. Green shared that SOL Studios hopes to host more open mics and similar events as long as they are permitted within campus social-distancing guidelines.

More information about SOL Studios and their upcoming projects and events can be found on their community Facebook page as well as by contacting Green. Additional resources, such as the Soundcloud link to tracks that have been recorded at SOL Studios, may also be found on Facebook.