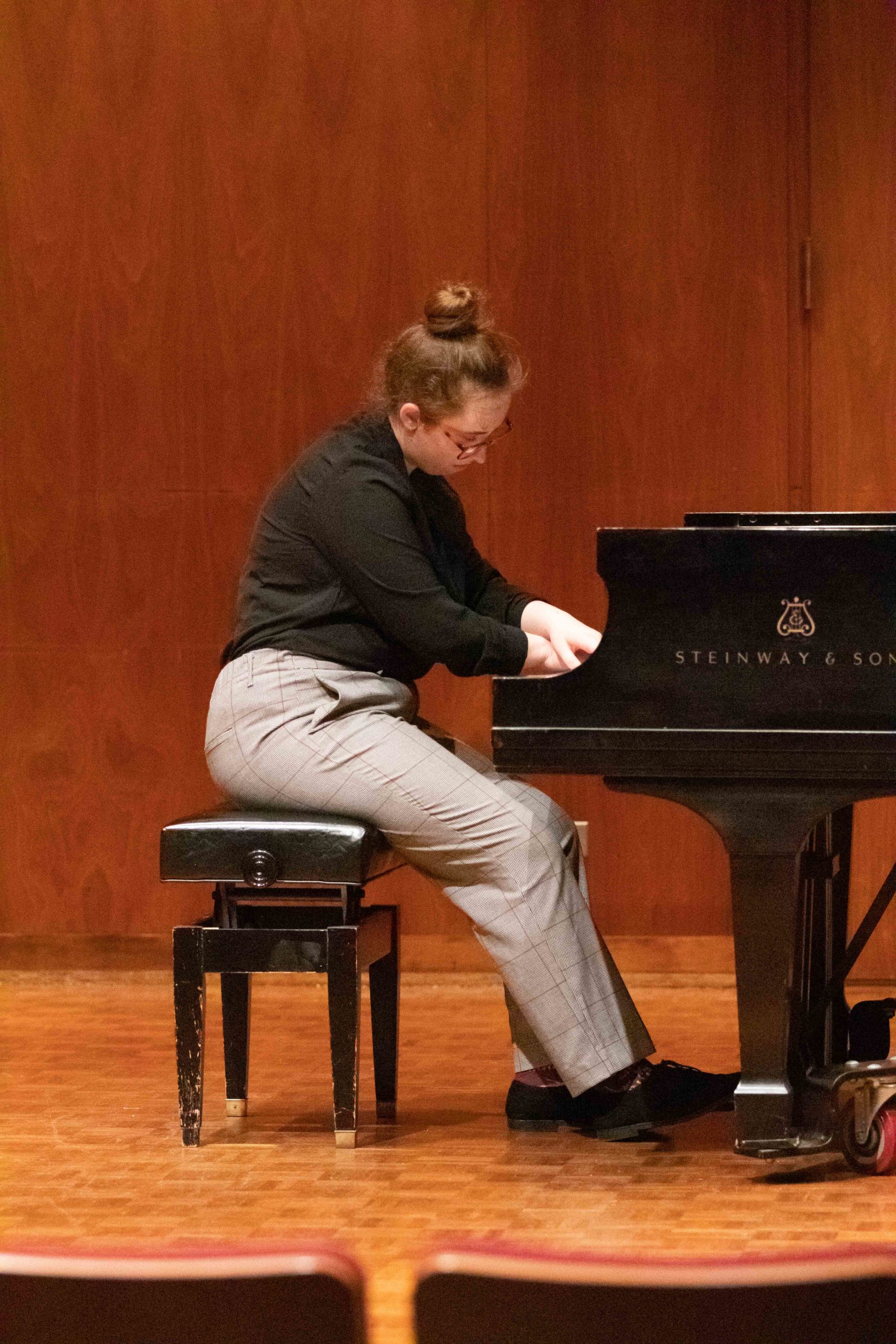 This past Monday, Nov. 9, Hannah Foote performed her junior recital for a small select audience. Though most of her performance was on piano, she started her recital with a short speech about how some may interpret her performance.

Cognizant of the times, Foote told the audience that she did not have a preference for the way anyone listening chose to enjoy the performance, whether that be live or virtually. She encouraged both listening for the artistic decisions she chose to make or listening passively as background music. Foote was aware of the current stress of the pandemic, as well as it nearing the end of Fall Term, and wanted her recital to be a welcome break.

After her short introduction on listening styles, she introduced her first song, which was a work by Bach. This composition was characterized by its cascading notes moving up and down the scale. Foote was sure to emphasize certain notes, which gave her performance a certain originality and personalness that can be hard to find in performances of classical music. The piece had an upbeat nature due to it airing on the higher side of the scale. That being said, it did not strictly stay in a high octave and made use of the entire range of notes available on the piano.

The second piece performed can best be defined by its ability to slow down as the notes got lower then subsequently speed up as the notes worked their way up the scale. The slower, low notes seemed almost as if Foote was improvising on the spot, while the faster-paced, high notes were far more melodic and defined. The combination of the fast- and slow-paced sections of this song accumulated into a gorgeous work of music that was performed flawlessly. Foote embraced the slow parts of the song and seemed to be in no rush to get through these parts of the piece that some might not have the patience for.

A notable part of Foote’s performance was a song she played in the latter half of her recital. Again, it contained slower, more reserved sections but also crescendoed into a spree of high notes. This song could also be characterized by its fast trilling of high notes during these crescendos. Not only was the trilling extremely moving, it also exemplified Foote’s technique and proficiency on the piano.

Foote’s final song showcased an enormous amount of skill on her instrument. Every key she pressed was carefully calculated. She played her way through the piece flawlessly and truly showed how capable of a musician she is.

At times, it seemed the muddled notes were an accident, but their overlapping nature only contributed to the song’s beauty. Just like some of her song’s crescendos, her performance also ended with one. Her hands moved over the piano with ease as she played her final song. Foote seemed quite content with her performance of the song, if not her entire recital.

After the completion of her final song, Foote stood up from the bench and took a bow. She was greeted with a round of applause that seemed impossible for the small audience to produce. Foote’s performance was live streamed and is available through the Lawrence Vimeo page. As she stated at the beginning of her recital, it is perfect for not only deep listening, but also a passive kind of listening, even as pleasant background noise.