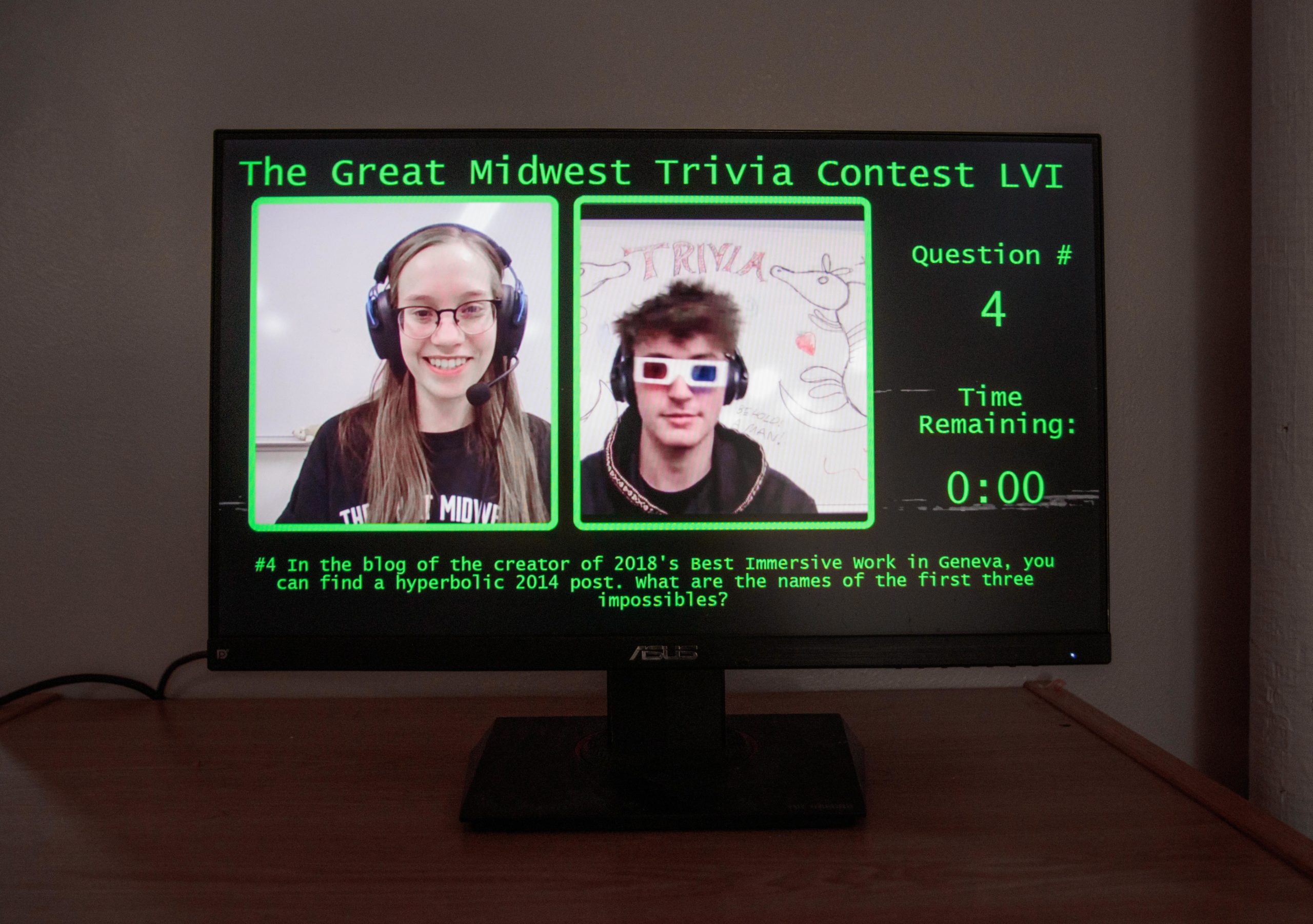 This year marked the 57th Annual Great Midwest Trivia Contest. It was held over a period of 50 hours from Friday, Jan. 29 to Sunday, Jan. 31. The competition was streamed through Twitch, and Discord was utilized for teams to communicate with each other and to answer questions.

A total of 91 teams participated in the contest. Lawrentians made up 14 of these teams, while the other 77 were made up of a variety of non-Lawrence participants. The top three student teams, in order, were as follows: (1)“At This Point, Why Not Trust an Aquarius Microwaving and Peeling — why IS [REDACTED] on FiRe — oh yes YES Flambéing and society of bones and pyromaniacs (owo) cinematic Universe™. The previous name has since burst into flames; and like a phoenix from the ashes it has risen as a Virgo,” also referred to as “Aquarius,” (2) “The Gaming House Special Featuring the Nipples of Knowledge” and (3) “Joe and Ethan fun time Bonanza team.” The winning team outside of the Lawrence community was “Deluigi.”

Trivia Masters presented players with a variety of questions in which they were encouraged to use any resources available to them, including the internet. This year’s Head Trivia Master was senior Grace Krueger, who worked in collaboration with 10 other Trivia Masters. It was the Trivia Masters’ responsibility to create questions.

According to one Trivia Master, junior Riley Seib, the questions are unlike those of a traditional trivia contest. The Trivia Masters write questions in a format similar to riddles. Then, participants are encouraged to use outside sources to aid them in answering the questions.

According to the event’s description on Twitch, teams had two options for answering questions. They could answer via a waiting room in a Discord server or by calling in to the Trivia Hotline. They were given a time limit of three minutes to answer each question and were awarded five points for correct answers.

At the end of the contest, teams had the chance to answer a series of three challenging questions known as Garrudas. Players were allowed three chances to answer each Garruda, with correct answers earning teams between 25 and 50 points. The last question asked, referred to as the Super Garruda, earned teams 100 points and was given a 20-minute time limit.

Seib prepared for the event by writing questions and learning how Twitch and Discord worked. This year, the Trivia Masters created a spreadsheet to coordinate shifts and sleep breaks between masters.

Senior Grace Foster was a member of the winning Lawrence team, Aquarius, which was comprised of 12 people. To prepare, they had a team meeting on Facebook to set up their team Discord and strategize sleep schedules.

Foster said that a total of 352 questions, including Garrudas and action questions, were asked throughout the course of the contest. Foster explained that one of her favorite parts of the contest was that it took players to weird corners of the internet.

Seniors Eliana Whitehouse and Rachel Robrecht were also members of team Aquarius. They explained that their team was in constant communication throughout the contest. They stated that the members of their team signed up for shifts and made sure there were at least three people playing at all times.

Another member of team Aquarius was junior Helen Threlkeld. She said that, although the team could not be together physically to answer this year’s questions, they spent a lot of time typing in their Discord server and communicating electronically. She felt that the community aspect and getting an excuse to spend 50 hours with her friends was one of the best parts of the contest.

Senior Ada Stelzer shared that Aquarius was awarded a piece of digital art for winning the contest. Stelzer thought that one of the best questions of this year’s contest was an action question that required teams to compose and perform a sea shanty.

“There’s nothing else [besides Trivia] that lets me get so divorced from reality,” Stelzer said. “I was worried it would be different in the pandemic, but, in some ways it felt even better because it felt like I was making something with my friends out of nothing.”