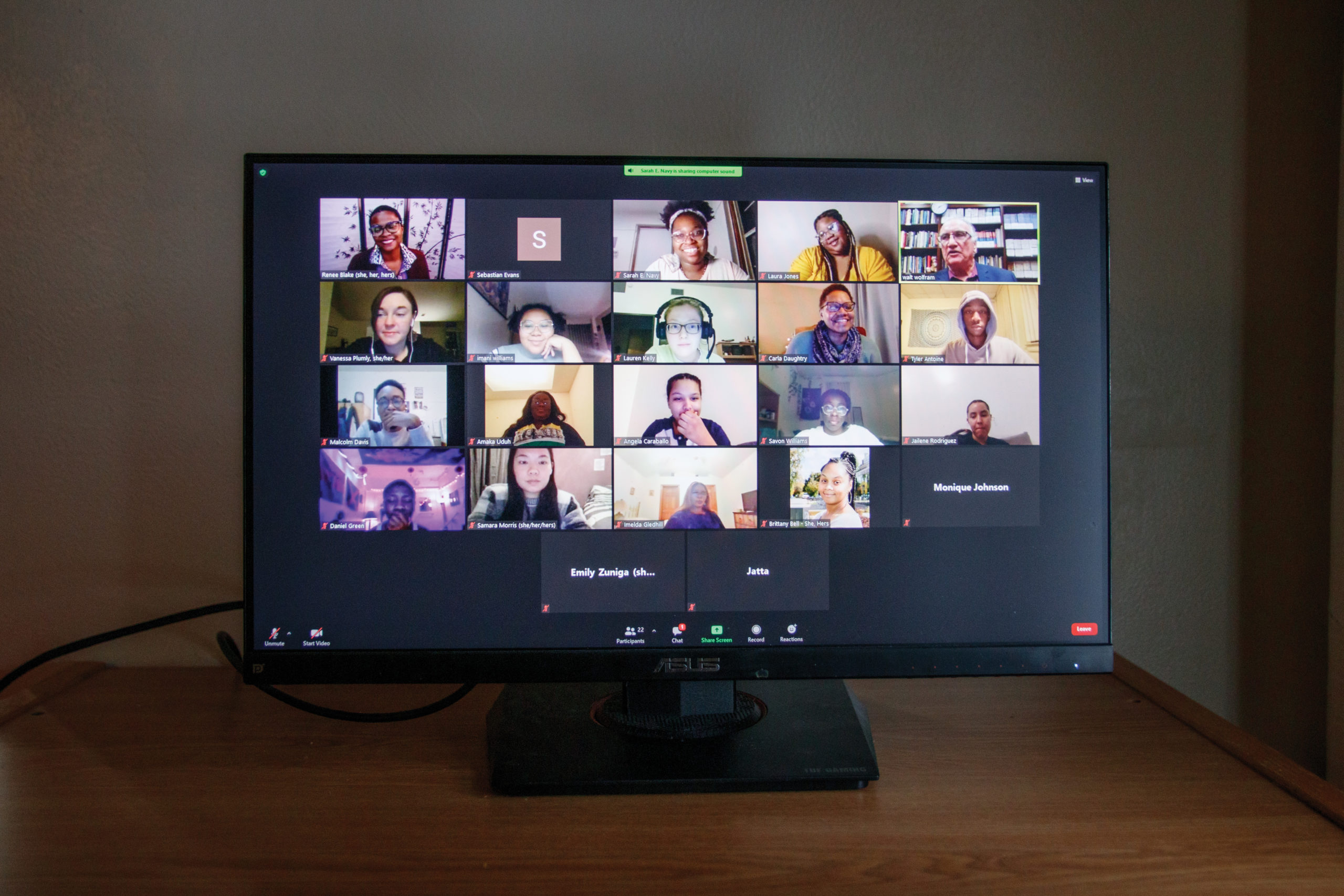 Students participate in the virtual film discussion of “Talking Black in America” on Feb. 16

This year, a week of Honoring Black History will take place from Feb. 21 – 27. Several diversity organizations led by All is One! Empowering Young Women of Color (AIO) will come together to host events featuring speakers centered around Blackness and the theme of unity.

In previous years, People of Color (POC) Empowerment Week was celebrated in the last week of February and served as a time for diversity organizations to celebrate their groups. According to Black Student Union President, junior Sarah Navy, the change in name and emphasis on Black history took place because Lawrence had limited programming for Black History Month in the past.

To sponsor these events, AIO used the funds allocated by the Lawrence University Community Council (LUCC) to pay for guest speakers that centered around the theme of unity, Coreas Soloranzo explained. AIO’s event poster describes this as a week of “understanding the intricacies of our communities and how Blackness can be centered to educate and develop relationships.”

Each day of this week will include a different speaker sponsored by each organization involved. On Feb. 21 at 5 p.m., AIO will be hosting the kick-off dinner. AIO and diversity organization members will be given priority. Then, AIO will release a form for others who wish to participate.

On Feb. 22 at 5 p.m., BYN will be bringing in Lawrence alumna Brienne Colston ‘15. She will present a talk about Brown Girl Recovery, the nonprofit she founded. Brown Girl Recovery is described as “dedicated to providing community healing sessions for women of color in the Bronx and other uptown areas in [New York City]” on the nonprofit’s Facebook page. BYN will also be organizing a cleaning supplies drive for Harbor House. According to Coreas Soloranzo, people interested in contributing can drop off hand soap, gallon bags, Ziploc bags, disinfectants and other cleaning supplies at the Diversity and Intercultural Center during the week of Feb. 22.

BSU will host Cordero Barkley on Feb. 24 at 6 p.m. to discuss “Building Generational Wealth in the Black Community.” According to UW-Green Bay News, Barkley works at Titletown Tech, an investment firm in Green Bay, as the director of finance and investments. Additionally, he was named one of Wisconsin’s most influential Black leaders by madison365.com in Dec. 2020.

On Feb. 25 at 5 p.m., PAO will be hosting Maddie Schumacher to discuss anti-Blackness in the Asian American and Pacific Islander communities. According to the League of Women Voters website, Schumacher is the Legislative and Policy Specialist for Justice Reform at the League of Women Voters. They also “spearheaded campaigns for incarcerated immigrants’ rights and protected [Asian-American Pacific Islander (AAPI)] access to the ballot” as the leader of the Organization of Chinese Americans-Asian Pacific American Advocated Policy Department.

After Schumacher’s presentation, there will be a keynote with Menominee speaker Sasanehsaeh Jennings, hosted by LUNA at 7 p.m. The University of Wisconsin System website states that Jennings is the Native American Student Success Coordinator. She also grew up on the Menominee Indian Reservation of Wisconsin and has worked as an educator for more than 11 years. Jennings has a Ph.D. from the University of Minnesota in Organizational Leadership, Policy and Development.

Next, COLORES will be sponsoring Yante Turner to discuss “Loving Radically” on Feb. 26 at 4 p.m. Ezra Marker, junior and president of COLORES, explained that Turner works with the nonprofit organization Diverse & Resilient, which is based in Milwaukee with a building in Appleton. According to their website, they “work to achieve health equity and improve safety and well-being of LGBTQ people and communities in Wisconsin” through research and outreach programs.

Marker chose Turner to speak because of his experience within the field and because he has the lived experiences of being trans and Black. Additionally, Marker felt that Turner’s discussion of loving yourself as a queer person of color was vital because it is rarely discussed. Turner’s biography on the Diverse & Resilient website states that he “serves to uplift, support and advocate for the diaspora of Black, Trans people.” Marker said that they are excited to hear Turner talk about this notion of radically loving yourself.

According to AIO secretary and sophomore Mia Del Borrello, all of these events will be open to all Lawrence students. The Zoom link for each speaker will be posted along with the virtual poster for the events.

To ensure that COVID-19 restrictions and guidelines are met, this year’s Cultural Expressions will take place entirely online. Navy said that because Lawrence is currently in the yellow zone, they wanted to make sure that the opportunity to celebrate was not taken away.

BSU has been working to produce an entirely virtual show with pre-recorded performances. This year’s submissions will be from both performing and visual arts. At this point, they are still in the process of contacting performers to submit applications to perform and send in videos. Non-white people outside the Black diaspora are also welcome to perform, Navy said.