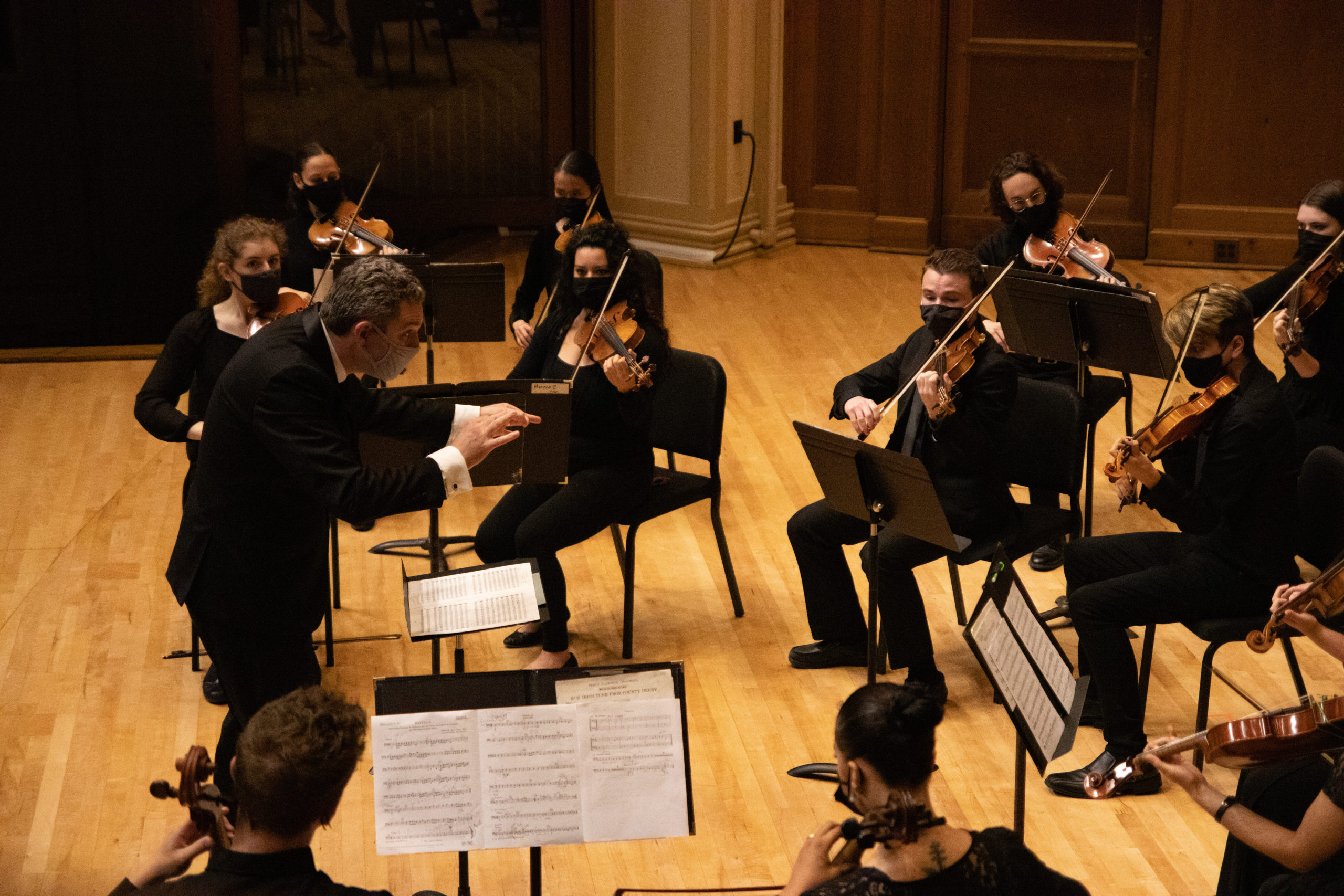 Lawrence Orchestras performed their first concert on Saturday, October 9 with an in-person audience in Memorial Chapel. Photo by Jamie Dong.

An orchestra concert at Lawrence always draws a crowd. Supporters fill the Memorial Chapel’s front rows and expansive balcony to the brim, and for every audience member in the Chapel, another two eagerly await the start of the show’s livestream in their home some hundred miles away. It’s a heartwarming scene—this gathering celebrating Lawrence’s musicians is a special hallmark of our community.

After 18 long months, the scene finally played out once more on Friday, October 8 with the first orchestra concert of the 2021-2022 season. It was bittersweet to see a massive, masked crowd pile into a hall often left empty this past year, but it meant an all-time high excitement for live performances was in the air. Fortunately, the Lawrence Orchestras delivered a program full of new surprises, old favorites and outstanding music.

The concert opened with its brightest innovation: the Lawrence Chamber Orchestra (LCO). This group, a smaller string orchestra new to Lawrence, is an extraordinary addition to Lawrence’s ensemble lineup. With a program highlighting influences from folk music tradition, three varied selections from composers Heinrich Ignaz Franz Biber, Percy Alridge Grainger and Bela Bartok were an engaging start to the night.

Beginning with Biber’s Battalia, the LCO immediately showed off their professionalism and musicianship. Navigating this piece’s widely contrasting eight movements with ease, the orchestra delivered an excellent interpretation of a work at the crossroads of folk and Baroque musical styles. The group’s deep and vibrant sound, solos from concertmaster Marissa Zintel and bassist Ryan Erdmann, and lively leadership from Director of Orchestral Studies Mark Dupere’s baton made this an exciting opener. The ensemble then offered a moving rendition of Grainger’s Irish Tune from County Derry. This famous piece was built around the traditional Irish melody commonly associated with the song “Danny Boy.” The orchestra realized this familiar ballad with subtlety and surprise: delicate phrases from the violins and violas rested over sweeping melodies from the cellos, and powerful dynamic contrast complimented a seamless stretching of tempo. Professor Dupere’s direction shined; his detailed and emotive conducting helped generate great musicality and coordination. The piece’s breathtaking ending, supported by Cole Galbraith on French horn, featured a swelling cinematic peak which left no dry eye in the house. The LCO’s program ended with Bartok’s Romanian Folk Dances, a lively closer. Each of the seven movements represented a different dance style, many with fast ornamented lines from the upper strings and thumping accompaniment from the lower voices. The whole ensemble portrayed an unmistakable passion and sense of fun throughout, cementing the group’s relevance in Lawrence’s Orchestra program.

After intermission, the Lawrence Symphony Orchestra (LSO) took the stage for their long-awaited rendition of Ludwig van Beethoven’s Symphony No. 5, a continuation of their cycle through all of Beethoven’s nine symphonies. The LSO is a true musical force at Lawrence, winning 3rd place in their division of the 2021 American Prize’s Orchestral Performance competition. Hearing the group’s reunited winds, strings and percussion warm up and tune together onstage conjured fond memories and excitement in the hall. With Beethoven’s Symphony No. 5, perhaps the most well-known classical symphony, marking their return, even more anticipation than usual filled the Chapel on this special night. In his introduction of the work, Professor Dupere acknowledged the challenges of performing such a renowned piece, contextualized its French influences, explained the connections between the famously dramatic opening theme and its triumphant “La Marseillaise”-inspired rearrangement in the fourth movement and encouraged the audience to follow and enjoy the musical journey of the work.

From their very first notes, the LSO did justice to Beethoven’s masterwork. Intricately organized interactions between the winds and strings and an intense strength of ensemble sound characterized the opening movement. Powerful horn calls bled seamlessly into singing solos from oboist Marlee Matthews and bassoonists Jessica Kleebauer and Nate Scott. The sweet second movement was marked by a gorgeous string introduction, a beautiful woodwind chorale and floating supporting lines from the trumpets (playing historical instruments) and horns. The third movement’s suspenseful march-like echoes of the opening theme and lightning-fast string passages were expertly executed. A dramatic slow-burning crescendo led into the show-stopping fourth movement. Triumphant ensemble passages complimented woodwind melodies, showy string lines and stoic declarations from the trombones, horns and Ben DePasquale on timpani. The finale rang through the hall with utter brilliance, generating an immediate standing ovation and recalling the Lawrence Orchestras’ irreplaceable role in sharing their music with the Lawrence community and the world.