A walking tour of the murals on College Avenue 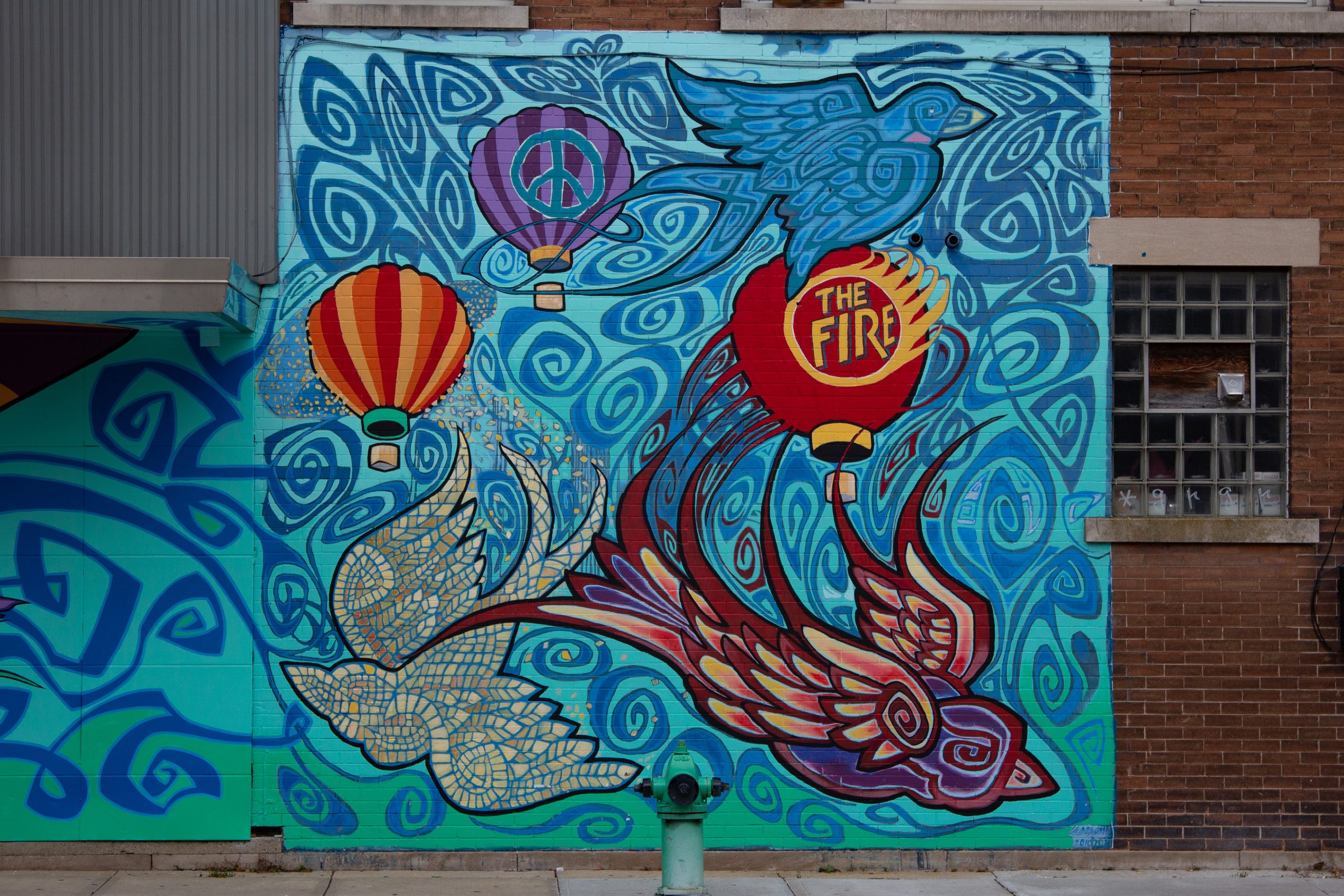 Mural displayed on The Fire’s building on the corner of College Ave and Durkee. Photo by Adam Fleischer.

From museums to exhibits and galleries, Appleton is a city known to display its appreciation of the arts. However, few often acknowledge the murals that can be found all along College Avenue in comparison to their indoor counterparts, displaying both the talent and the values the artist holds. So, I decided to spend more time with these murals, dig deeper into the mysteries that lay behind them. The fact is, there is little information available to the public, with much left up to passers to interpret. Instead, I will tell you what I noticed, and I encourage you to walk down College Avenue yourself and do the same.

Taste of Thai – My first stop did not lead me far off campus, as this building-long mural can be found very close to Brokaw. There is so much to say about what this artist did here, with colors displayed across multiple symbols, representative of many cultures. Along the right of the painting, we see what looks like a fox, wearing a blue cloak with a green scarf flying around it. The fox holds a large mask of a person’s face. On the other side, we see a person with a tiger’s tail, spikey wings, pink hair and a green crown, holding a mask of a fox’s face. Below the painting reads @WOLFDOGSONG.

Inspire Spa – My second stop made me feel like I was in a different climate altogether. Several hot air balloons were painted on top of a blue-sky landscape that looked similar to a depiction of the ocean waters. The bright contrast of the balloons as well as a few bright orange birds held a vibrant contrast to the cooler palette of the background.

J.KippaLaw – On the side of this building were the words “Liberty and Justice for All” written in a blend of light and darker blue. Below the writing are two figures spray-painting it onto the building.

Cleo’s Cocktail Lounge – This building displayed two hands with multiple blotches of color reaching out towards the sun. Coming from the hands are sparks of light flowing up the side of the building. What was interesting was the location of this painting, as there is a giant window in the middle of it that looks into the lounge. An artist by the name I. Medina @_I.M.ART signed at the bottom.

Muncheez Pizza – At this point, I turned around and walked down the other side of the street to see how many murals I had missed. It was certainly a good thing I turned around! I went towards the back of Muncheez Pizza and found an entire scene on a wall next to the employee entrance. Sticking with the theme of the building, I noticed the following from left to right: the moon is depicted as a cheese pizza, a girl sits beside it releasing the stars into the sky, an entire building is attacked by winged pizza slices and evil bunny rabbits, a cow is abducted by an alien with the initials NS next to it and a pitcher of milk is poured into the sky by four children. The very bottom right of the painting is signed in what looks like “Artist 2016,” although admittedly it was a bit tricky to read.

Stateview – Right next to this building were the words “Mile of Music” displayed in blue outline and a rainbow pattern going down the letters. It reminded me of one of those signs you would find in the home décor section of a hobby store, except that I couldn’t find anything like it when I went later that day.

Acoca and the Makaroff School of Ballet – A series of four frames were put together and nailed to the side of this building. Its lighter color scale of yellows, greens, blues and purples stand out beautifully against the brick red wall. The sign reads “Vote” and is found directly between Acoca and the Makaroff School of Ballet, who have their own artistic elements implemented along the building, as well.

Copper Rock – I don’t know how many times I’ve been to this place, and yet I had never noticed the landscape painting along its side. Each of the individual bricks were painted to depict a mountainous scene, with a combination of white, purple, green and red. The best part about this painting is that Copper Rock placed seating right next to it, encouraging customers to appreciate the view.