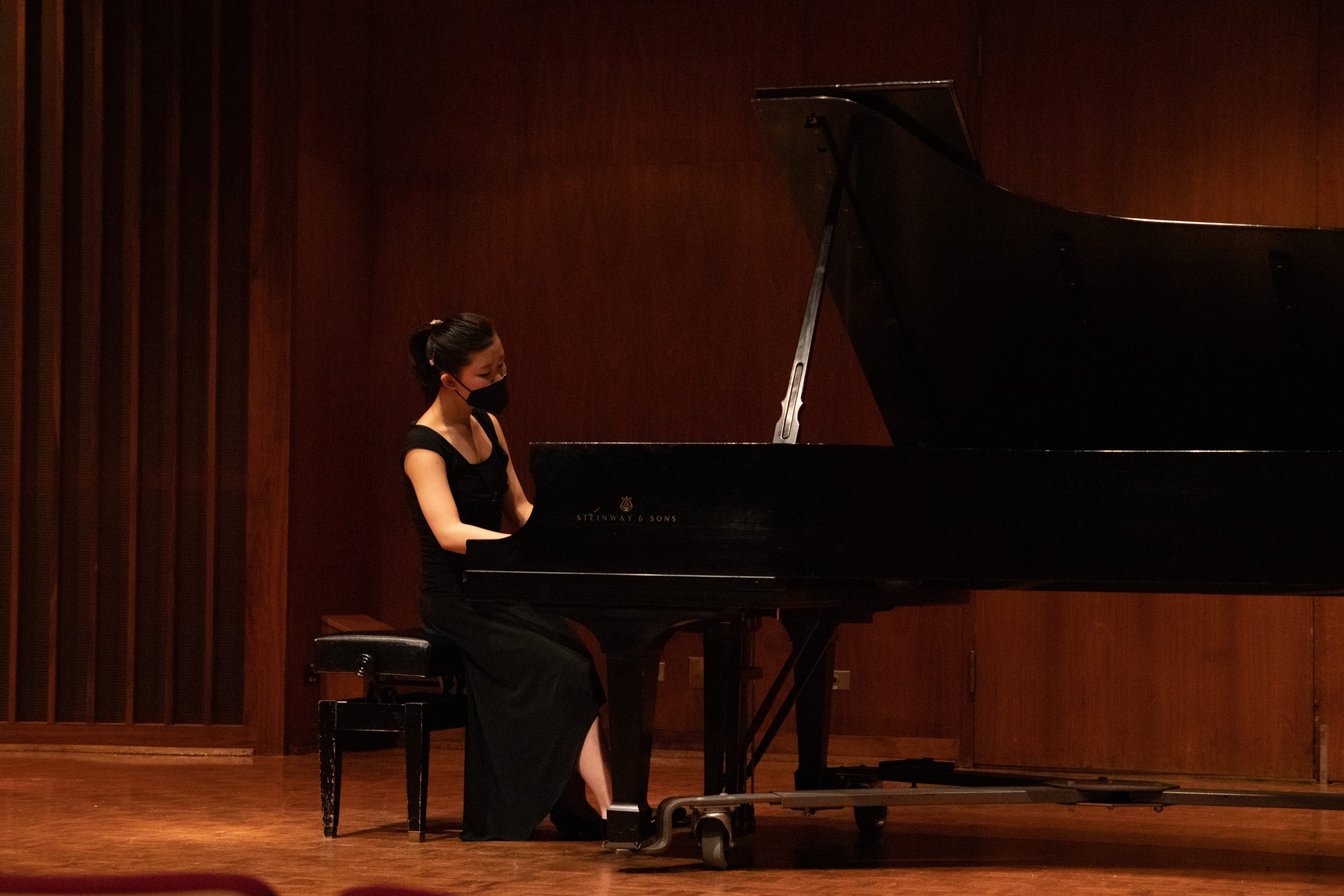 Junior Ami Hatori began her recital on Saturday, April 16 by announcing the piece she would be playing: Piano Sonata no. 1, op. 11 by Robert Schumann, in four movements. She proceeded to thank her friends, family and teacher, George and Marjorie Olsen Chandler Professor of Music Catherine Kautsky, for their support before taking her place at the piano.

Her chosen piece was dedicated by the composer to Clara Wieck, an accomplished pianist and composer in her own right, whom he would marry four years after its publication. When I met with Hatori before her recital, she explained to me the backstory of the piece. Robert and Clara were in love, but her father disapproved of their relationship and did everything he could to keep them apart. The piece was a love letter to Clara Schumann, a composer in her own right and his wife, incorporating the theme from her composition Pièces Caractéristiques op. 5, no. 4, titled “The Ghost Ballet,” throughout.

Robert Schumann also struggled with a mental illness which is now thought to have been bipolar disorder. Hatori said she understands the piece as a musical portrayal of his life, and she attributes the constantly changing character of the piece to his internal turmoil caused by his unfulfilled longing for Clara and his psychological condition.

The first movement of the sonata, titled “Introduzione”, started by creating a scene of desolation, possibly depicting Robert’s separation from Clara. When listening, I imagined a man standing alone in a wasteland, or maybe as the sole survivor on a battered ship at sea. Following this, Schumann began a singable, romantic melody, which Hatori played with a poignant tenderness. The movement then progressed into a sort of bittersweet conflict between the desolate and the tender before shifting gears completely.

In the later part of the first movement, Schumann abandoned the adagio marking of the earlier parts and opted for the opposite end of the tempo spectrum, with an allegro vivace section. The music took on a playful, dance-like quality, after which a left-hand melody gave the impression of a tenor voice singing to Clara through a flurry of excitement. Finally, the first movement concluded with a much less dense texture that recalled the sense of loneliness with which it opened.

The second movement was by far the shortest of the four. It was an innocent-sounding Aria which began with an endearing melody in the middle register of the piano. Right-hand octaves soon entered in the piano’s upper register, and the left hand then took over a similar theme in a deeper register, resulting in an exchange of high and low that could easily be interpreted as a duet between Robert and Clara. Because of how the high notes sparkled in this movement, I envisioned the higher voice as stars against the night sky of the lower voice.

The third movement was an allegrissimo Scherzo with a lento Intermezzo in the middle of it. The scherzo sections were lighthearted and seemed at turns to skip along or to waltz, though there were also a few more intimate and reflective moments. Though the intermezzo was marked lento, it had its share of faster moments, including a presto run, one of several moments during which Hatori’s ability with the pedal shone through; she allowed notes to linger and then subside with an exactitude that made them sing out without becoming muddied. The movement ended seemingly flippantly after the reappearance of the scherzo.

The final movement of Schumann’s first piano sonata encapsulated the struggle of the entire piece by alternating between hopeful and despairing characters. It began with grandiose, majestic chords that created a ceremonial atmosphere, then shifted to a lighter, daydreamy texture, and continually returned to the former. This was interrupted by a dissonant and brooding section – perhaps Robert was imagining his and Clara’s wedding when reality intruded. The piece was then consumed in frenzy before it ended with a bang and the audience burst into a standing ovation.

Hatori told me that she was glad to be able to be in the room with her audience, feeling a connection with us as she played. When asked about her perspective on performing, she said, “I just want to share this beautiful music with everyone.” It was clear that her efforts were received with gratitude and appreciation.