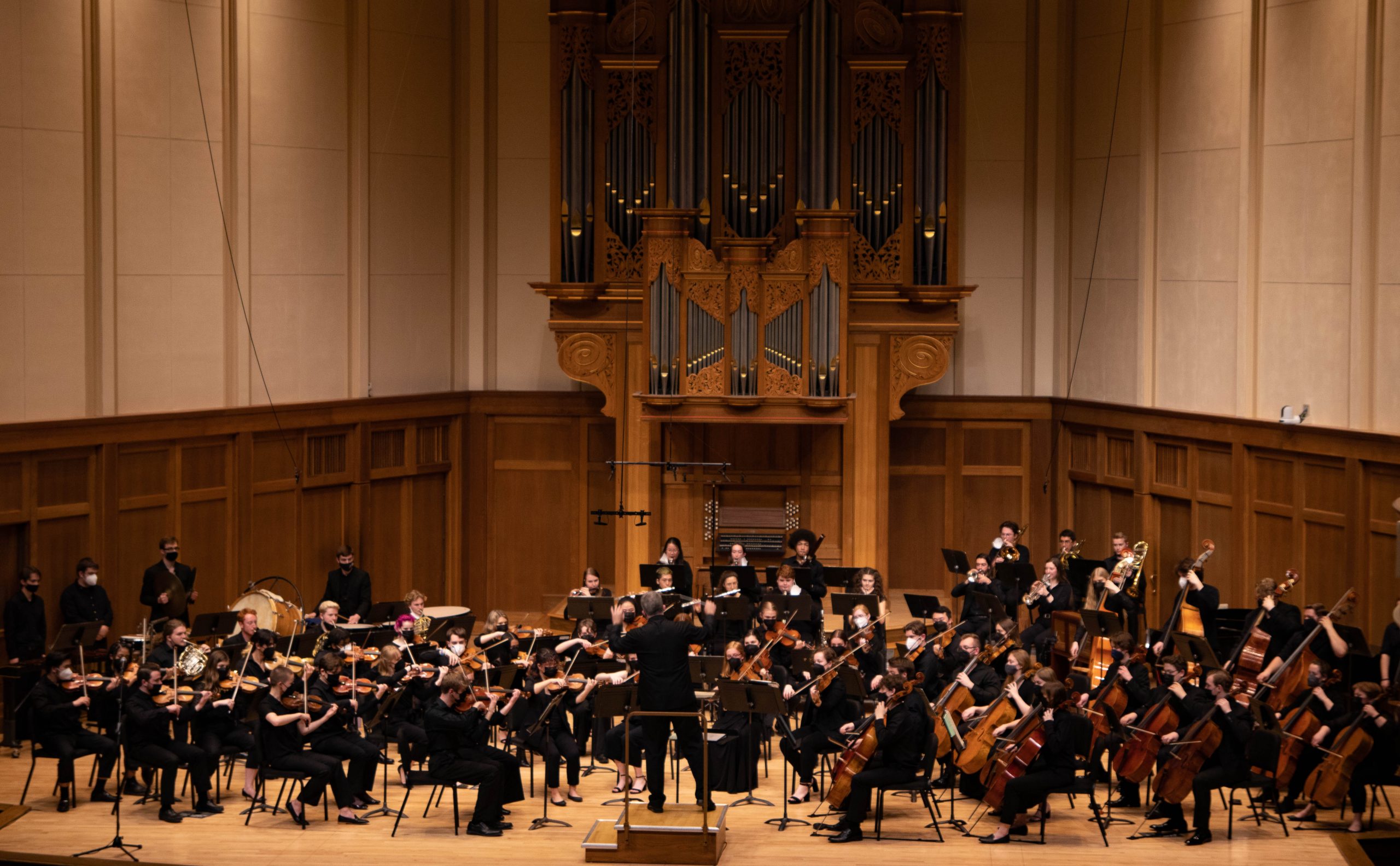 The highlights of the Lawrence Chamber and Symphony Orchestras Concert on Friday, April 22 were performances by sophomore cellist Thomas Logan and junior violinist Gabe Roethle, co-winners of the 2021-2022 Lawrence Symphony (LSO) Orchestra Concerto Competition. The orchestras were conducted by Kimberly-Clark Professor of music and Director of Bands Andrew Mast, who is filling in during Mark Dupere’s sabbatical.

In the first half of the concert, the Lawrence Chamber Orchestra performed works by José Lezcano, George Walker and Edward Elgar, ranging in mood from adventurous to dancelike to nostalgic.

After the intermission, the second half began with Tchaikovsky’s Variations on a Rococo Theme, op. 33, played by the LSO and cellist Thomas Logan. The variations were written as an homage to Mozart, and while those familiar with rococo architecture would not have been disappointed by the elaborateness of the music, Tchaikovsky himself focused on a different angle of rococo, describing it as “a carefree feeling of well-being.”

As Logan joined the LSO on stage, they were given an enthusiastic greeting of applause and cheering. The Rococo Variations opened with a peaceful introduction played by woodwinds and strings and proceeded to a mysterious and expectant-sounding French horn solo. The cello then entered with the light and charming theme upon which the seven variations were based.

The woodwinds made a reply to the theme before the cello led the way into the first variation. This variation was fairly brief and was characterized by a bouncy childlike joy. The same woodwind reply as before signaled that it was time for the second variation.

Here the cello became bolder, charging ahead fearlessly, and making virtuosic displays of ability. Interacting with the strings section, the cello seemed to taunt them or challenge them to a sort of race as it increased in speed and technicality. Like clockwork, the woodwinds indicated another transition, though not a new variation yet; the cello completely shifted moods, taking on a somber quality. When joined by the strings, they together painted an image for me of glimmers of light shining on the surface of water.

In the third variation, woodwinds and pizzicato strings created a dreamlike atmosphere around the cello. Gradually, the cello seemed to awaken and grow more adamant in its statements, receiving encouragement from the orchestra. As the accompaniment fell away, the cello sank to the bottom of its register, but as the orchestra rejoined it, the cello rose to the very top of its range, making some trills along the way.

The cello began the fourth variation with playful ease. This variation also traversed to the extremes of the cello’s range; twice, after rising to the top, the cello fell chromatically to a lower register, where its trills resembled an insect’s buzzing. Between these displays of range, the cello became dancelike. Perhaps my favorite moment in the work came at the end of this movement, where the cello made several calls to the orchestra that went unanswered. Logan made the humor of these moments clear by looking around with feigned confusion, as though expecting a response, before continuing on their own.

The cello trills that finished out the fourth variation continued into the fifth, creating a seamless transition. Here, the flutes, rather than the cello, played the theme. While they did so, the cello’s trills steadily rose in pitch, and the cello plunged alone from these heights when the flutes finished the theme. A full orchestration of the theme, without cello, followed, then an improvisatory cello passage. The flutes again took over the theme, this time accompanied by pizzicato strings. The cello concluded this variation dramatically, ending on a low, mournful note.

The sixth variation began with a touching duet between cello and clarinet that was easily another of my favorite moments in the piece, and which evoked a sense of retrospection or regret. It ended with a daringly, impossibly high cello phrase that was finished by the orchestra before the cello could reach the top.

The seventh variation was brimming with energy and contained a level of excitement and grandiosity appropriate for a grand finale. The crowd thanked Logan for their performance with a standing ovation and more cheering, and then violinist Gabe Roethle was received with equal eagerness as he entered.

Roethle played the first movement of Bartók’s Violin Concerto No. 2, which is marked allegro non troppo, accompanied by the LSO. This concerto movement could hardly have been more different from the lighthearted Rococo Variations that preceded it.

From the violin’s first entrance, the piece conveyed an eerie warning of impending doom. Bartók completed the composition in 1938, while still living in his native Hungary. He was gravely concerned about the rise of fascism in Europe and the danger of Hungary surrendering to the Nazis. Though WWII had not yet officially begun, Bartók’s music unambiguously hinted at what was to come.

At the very beginning, the orchestra, most noticeably pizzicato strings, mimicked the hum of everyday life before Roethle’s violin entered with a stark contrast in mood, like a lone dissenter or prophesier. The orchestra soon descended into rhythmic and harmonic chaos, over which the violin was still heard.

At times the violin seemed to imitate a siren, while at others it seemed fearful or uncertain. As the orchestra assumed a bleaker and more subdued texture, the violin sang out as if from the wreckage of destruction. As the violin solo rose, the full orchestra sounded out in alarm several times, and then drums entered, evoking the marching of soldiers.

The violin took on a sweet melody, contrasted by a dark and foreboding orchestral accompaniment, then started to cry out weakly, as if in grief. The violin’s solo chromatic fall was met at the bottom by an orchestral entrance that created the effect perhaps of a bomb crashing to the ground.

In trying to rise from these depths, the violin floundered repeatedly, attempting to find its way, but repeatedly found only the same dissonant chord, as if stuck. When it had freed itself, the violin took on a sense of urgency and insistence to which the orchestra joined, before the movement came to a close with everyone in unison, as though sharing a common purpose.

It is surely a testament to Roethle’s interpretive skill and that of LSO that even before I had discovered the backstory of this piece, its allusions to war were clear to me. Though the piece is deliberately unpleasant to listen to, these musicians did not shy away from the painful and distressing themes that were so crucial for Bartók in expressing his reaction to the state of Europe at the time of this composition.

The concert was concluded by LSO’s performance of Copland’s Outdoor Overture, a piece which was curiously composed in the same year as the Bartók, but which had a much brighter and more cheerful attitude.