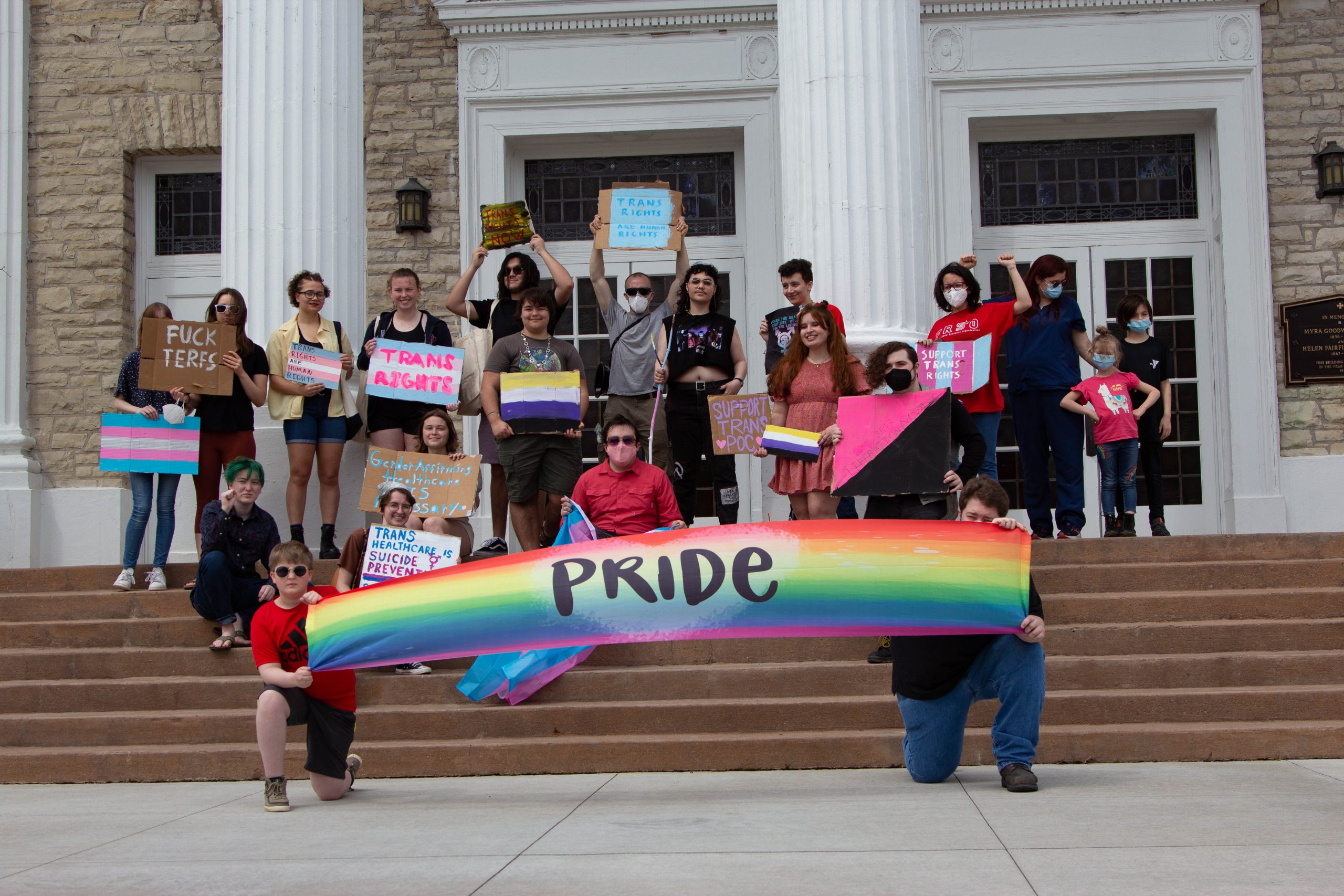 In response to the passage by state legislatures of several anti-transgender bills in recent weeks, the Lawrence University Gender, Sexuality and Diversity center in conjunction with Appleton SDS, hosted a Rally for Trans Lives on the steps of Memorial Chapel on Saturday, April 23.

Appleton City Council Member Vered Meltzer from District Two, the first openly transgender person elected to office in the state of Wisconsin, spoke to attendees. He praised the concrete actions the city of Appleton has taken to protect LGBTQ+ people since his election to the City Council in 2014, including bans on both gender identity discrimination and gay conversion therapy within city limits.

“But, at the same time, we see a lot to be worried about around the country right now,” Meltzer said.

In addition to the Florida legislature’s recent passage of the so-called ‘Don’t Say Gay’ bill, which bans the discussion of homosexuality and gender identity in K-3 classrooms, the legislatures of Iowa, Oklahoma, Arizona, Indiana and Utah recently passed bills banning transgender athletes in K-12 and college sports from competing on teams that match their gender identity.

The governor of Texas, Greg Abbot, also announced in February that parents providing gender-affirming healthcare to their minor children would be investigated by the state’s Department of Family and Protective Services for potential child abuse, although this executive action was recently halted by a court injunction.

According to the United States Public Broadcasting Service, a raft of further anti-gay legislation is sitting in legislative dockets around the country, and many more states still have anti-gay laws sitting unenforced on their books dating back to the 1980s AIDS panic or earlier.

Meltzer remained hopeful that this wave of legislation would not discourage advocates pushing for trans rights.

“We will win,” he declared. “The majority of Americans are decent people who care about equality and social justice, who want to live in a society that is free and healthy. This is a culture war, and we are winning.”

Many students on Main Hall Green who did not attend the rally as well as drivers traveling down College Avenue expressed their support. Urban was pleasantly surprised at the generally positive reception to the event, saying that participants at previous such events have been subject to harassment. Other attendees described similar past experiences.

“I came out here because I have seen and faced that [anti-trans harassment in Appleton],” said Appleton resident and rally participant Adria Jean Warren.

People from outside the LGBTQ+ community also attended the rally.

“I came out here to support my friends and people from the LGBTQ+ community,” said junior Taeen Jidaan, an SDS member. “I feel like their voices aren’t being heard and that me being there shows that they matter.”

“I feel like just talking about the bills and regurgitating information about them isn’t really as productive as hearing stories from trans people,” said Urban. “I feel like that’s a bit more humanizing.”