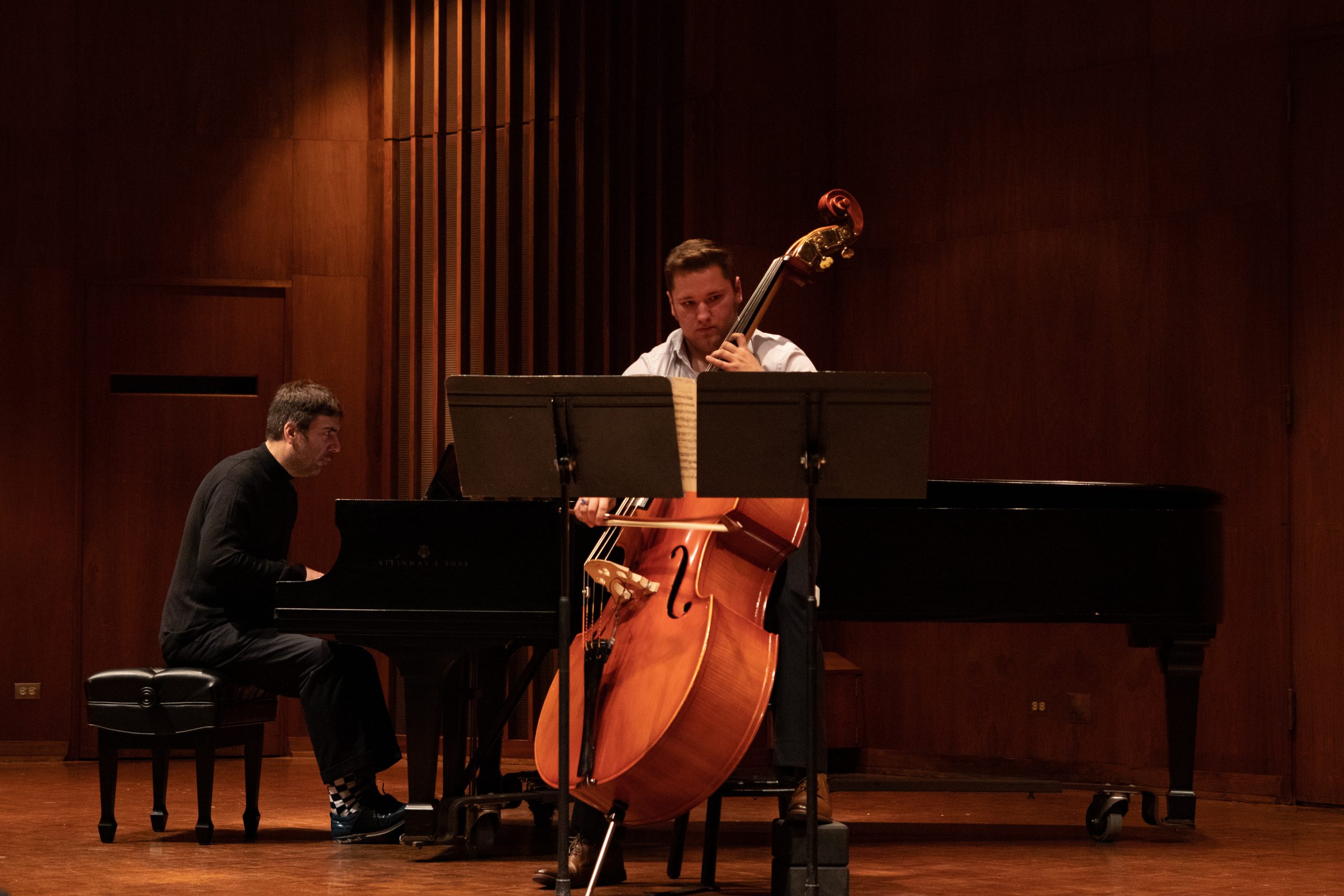 How does one describe a bass recital? Since I’m not a bassist, it would be unbecoming to show my lack of understanding. Thus, I endeavor to compare Matt Jahnke’s Bass Recital to a cooking show. Like a good host, he waited until all members of his beautiful family (who traveled from North Dakota and beyond) were ready and settled in the chairs of the recital hall before serving the first course, one called “Sonata 1963.” The recipe for this piece was written by one Frank Proto for his senior recital at the Manhattan School of Music in the early 1960s. Four items were served with this first course: “Slow and Peaceful,” “Swing,” “Molto adagio” and “Allegro energico.” As is stereotypical, chefs and musicians alike love their Italian words, and this recital certainly embodied them to them to the audience with gusto!

“Slow and Peaceful” proved tranquil and calming, despite the occasional outlandish harmony of a post-modernist composer. “Swing” felt as brisk as a fresh cup of black coffee, the curling steam rising in wafts of potency as the piano soloed over a bass drone, and then as the wind of the room redirected the steam, so the bass played a melody over the piano accompaniment. “Molto adagio” featured a particular quartal-based chord that shifted frequently but retained its original essence, much like the grilling of a steak that gets marinated, seared, seasoned and finally served in its refined form to its audience. In this performance, one saw the movements of a well-practiced chef, with smooth transitions between shelves of ingredients and cooking surfaces, in the same way that Jahnke shifted fluidly between the upper and lower regions of the neck of the base, with gestures that showcased his confident expressivity. As he moved through from the calmer to more dramatic portions of the piece, he stirred the pot of musical tension, bringing it to a rolling boil! For “Allegro energico,” Jahnke brought forth music from the depths of chaos, to beauty, and went there and back again, supremely in-sync with his accompanist Nick Towns, receiving rousing applause from family, friends and fans alike.

The next course, “Soliloquy and Reel,” featured a more recent dish with the recipe received from a fresh commission of contemporary composer Tom Mueller. Jahnke received Chandler Senior Experience funds to subsidize the commission of a bluegrass-inspired piece that “encouraged me to explore my roots” and those of his grandfather, an avid bluegrass fan. Jahnke was joined by sous chefs Evan Snoey on fiddle; Tashi Litch, mandolin; Carson Bell, guitar; and Ian Harvey, double bass. The Soliloquy featured a lush, beautiful space shared by all and featured Jahnke with a contemplative melody played with the bow. “Reel” began with a riff on Jahnke’s bass, was joined by a riffing mandolin, and later accompanied by the fiddle. The simmering of these instruments as the grill hissed was inflamed at the addition of guitar and plucked bass, a pleasing aroma of sizzling steam. As the food seared on the grill, dancing flames of melody were traded between members of the ensemble and ended abruptly with a celebration of a hearty meal ready to be devoured.

The following dish was arguably the main course, “Adagio in E minor.” It’s publicly attributed to Johann Christian Bach. Upon further research, Jahnke uncovered a secret music society of esteemed emulators who passed off their music as bona-fide Bach, with this imitation being composed by a Frenchman, Henri Casadesus. This dish, in all of its romantic glory, was beautiful, expressive, touching the soul, satisfying like a heavy chicken dumpling soup after having traveled for hours to reach family dinner at Christmastime. Jahnke’s use of vibrato in this work was expressive, yet never excessive, and the result was quite impressive.

After a brief intermission, Jahnke came to the microphone and said his broad thank-you’s, to his family, his teachers, his friends and to his Lord and Savior Jesus Christ. This set the stage in a note of gratitude as he served the last course on the menu: “Sonata in A Minor ‘Arpeggione,’” composed by Franz Schubert in the early 1800s. In this last presentation, the first movement, “Allegro moderato,” showed his assertive, poised artistry. “Adagio” sang like a lullaby, calming, dreamlike, like a good bowl of chicken-noodle soup, and “Allegretto” was more dance-like, more vibrant, like a piping-hot cup of strong tea. At the end of this dignified performance, the audience was already standing in ovation before he made it off stage.

Whether you be an aficionado of fine dining or of a masterful performance, this recital is an experience you would enjoy. If you didn’t catch it live, catch it later at this link.