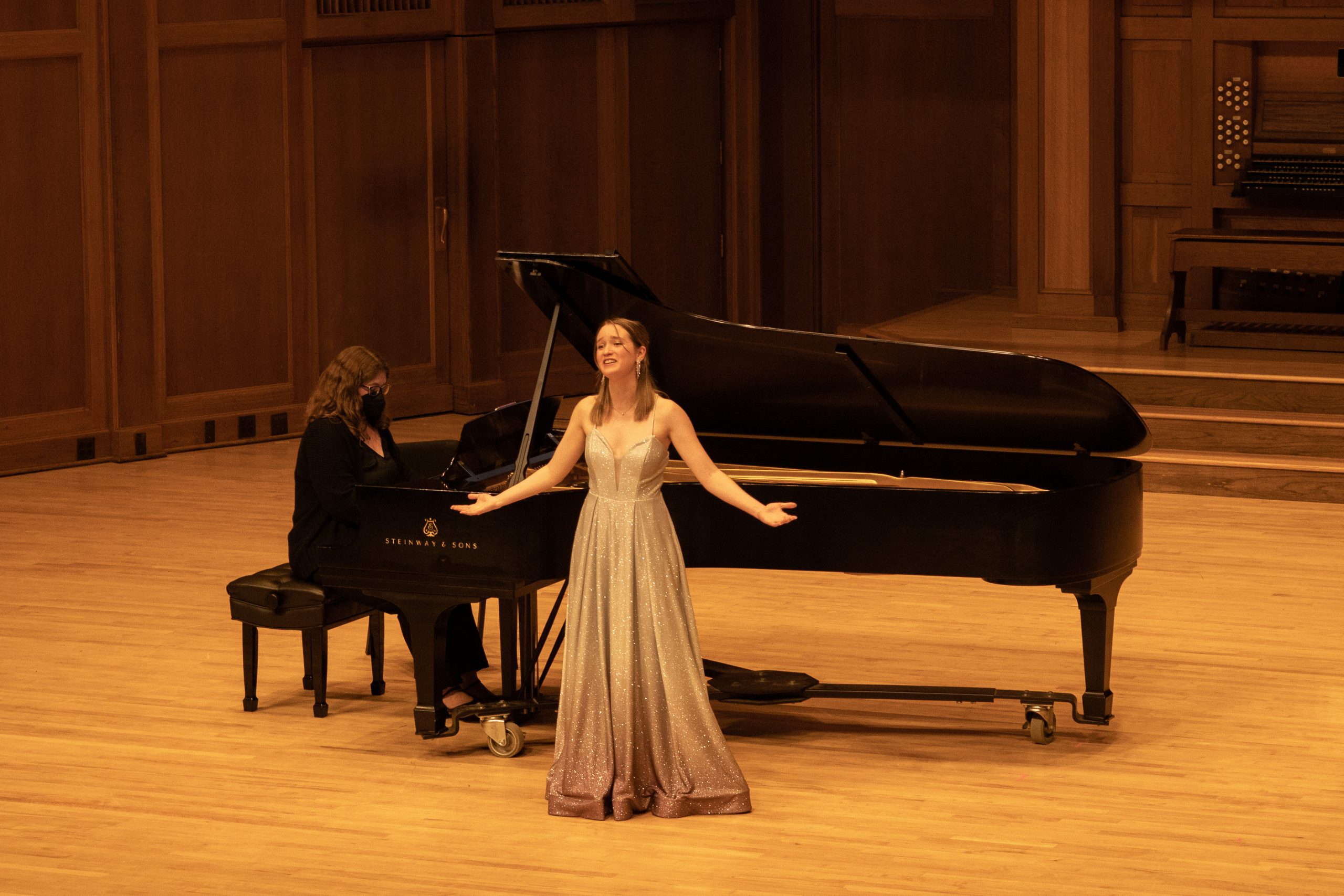 Senior soprano vocalist Marissa Lake’s recital on Sunday, May 8, titled “Between Heaven and Earth,” featured a delightful variety of art songs and operatic arias related to that theme.

When I spoke with Lake before her recital, she explained that she chose the title to represent the duality within her selection of pieces, with the art songs focusing on nature and the ethereal, while the arias explored humility and the human experience. Lake told me that she structured her program so that it would alternate between arias and art songs, showcasing the connection between these concepts.

Lake took the stage to begin her recital, accompanied by pianist junior Katie Larson. Above them, Lake’s program was projected on a large screen. As she sang, the lyrics were displayed in their original languages as well as English translations.

The title of her first piece translated to “The Aria of Madness,” from Rameau’s comic opera “Platée.” The lyrics allude to the myth of the Greek god Apollo falling in love with Daphne, a nymph who escaped from him by turning into a tree. In the context of the opera, the piece serves as a warning to the main character, a nymph, not to fall in love with the god Jupiter.

From the outset of the piano introduction, Lake was engaging and in character. The piece began with a light, energetic section that returned at the end, after a slower and darker middle section about the cruelty of love. Lake effectively brought out the contrast in moods between these sections, enabling her audience to easily follow the trajectory of the story.

Next, she performed two selections by Gabriel Fauré: “Aurora (Dawn)” and “Fleur jetée (Discarded Flower).” In “Aurora” the piano created a dreamy texture upon which Lake painted an idyllic scene of stars leaving the night sky as morning came.

“Fleur jetée” complemented this piece nicely by presenting the opposite end of the emotional spectrum with lyrics such as “like a scythed flower/love perishes” as though the dream had been shattered. Over an intense and driving piano part, Lake communicated an anguished longing for the past through her voice as well as gestures and facial expressions.

Lake then performed Handel’s “With Darkness Deep” from “Theodora.” After a sorrowful piano introduction, the vocal entrance was unaccompanied and remained exposed at various points throughout the piece, giving the character a sense of vulnerability and humanity as she emphasized her mortality by pleading for death.

Four pieces from Hugo Wolf’s “Eichendorff Lieder” followed, encompassing within them the concepts of both heaven and earth. The first piece, “Silent Love” was gentle and sweet-sounding, preceding “The Soldier,” a piece about war, in which the piano mimics the galloping of a horse.

The subsequent pieces, “The Romani Girl” and “The Lucky Knight” continue this more human theme, with a largely bleak mood in the former, and a boisterousness in the latter. Lake explained that the “Eichendorff Lieder” set starts off by establishing an ethereal setting and then “goes on to all of the earthly things going on underneath.”

After a brief break, Lake and Larson returned to the stage for their final piece together, Verdi’s “Volta la terrea (From the Earth),” a light, excited piece with plentiful staccato jumps that Lake executed with impressive precision and without compromising their playfulness.

For the final piece of her program, Lake was accompanied by an entourage of no fewer than eight cellists to perform “Bachianas Brasileiras No. 5” by Villa-Lobos. The first section featured no lyrics; Lake sang a meditative “ah” that was echoed by the cellos. In the next section, the lyrics described the evening as “a beauteous maiden” glorified by moonlight, before the piece returned to its initial melody, which Lake hummed this time.

The audience thanked Lake for her performance with cheering and a standing ovation before and after her wistful and reflective encore, “Goodbye!” by Tosti, accompanied by Larson at the piano.

This summer, Lake will be performing in “Orfeo” by Gluck with Kenosha Opera Festival and playing Susanna in Mozart’s “Marriage of Figaro” with the International Belcanto Academy in the Netherlands. Next year she will begin her Master’s of Music in Opera Performance at McGill University in Montreal. You can find more information about Lake on her website by clicking this link.