A musical welcome from Bill Carrothers and Jonathan Fagan 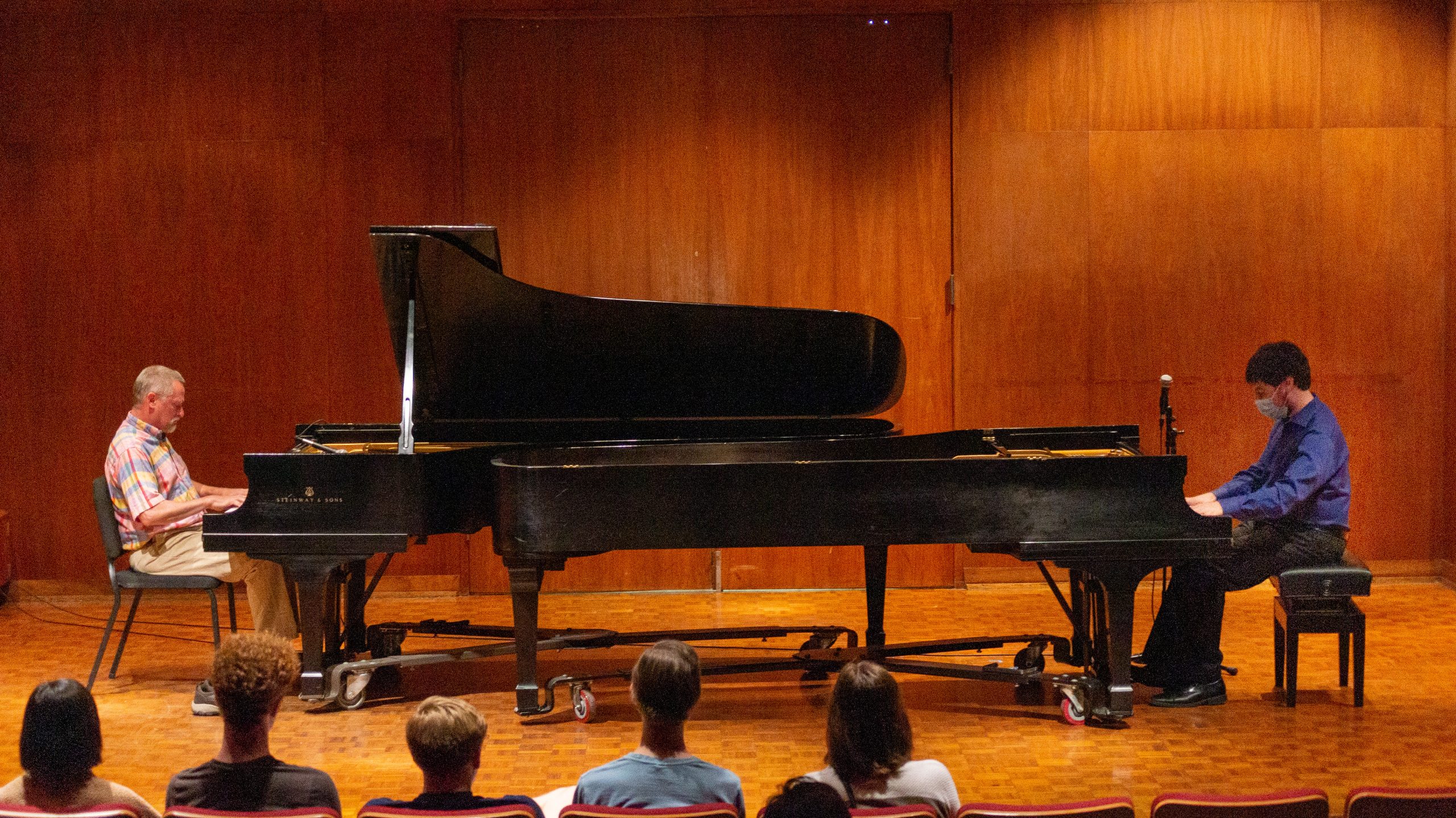 Picture this as the start to your first concert experience at Lawrence: a professor takes the stage, removes his shoes, sits at a piano and holds his hands up to his eyes, imitating binoculars, as he looks across to an alumnus at another piano and cries “Land ho!”

This is exactly how Professor Bill Carrothers and guest performer and alumnus Jonathan Fagan ‘15 began their joint performance in Harper Hall on Sep. 15, welcoming new and returning students to the beginning of the school year at Lawrence.

The duo’s first piece after this playful entrance was “The Way You Look Tonight,” a classic tune likely familiar to fans of Frank Sinatra or Rogers and Astaire movies. The piece began with Fagan rhythmically repeating a single note, followed by Carrothers joining in with an assortment of sparse but colorful chords.

Together they built up the musical texture, and Carrothers introduced the melody. The piece took off and gained a sense of freedom and energy, like a seagull flying over the ocean, making loops and dives, before settling back down as it drew to a close.

After the first piece, the musicians reminisced about their time together at Lawrence. Carrothers spoke of Fagan’s time as a student, praising his talent and emphasizing his eagerness to learn, remarking, “running your life with that level of curiosity […] takes you a long way.”

For his part, Fagan expressed his admiration for Carrothers as a jazz pianist and acknowledged Carrothers’ continuing influence on his musicianship.

The two then performed “Smada” by Billy Strayhorn. The piece began with a feeling of mysteriousness, and I imagined myself at the top of a mountain on a cloudy day, unable to see the landscape below. As they continued, the atmosphere of the piece became serene and meditative before finally vanishing into the mist.

Their third selection was a composition by Fagan called “System Check.” Carrothers began the piece with a series of chords that created a sort of grand fanfare, before launching into the dancelike rhythm of the rest of the piece. As the music came to a comically abrupt end, the audience burst into laughter and applause.

Another of Fagan’s compositions, “Empty Visions,” followed. It began with a tender, nostalgic solo by Fagan and maintained these emotions as Carrothers joined in, their choices of harmony making the piece bittersweet, like a person reflecting sadly on the hopefulness of their childhood aspirations.

Then came “Trees,” a composition by Carrothers which, as he explained, originated as an improvisation. The piece was slow and expressive. Carrothers’ playing was focused in the center of the piano’s range, making the piece seem grounded, while Fagan accentuated with higher chords, which I visualized as blue sky visible through an opening in the leafy canopy high above.

The final piece of the concert was “Istanbul,” by Nat Simon, which was lively and boisterous, if a bit chaotic at times. It was clear from the musicians’ faces that they were thrilled to be playing together again and sharing their fun with an audience.

Fagan and Carrothers’ performance was a lovely first concert of the school year. It highlighted the closeness and supportiveness of relationships between faculty and students that continue even past graduation. It also gave a vibrant sampling of the broad range of emotions that jazz can express, all while creating an inviting atmosphere for everyone in attendance.