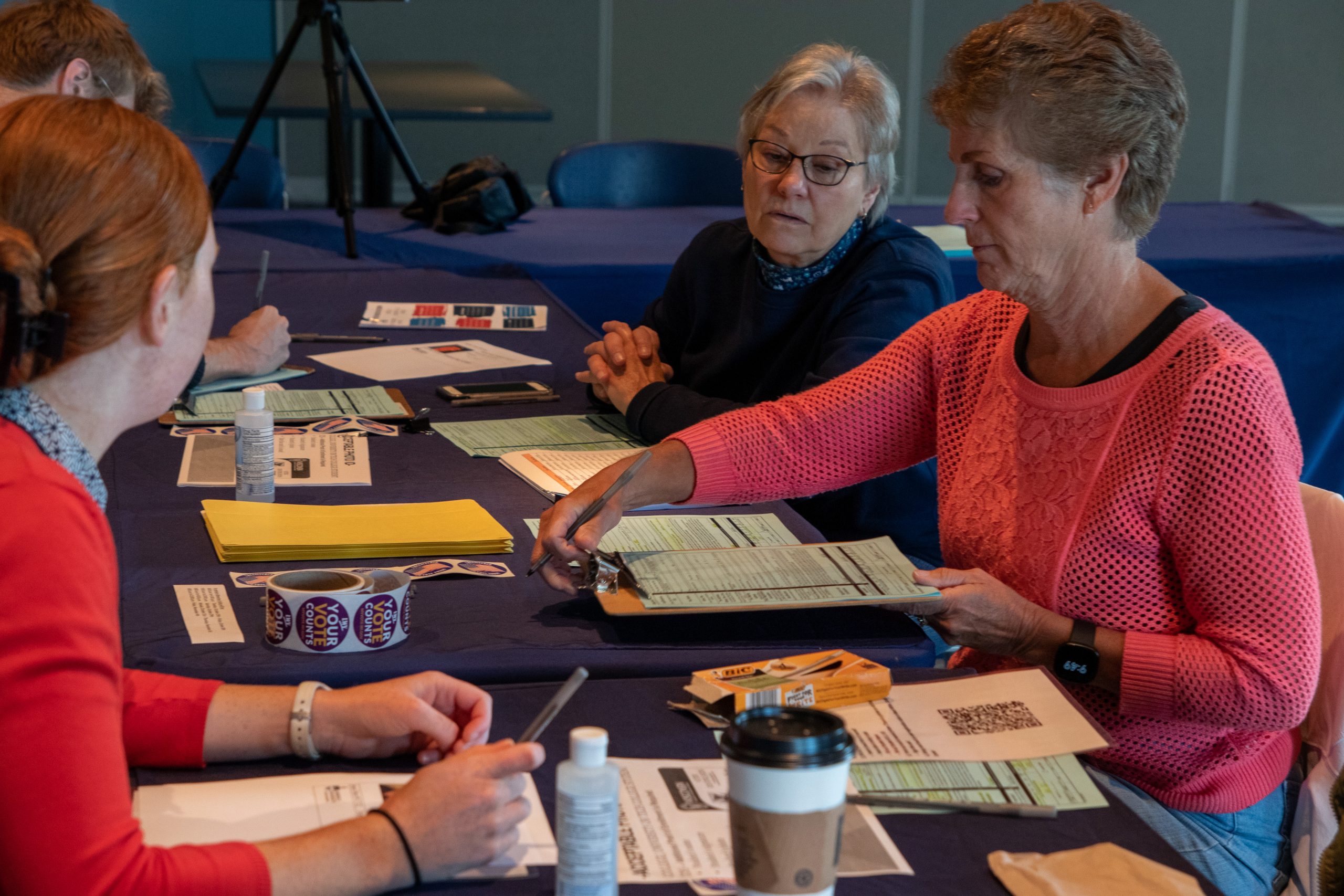 Students are helped to register for the midterm elections. Photo by Rongyan Song.

The Center for Community Engagement (CCE) is working to recruit and register voters for the midterm elections. Several federal and state offices are on the ballot this year, including the positions of U.S. Senator and Governor of Wisconsin.

Sophomore Eliza Peetz, who works in the Civics and Society division of the CCE, stated that the CCE aims to increase voter turnout amongst both the student body and the broader Appleton community through collaborating with voting organizations such as the League of Women Voters and the City Clerk’s office.

Peetz explained that the Help Desk at the Warch Campus Center can print out Voter IDs for voters who do not have a Wisconsin state ID via a simple email request, making it quick and easy for student voters to register. Kami Lynch, the City Clerk of Appleton, is also visiting campus to assist with student voter registration.

The CCE has also arranged for an Election Day shuttle service between Lawrence University and the polling station on Tuesday, Nov. 8, increasing convenience and accessibility.

According to Peetz, the CCE is also trying to increase voter turnout in Appleton’s non-student population through its collaboration with ESTHER (Empowerment, Solidarity, Truth, Hope, Equity and Reform), a local grassroots social justice organization. Through this program, student volunteers can mail pre-addressed voting reminders to Appleton residents.

Peetz explained that her role in the CCE is centered around promoting civic engagement by educating people about their voting rights.

“My focus is making sure that people know how to vote, when to vote and how to choose whether they want to vote in Wisconsin or in the state they are from,” said Peetz. “I also want to bring awareness to things that stop people from voting, such as voter suppression – especially of marginalized people.”

The LU Student Democrats, Lawrence’s chapter of the College Democrats of Wisconsin, are also working to increase voter registration and turnout, although they are not working together with the CCE, as the CCE is a non-partisan organization.

Brewer pointed out that since most of the races in Wisconsin will be extremely close, even a few votes can determine the results of the election. He pointed out that incumbent Wisconsin Governor Tony Evers won his previous election by an average of just two votes per ward.

He continued that statewide races are typically decided by a margin of 1% to 2%, making Wisconsin one of the most competitive states in the country.

“I was here in 2020, and there was not as much effort put into making voting very accessible,” said Tipping. “It seems that they [the CCE] are doing every single thing to make sure it’s easy for students to vote in the state of Wisconsin.”

Tipping, Brewer and Peetz all expressed that the winners of these elections will have influence over critical issues such as abortion access, voting rights and marriage equality.

“A lot of the values we hold dear are, in my opinion, on the ballot,” said Tipping.

Both Brewer and Tipping emphasized that student voter turnout is crucial in close elections, even at a small college like Lawrence.

“We can show them that we matter as Lawrentians, as members of the Appleton community, and as students, and as citizens of Wisconsin,” said Brewer. “We have a lot of leverage in terms of being able to advocate for issues and being able to use our vote and our voice this upcoming election season.”

For students who are not yet registered to vote, another student voter registration event will be held on Monday, Oct. 3 from 10 a.m. to 1 p.m. in the Mead Witter Room of Warch Campus Center.